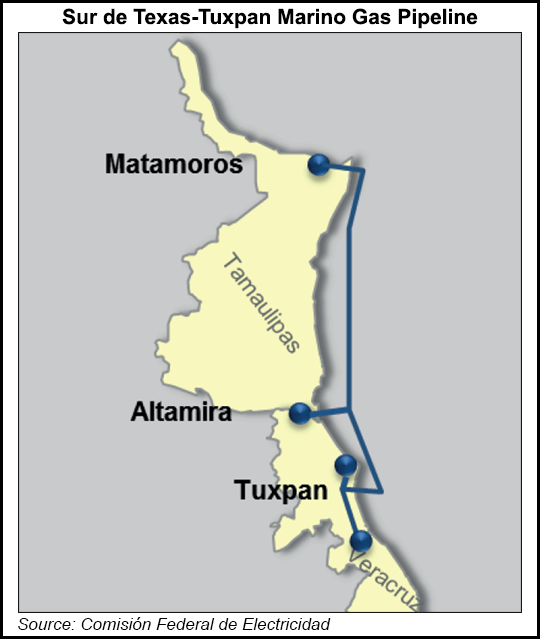 The JV was awarded the contract for the project last June. It will carry natural gas from the United States to Mexico. In-service is expected in June 2018.

The project is supported by a 25-year transportation service agreement with Mexico’s ComisiÃ³n Federal de Electricidad (CFE). The pipeline’s 2.6 Bcf/d capacity is equivalent to about 40% of Mexico’s 2016 natural gas demand.

TransCanada will develop, operate and own 60% of the project, with IEnova owning 40%.

The 42-inch diameter, 497-mile pipeline will begin offshore in the Gulf of Mexico, at the border point near Brownsville, TX, and end in Tuxpan, in the state of Veracruz. It will supply gas to power plants in the states of Tamaulipas and Veracruz and serve the eastern, central and western regions of Mexico. Capacity will be available to others under open access terms, CFE said in announcing the construction start.

In addition to a connection with the Cenagas pipeline system in Altamira, the project will interconnect with TransCanada’s Tamazunchale and Tuxpan-Tula pipelines as well as with other transporters in the region.

According to a project data sheet, CFE had estimated the pipeline’s cost at more than US$4.5 billion, but the IMG bid was about 52% below that estimate at just over US$2.16 billion, CFE said when the contract was awarded.

CFE has to date has promoted the construction of 26 natural gas gas pipelines to serve various regions of the country, said CFE Director General Jaime HernÃ¡ndez. Eight of these have been placed into operation, and another 16 are under construction, including Texas-Tuxpan.

Equinor Optimizing Global Portfolio, Moving by 2030 to 50%-Plus Spending for Renewables, Low Carbon