Australia’s Woodside Petroleum Ltd and BHP Group said Tuesday they would merge their natural gas and oil portfolios in an all-stock transaction estimated to be worth $28 billion, to create one of the biggest producers in the world. 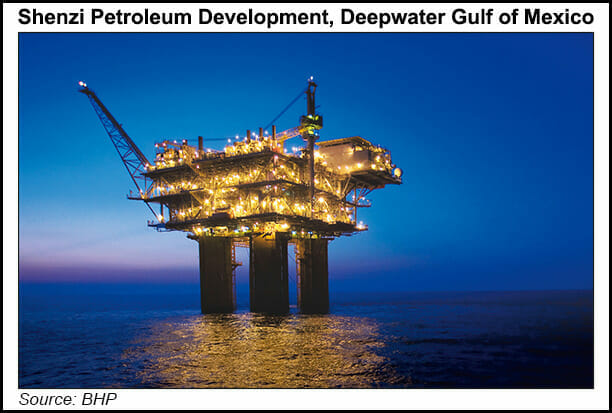 The proposed merger under the Woodside brand would create the largest energy company listed on the Australian stock exchange, with a global top 10 position in the liquefied natural gas (LNG) industry by production.

Woodside operated around 6% of global LNG supply in 2020. Woodside and BHP’s combined assets are forecast to produce around 200 million boe net in 2021. The production mix would be 46% LNG, 29% oil/condensate and 25% Australian gas and liquids.

“Merging Woodside with BHP’s oil and gas business delivers a stronger balance sheet, increased cash flow and enduring financial strength to fund planned developments in the near term and new energy sources into the future,” Woodside CEO Meg O’Neill said. She is to continue as CEO.

“The proven capabilities of both Woodside and BHP will deliver long-term value for shareholders through our geographically diverse and balanced portfolio of tier 1 operating assets and low-cost and low-carbon growth opportunities.”

BHP CEO Mike Henry said the merger “will create an organization with the scale, capability and expertise to meet global demand for key oil and gas resources the world will need over the energy transition.

“Bringing the BHP and Woodside assets together will provide choice for BHP shareholders, unlock synergies in how these assets are managed and allow capital to be deployed to the highest quality opportunities. The merger will also enable the skills, talent and technology of both organizations to build a resilient future as the world’s needs evolve.”

Most of the assets to be combined are in Western Australia and the east coast of the country, as well as in the U.S. Gulf of Mexico, and Trinidad and Tobago.

BHP, until 2018 a big Lower 48 oil and gas operator until it sold the assets to BP plc, remains one of the largest players in the U.S. GOM deepwater, with stakes in Atlantis Phase 3, Mad Dog Phase 2 and Shenzi North. The combination also would have stakes in Senegal’s Sangomar field development. Longer term options include the Wildling project in the U.S. GOM, the Trion field offshore Mexico, Calypso in Trinidad and Tobago, and the Browse LNG project in Australia.

Proved and possible reserves combined are estimated at 2 billion boe-plus, 59% weighted to natural gas and 41% to liquids.

The merger also is expected to help derisk and support a final investment decision later this year for their joint venture (JV), the Scarborough LNG export project in Australia. They plan to sanction Scarborough by the end of 2021, before the proposed merger is completed.

The expanded company, O’Neill said, would remain on course to reduce “carbon emissions from the combined portfolio toward Woodside’s ambition to be net zero by 2050.”

The merged business also is expected to support new energy products and low carbon solutions including hydrogen, ammonia and carbon capture and storage.

Both boards have approved the transaction. The merger is expected to be completed by mid-2022.

BHP has more than 80,000 employees and contractors, primarily in Australia and the Americas. It is among the world’s top producers of iron ore, copper, nickel and metallurgical coal.