Oil and gas producers have slashed $150 billion from their capital expenditure (capex) budgets for the Lower 48 states through 2017, a reduction in capex that’s more than three times that spent in any single country, according to an analysis by Wood Mackenzie. 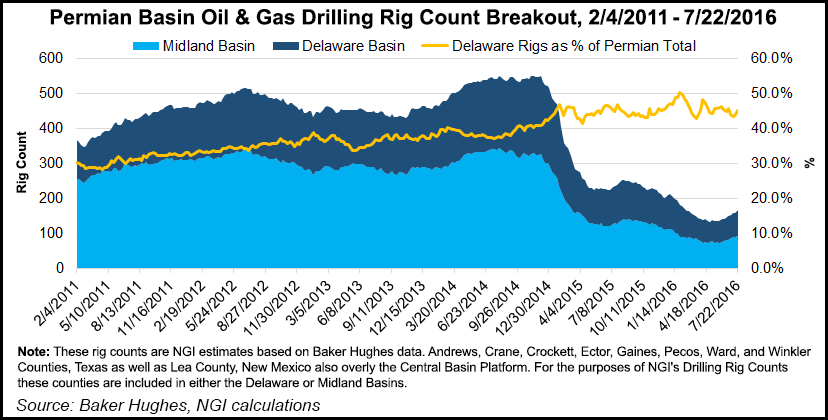 In a report released Thursday, the firm said the cuts have hit especially hard in the Bakken and Eagle Ford shales, accounting for 36% of the capex reduction in 2016 and 2017. The deepest cuts occurred in the Bakken and Three Forks formation, with spending down 66%, or $44 billion. The cut in the Eagle Ford accounted for 20% of the overall total.

“The plays that saw the highest proportion of their capital expenditure cut were in the Eagle Ford and the Bakken,” Jeanie Oudin, Wood Mackenzie’s senior research manager for the Lower 48, said in a statement. “That’s because the two plays were in full-scale development, with most operators’ acreage held by production at the time oil prices began to fall, allowing for a more responsive slowdown in activity.”

Wood Mackenzie noted that with producers focused on completing their large backlog of drilled but uncompleted (DUC) wells at their will as contracts expire, oil and gas production is not currently tied to the rig count, although reduced service costs and overall cost deflation have also fueled the reduction in capex.

“People expected that overall tight oil production would collapse when companies stopped drilling; however, it hasn’t collapsed, it’s only declined,” Oudin said. “Not only have operators built up a backlog of DUC wells, they are also utilizing longer laterals and enhanced completions to increase the productivity of wells as they bring them online. They’re just not adding new volumes as quickly.”

Drilling activity is expected to decline by smaller amounts in the Midland and Delaware basins, in part because many of the rigs deployed there are targeting better plays with stacked pay potential. As a result, the Permian Basin is being viewed as more resilient to the capex reductions, the firm said.

“Combined with our outlook for Permian production growth, this is extremely positive for Midland and Delaware stakeholders,” Oudin said. “The Midland and Delaware basins hold the largest number of undrilled, low-cost tight oil locations in the Lower 48. No other region comes close.”

According to Wood Mackenzie, the firm’s latest analysis shows “mature producers and basin incumbents” have the most remaining DUC inventory considered economic. “Although some of these established operators are less characterized by the high growth metrics of some of their offset acreage peers, they no doubt have a bright and sustainable future,” the firm said.

Last month, a survey conducted by Evercore ISI predicted operators would slash spending in North America by 41% in 2016 (see Shale Daily, June 6). A separate analysis performed by Raymond James & Associates Inc. in April found the biggest capex cuts, up until that point, were made by producers with assets concentrated in the Lower 48 (see Shale Daily, April 4).

Despite the capex cuts, the Energy Information Administration reported last week that U.S. onshore producers are more stable financially today than at any point since crude oil prices crashed in the second half of 2014 (see Shale Daily, July 18).