The stacked pay potential of the Midland Basin’s Wolfcamp Shale has been attracting increasing producer interest and investment, and that’s predicted to grow substantially as the play is further developed, according to Wood Mackenzie. 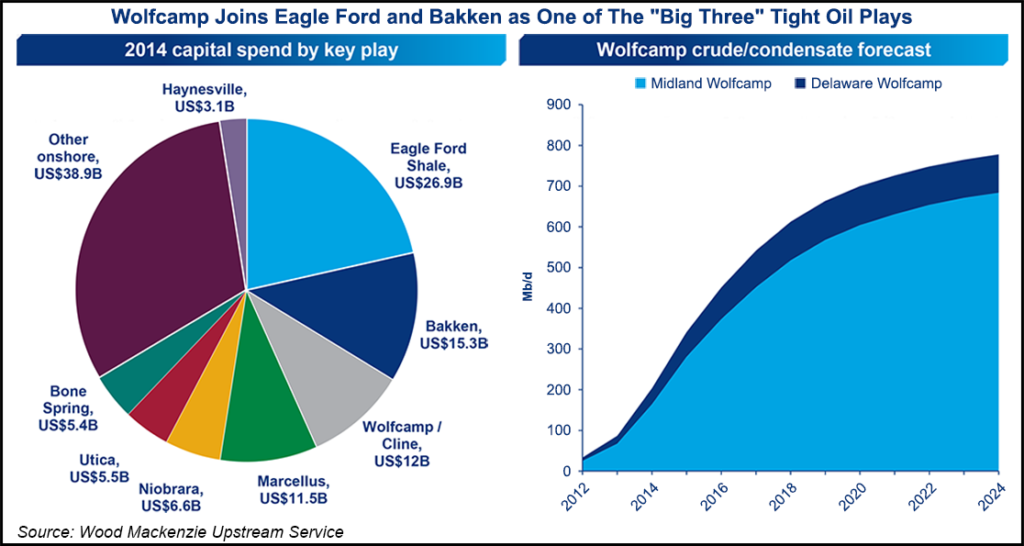 Spending in the Wolfcamp is nearing that of the Bakken Shale, and capital expenditures (capex) in the Texas play is expected to surpass $12 billion this year, bringing it to a level that is about 80% of Bakken spending, said Wood Mackenzie’s Benjamin Shattuck, upstream analyst. The Wolfcamp currently ranks third in tight oil play spending behind the Eagle Ford and the Bakken shales, but it could overtake the Bakken for the No. 2 spot as early as 2017, Shattuck said.

Wolfcamp crude and condensate production is expected to average 200,000 b/d this year and will reach 700,000 b/d by the end of the decade, Shattuck said.

Technological progress in developing stacked pays is what’s behind the rising acreage value in the Midland Basin, Wood Mackenzie said. “While we have seen performance improve across all benches of the Wolfcamp, we are still waiting for an operator to effectively develop multiple benches over a sizeable acreage position,” Shattuck said.

“It’s variable depending on the part of the Permian that you’re in, particularly the Wolfcamp,” Shattuck said of maturity of development. “It’s furthest along probably in the southern Wolfcamp, the southern Midland Basin. We’re far enough along that we’re starting to see small pockets of development, a few sections at a time being developed, targeting multiple benches. We have yet to see a sizeable acreage position be developed with multiple benches. So we’re getting there, but we just haven’t got to a wide-scale development from any one operator yet.”

Wood Mackenzie’s analysis breaks down the Wolfcamp and Cline Shale plays into eight sub-play areas, spanning the Midland and Delaware basins in the larger Permian Basin. Total Wolfcamp crude and condensate production is predicted by the firm to grow to average 200,000 b/d this year, driven by a rapidly growing rig count and improved results from the northern Midland Basin.

The Midland Wolfcamp is outpacing the emerging Delaware Wolfcamp due to higher oil cuts, lower well costs and better supporting infrastructure, according to the firm. With more than 40,000 remaining drilling locations, the Midland Basin is expected to drive production for the next two decades.

Wood Mackenzie said that tracking the Wolfcamp over time has allowed it to distinguish which benches perform best. In the Southern Midland Basin — where the A, B, and C benches of the Wolfcamp have been most targeted — the B bench continues to outperform, followed by the A bench and then the C bench. “It’s really about after five months out that you start to see the different benches perform differently,” Shattuck said.