After winter declines due to unusually harsh weather conditions, oil production growth is back, and the forecast for the next two years calls for steep increases in the Bakken Shale, Permian Basin and Gulf of Mexico (GOM), according to the latest tracking by Genscape Inc., a Louisville, KY-based energy research and consulting firm. 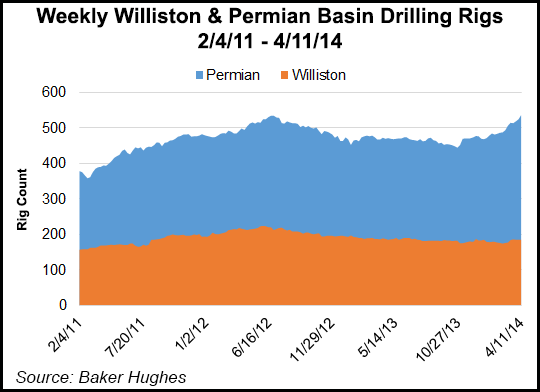 The Permian and Bakken experienced production drops of 70,000 b/d and 50,000 b/d, respectively, in December through February (see Shale Daily, Dec. 5, 2013), but output has returned to pre-December production levels with indications for significant increases through next year.

Aside from the average shut-ins over the three-month period, there were peak-day shut-ins to production of up to 500,000 bbl in the Permian and up to 150,000 bbl for the Bakken, said Genscape’s Randall Collum, managing director for energy, in a webinar Tuesday.

Genscape monitors major pipelines and rail terminals to track crude oil movement from the two onshore basins on a daily basis, said chief oil products analyst Jodi Quinnell, who added that the daily tracking has picked up a slight fallback in Bakken production this month, but she noted that could change before April is complete.

Longer term, Quinnell said Genscape is forecasting for Bakken production to reach 1.2 million b/d by the end of 2015, and it will pass the million-barrel daily milestone very soon. “Even with the setback from the winter, we’re predicting pretty significant growth in the Bakken over the next couple of years,” she said.

In the Permian, where the current production sits at about 1.5 million b/d, Genscape is forecasting that total will be 1.9 million b/d by the end of 2015.

Quinnell said her tracking is picking up “pretty significant increases” in rig counts, including big increases in the numbers of horizontal rigs in the Permian. “We’ve seen an increase of about 114 rigs since low points in June or July last year. We just passed the previous peak that we had experienced in 2012.

“With all of the horizontal rigs moving into the Permian, I believe there is an upside risk to our forecasts” in that the production may be more than predicted. “We’re keeping a close eye on it.”

In the GOM, Genscape is seeing similar production growth, with output reaching 1.6 million b/d by the middle of 2015, from current production levels of 1.3 million b/d.

Simply getting past this brutal winter might be contributing to higher production in these basins, through an increased rig count in both areas, according to NGI’s Shale Daily analysis of Baker Hughes data. Operators have added 11 rigs to the Williston since the rig count reached a recent low of 174 rigs on February 21. Meanwhile, the rig count in the Permian has climbed to 536, after stalling in the 470-490 range for much of the winter.