With less than four weeks to go before Mexico’s potentially transformative midterm elections, pollsters are still trying to get a clear picture of what to expect. 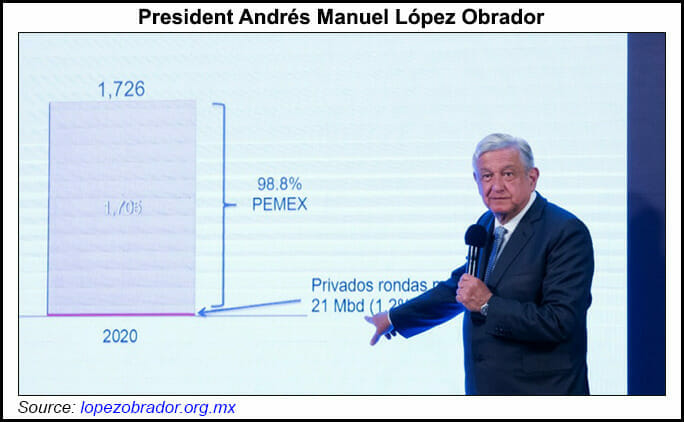 According to the director of public polling at Mexican daily El Financiero, Alejandro Moreno, Mexico remains in a period of “volatility and uncertainty” and a lot can still change before the elections take place.

On June 6, Mexicans will vote in the entire lower house of Congress. They will also cast their ballots in numerous gubernatorial, state legislature and mayoral races.

Wins for President Andrés Manuel López Obrador’s ruling Morena coalition could give him authority to formally overturn the 2013-2014 energy reform. The president has railed against the reform since coming to power at the end of 2018.

The president’s recent moves to bolster state oil company Petróleos Mexicanos and state utility Comisión Federal de Electricidad (CFE) have been met by resistance in the nation’s courts. But a super majority, or a 66% majority in both houses of congress, would give the president the power to change the constitution and override these challenges.

Morena has 60% of the seats in the senate and controls 65% of lower house seats.

Speaking last Thursday (May 6) at an event organized by Washington D.C.-based think tank the Wilson Center, Moreno said the Morena party would probably net gain in total governships, “but the majority in Congress for Morena is uncertain.”

Arguing that López Obrador’s entire “transformation project” is at stake, Moreno said this is one of the “most polarized elections we have seen.” He saw voters as energized and expected turnout to be high and reach around 50%.

Denise Dresser, professor of political science at Instituto Tecnológico Autónomo de Mexico (ITAM), said during the virtual event that López Obrador had “become an increasingly powerful man” and had “dismantled many checks and balances” including in the energy sector leading to “democratic backsliding.”

If he were to get a super majority in both the lower house and senate, “his dream of ruling unobstructed could become a reality.” Fueled by “nostalgic nationalism,” he would be able to return Mexico to a place of “dominant state monopolies,” she said.

Dresser said López Obrador wants his changes to be “permanent, profound and irrevocable” and his “positions on energy and energy reform policy may put the future of North America integration” at risk.

As an example of this, the American Petroleum Institute (API) on Friday (May 7) told the Biden administration that unfair treatment of U.S. energy companies by Mexico’s government is worsening and is likely in violation of the U.S.-Mexico-Canada-Agreement (USMCA). The oil and gas lobbying group had previously warned the Trump administration in June 2020 about López Obrador’s state-centric policies.

However, the president remains popular. George Mason University associate professor Guadalupe Correa-Cabrera suggested that López Obrador’s energy policies are actually supported by his base. There is anger about the “mismanagement of oil funds” during previous administrations, and his supporters back the president’s narrative that regulators and autonomous agencies represent “only economic elites,” she said at the Wilson Center event.

Despite this, Correa-Cabrera said the Morena coalition would probably still fall short of a super majority in the lower house, principally because of the coalition put together by the opposition.