Natural gas liquids (NGLs), a byproduct of oil and gas production, could benefit from global demand and supply disruptions in 2021, paving a path for rising prices as the year wears on, analysts at Raymond James & Associates Inc. said in a new forecast. 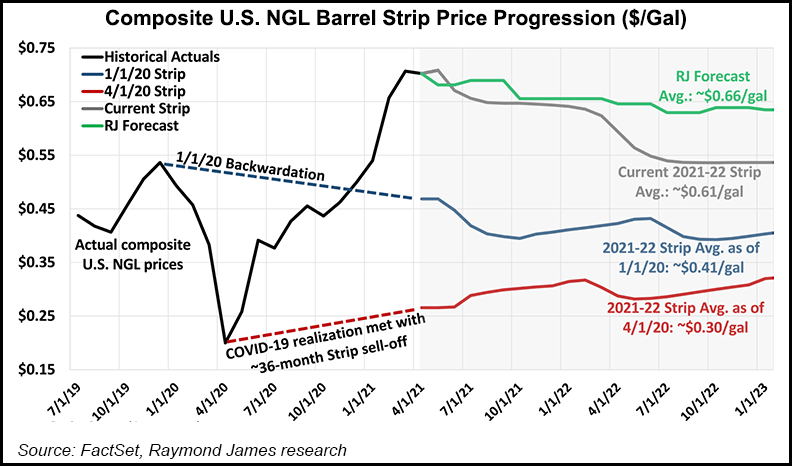 “We still think U.S. NGLs have a pretty bullish set-up, similar to U.S. natural gas,” the Raymond James team said. “We continue to believe the relative U.S. NGL supply headwinds and demand strength in 2021-plus are under-appreciated by the market.”

NGLs are used as fuels as well as feedstocks for petrochemicals used to manufacture plastics and resins. End products include medical equipment and cleaning supplies in demand during the pandemic.

NGL prices have historically been linked to crude oil for most products, including butane and propane, and Henry Hub for ethane. The Raymond James analysts noted that, while domestic oil production has risen this year, it has only crept ahead, with a major interruption during the Artic freeze in February that temporarily derailed the Texas energy sector. Output is not expected to accelerate substantially until at least later this year. Demand for NGLs derived from oil, meanwhile, is holding strong, the analysts said.

The U.S. produced about 11 million b/d of crude oil over the past month, according to U.S. Energy Information Administration data. NGL production swings by about 250,000 b/d for each 1 million b/d change in oil production, the Raymond James analysts said.

Domestic crude production averaged 11.1 million b/d last week, up 100,000 b/d from the prior week and up from the 2021 average to date of about 10.8 million b/d, according to EIA’s latest Weekly Petroleum Status Report. However, supply remains far below the 13.0 million b/d level from a year earlier.

The Organization of the Petroleum Exporting Countries and its allies, aka OPEC-plus, last week agreed to boost crude production in anticipation of increased demand this year. The cartel said it would raise output by 350,000 b/d in May and June, and then increase to as much as 450,000 b/d in July. Saudi Arabia also would begin to unwind cuts it made earlier this year. OPEC has estimated a year/year increase in global oil consumption of 5.6 million b/d in 2021.

Production, however, would still be relatively low. Analysts at BMO Capital Markets estimated the changes represent an increase in OPEC-plus production to 38 million b/d in July from about 35.5 million b/d in March, “largely due to the unwinding of Saudi Arabia’s extra voluntary cut of 1 million b/d.” Prior to the pandemic, the analysts said, the cartel and its allies produced about 41.3 million b/d.