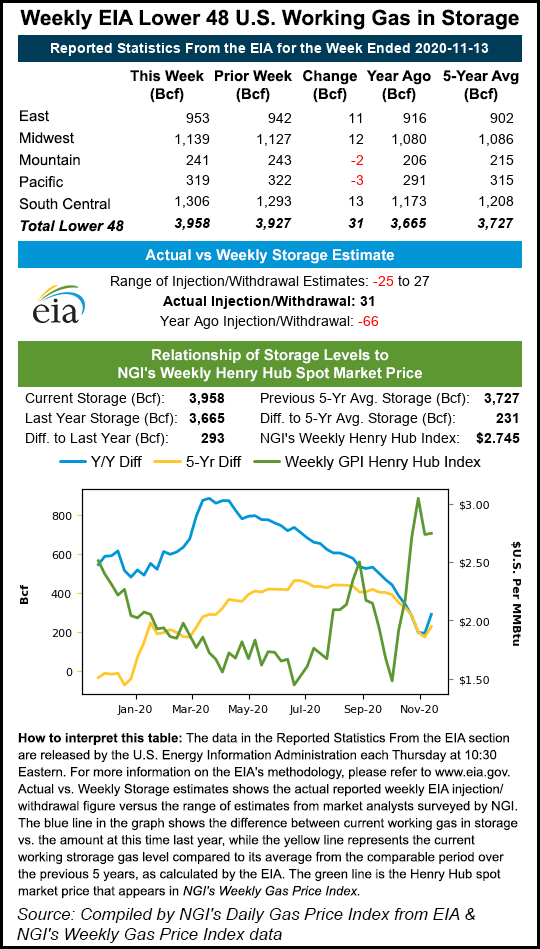 After weather models shifted cooler earlier in the week, they reverted back to a warmer outlook for the rest of November, pointing to weak heating demand nationally, forecasters said.

“Our official outlook is shifted warmer” by a total of four gas-weighted degree days (GWDD), Bespoke Weather Services said Thursday. “While we do see some variability in the pattern, it is not enough to give us a single day colder than normal, and the 15-day period as a whole is more than 55 GWDDs warmer (lower demand) than the long-term normal. In addition, the pattern type remains quite hostile toward any cold as we enter December, meaning it is highly likely that at least the first third of December comes in warm to very warm.”

Bespoke further noted that production, in its dataset, had moved up to 92 Bcf, marking a high since last spring and only about 5 Bcf below the record high set in November 2019. The firm also cited weaker power burns in November relative to what they had been on a weather-adjusted basis in late October.

“These factors have led to loosening from the super tight supply/demand balances we had seen for a few weeks,” Bespoke said. “It is difficult to say where the floor lies given the weather projections and the fact that many folks may simply de-risk for what’s left of 2020.”

The agency reported an injection of 31 Bcf into natural gas storage for the week ending Nov. 13, reflecting above-average temperatures over the eastern two-thirds of the country during the period. The result exceeded the midpoint of analysts’ bearish estimates in several polls.

Prior to the report, a Bloomberg survey produced a median estimate of a 22 Bcf increase, while a Reuters poll landed at a median 19 Bcf injection. A Wall Street Journal poll, meanwhile, found an average injection of 10 Bcf. NGI modeled a 23 Bcf injection.

A year earlier, EIA recorded a 66 Bcf withdrawal for the period.

Thursday’s report marked the second consecutive result that was bearish relative to expectations, following three straight bullish reports earlier in October. EIA reported an injection of 8 Bcf into storage for the week ending Nov. 6. A week earlier, the agency reported a withdrawal of 36 Bcf that marked the first pull of the season.

The November injections confirm “that balances the last two weeks have really loosened compared to what they were in prior weeks,” Bespoke said. “This is due to weakness in weather-adjusted power burns as well as production increasing more than the market was expecting.”

The build for the Nov. 13 week lifted inventories to 3,958 Bcf, above the year-earlier level of 3,665 Bcf and above the five-year average of 3,727 Bcf.  The South Central, Midwest and East regions all reported storage increases.

Analysts are generally expecting a withdrawal with next week’s storage report, which will be released on Wednesday because of the Thanksgiving holiday. Bespoke modeled a 22 Bcf pull.

“Lower prices should gradually tighten things back up some, though we still have a very bearish weather pattern to contend with,” the forecaster said.

U.S. liquefied natural gas (LNG) export volumes to fuel heating needs in Asia and Europe have proven strong this week – near or above 10 Bcf – as they have most of November. Domestic production, however, has climbed in tandem. This leaves Lower 48 heating demand – or lack thereof – as the key driver of gas prices.

The domestic economic backdrop, meanwhile, adds another dose of uncertainty. Coronavirus outbreaks continue to surge throughout the country. The United States reported more than 170,000 cases on Wednesday – near a record level, according to Johns Hopkins University – and hospitalizations reached a record at 79,410.

Three different vaccines have now proven highly effective in studies. The latest news centered on a vaccine being developed by the University of Oxford and AstraZeneca PLC, whose researchers reported successful mid-stage trial results Thursday. Federal officials said they could begin distributing vaccines by early 2021, though they have cautioned it could take several months to inoculate enough people to end the pandemic.

In the meantime, the U.S. economy as well as those overseas remain vulnerable to the virus, its evolving impacts on employment, business activity and energy needs. The U.S. Labor Department on Thursday said initial applications for unemployment benefits climbed significantly last week as virus outbreaks intensified. Initial jobless claims climbed to a seasonally adjusted 742,000, up from the 711,000 filed a week earlier and triple the level reported for several weeks prior to the pandemic early in 2020.

The timing of the current virus surge, “coming just as the holiday season is about to begin and much of the country will move indoors, couldn’t be worse,” Brown said. “While some fear a government lockdown similar to March and April, research suggests that self-isolation is a bigger factor. That is, people will refrain from going out whether or not state or local authorities dictate.”

Cash prices “will remain under pressure through Thanksgiving,” due to the benign weather outlook, “giving traders little reason to step back into the market,” EBW Analytics Group said Thursday.

Brad Harvey, a senior meteorologist for Maxar’s Weather Desk, said warmth dominates the coming six- to 10-day period, with above-average temperatures across the South, the Midwest and large swaths of the East.

“Within the day-to-day details, much-aboves are in the forecast across the South and East early, followed by a broad coverage of aboves and much-aboves across the eastern two-thirds” of the Lower 48 later in November, he said. “Broadly warm conditions continue in the 11- to 15-day period, which is expected to yield above-normal temperatures across much of the U.S. The greatest coverage and intensity of warmth is expected to be across the Midcontinent.”

Elsewhere, price swings were generally much smaller, with single-digit declines across the Midwest and Midcontinent and modest gains in the Rocky Mountains and Appalachia.

Genscape Inc. said Thursday that Southern California Gas Co. storage is running above three-year norms, but it expects a shot of cooler weather next week could start to reduce inventories and bring them in line with typical seasonal patterns. While much of the country warms up, Genscape said southern California could experience below-average temperatures for a week or longer beginning Monday.Prices were mixed in California on Thursday. SoCal Citygate shed 17.5 cents to $3.810, but Malin gained 19.5 cents to $3.105.