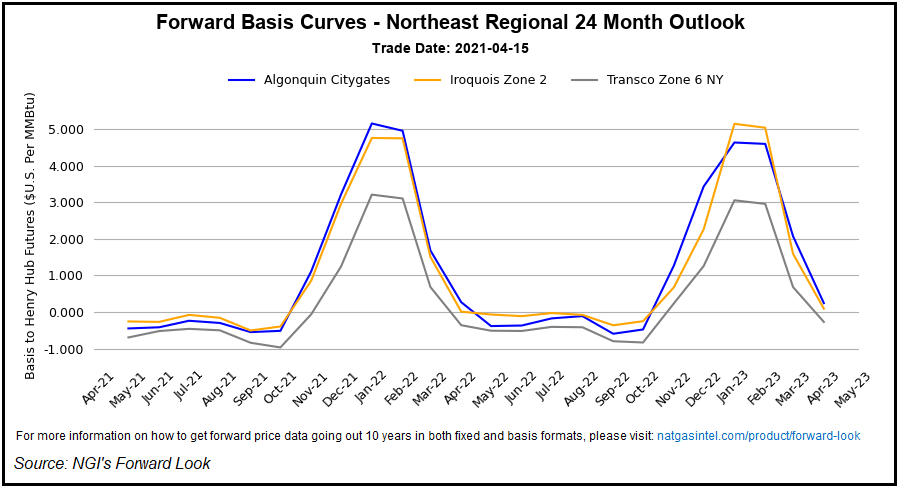 LNG feed gas volumes hovered close to 2021 highs and above 11 Bcf on Friday, NGI data showed, as export destinations in Asia and Europe continued to buy up U.S. supplies of the super-chilled fuel. Pipeline exports to Mexico also held strong, hanging near 7 Bcf.

A round chilly spring weather propelled cash prices most of the week and provided added support for futures. Forecasters are calling for below-average temperatures in the week ahead, too, adding heating-degree days (HDD) and further propelling optimism in markets.

“Overnight, the European model continued to shift significantly cooler, adding 21.3 HDDs over the past 24 hours and extending cooler-than-normal weather through the end of April,” EBW Analytics Group said Friday.

The American model was essentially flat over the same period, EBW noted. It called for cooler temperatures over the coming week but a return to mild spring weather before the end of the month.

EIA on Thursday reported an injection of 61 Bcf natural gas into storage. The result came in comfortably lower than median estimates found by major polls and the year-earlier injection of 68 Bcf.

The latest build lifted inventories to 1,845 Bcf, below the year-earlier level of 2,087 Bcf and slightly above the five-year average of 1,834 Bcf.

Wood Mackenzie analyst Eric Fell said the EIA figure “was a whopping 14 Bcf less than our call.” Compared with gas-weighted degree days and normal seasonality, he said, the reported figure was tight by 2 Bcf/d versus the five-year average.

While the latest storage report showed an 11 Bcf surplus compared with the five-year average, “deficits are forecast to quickly reemerge” given the cool weather of the past week and forecasts for more, EBW said.

The South Central region remains at a 29 Bcf deficit compared with the five-year average, the firm added, while all other regions sit at modest surpluses. With Gulf Coast LNG and pipeline exports to Mexico high, and with the potential for industrial demand increases, “this pattern may strengthen into midsummer,” EBW said.

Industrial demand is poised to mount alongside a strengthening economy in the second half of the year, analysts said. As vaccination programs, while bumpy, continue to progress and brighten a light at the end of the coronavirus pandemic tunnel, energy needs are expected to climb as economic momentum mounts.

Rystad Energy used fuels for automobiles as a barometer. The firm estimated that total global demand for such fuels would rise by 9% in 2021 to 45.1 million b/d and accelerate in 2022 to about 47.5 million b/d. Forecasts for the highest gross domestic product growth in a decade this year in both the United States and China – the world’s two largest economies – girded the Rystad outlook.

Oil prices climbed along with natural gas over the past week, Rystad analyst Bjornar Tonhaugen noted. Energy markets “could find bullish support on positive demand forecasts for the second part of the year and on signs that the U.S. and China are at a good path for economic recovery,” he said.

Cash prices overall declined on Friday, despite unseasonably cool temperatures and chilly rains that pervaded much of the nation’s central and eastern sections.

On Friday, highs in the 40s stretched across swaths of the Midwest, while areas of the Northeast endured wet and even cooler conditions. Boston, for example, was doused with steady downpours and high temperatures hovered in the 30s, National Weather Service data showed.

While weather was in their favor, Northeast prices retreated on Friday after a week of inflation. Prices on average in the region were down more than 20 cents. Algonquin Citygate near Boston shed 30.5 cents to $2.865.

Temperatures were comfortable in the West, with highs in the low 70s in Southern California and upper 70s in the Southwest, creating little demand.

On the pipeline front, starting Sunday and continuing until Tuesday, Creole Trail Pipeline said it would perform maintenance at its Gillis Compressor Station. Operational capacity was expected to fluctuate between roughly 1.2 Bcf/d and 1.45 Bcf/d throughout the event, according to Wood Mackenzie analyst Preston Fussee-Durham.

“Most notably, the largest impact is to be observed on Monday,” he said, “when operational capacity on the pipeline will be reduced to approximately 1.19 Bcf/d – a curtailment of near 0.3 Bcf/d of pipeline throughput capacity.”

However, Fussee-Durham added Friday, “over the past week, observed feed gas deliveries from Creole Trail Pipeline to Sabine Pass liquefaction facilities has only averaged 1.33 Bcf/d, with single-day maximum observed deliveries of 1.42 Bcf/d. As a result, impacts on the order of approximately 0.23 Bcf/d could be observed” on Monday, “with negligible impacts” on the other days.