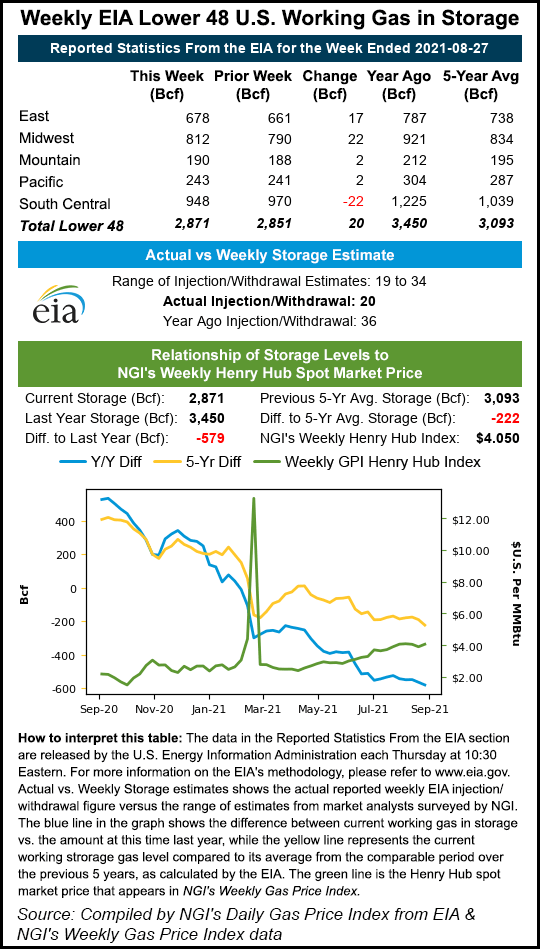 The October Nymex contract advanced 2.6 cents day/day and settled at $4.641/MMBtu. The prompt month had soared 31 cents over the two previous days. November on Thursday gained 2.9 cents to $4.692.

Estimates Thursday showed production holding below 90 Bcf, as it had since late Sunday after Hurricane Ida slammed into Louisiana and forced producers to shut in facilities in the Gulf of Mexico (GOM).

In a midday report on Thursday, the Bureau of Safety and Environmental Enforcement estimated that around 91% of gas production in the GOM, or 2.035 Bcf/d, remained shut in. Nearly 94% of GOM oil output, or 1.70 million b/d, was offline.

Bespoke Weather Services noted that demand had eased as well in parts of the Lower 48, as Ida moved beyond the GOM and through the East Coast Wednesday night and into Thursday. The storm delivered dousing rains to major markets such as Philadelphia and New York City, flooding streets and homes.

Still, cooling demand held steady in the West, and forecasts called for more heat by mid-September. “Our forecast in total is three gas-weighted degree days higher” from a day earlier, Bespoke said, “and it is possible that things move hotter yet in that 11- to 15-day period. The move is not really surprising, given the La Niña base state, which typically leads to hotter weather in the month of September.”

“Obviously, in terms of absolute temperatures, we will see nothing like what we saw in the middle of summer, but demand is demand,” the firm added.  “The fact remains that we are pointed toward under 3.5 Tcf for end-of-season storage levels” and “the overall risk ultimately remains skewed toward more upside until we see notable gains in production.”

The forecasted inventory level could prove insufficient if winter starts early, lasts longer than normal or proves bitter cold over long stretches, Bespoke noted. Output through most of August had already tracked below the 93 Bcf/d level the firm targets.

The latest storage report by the U.S. Energy Information Administration (EIA) amplified the concerns. EIA reported an injection of 20 Bcf natural gas into storage for the week ended Aug. 27. The result was shy of already modest expectations due to robust cooling demand and strong liquefied natural gas (LNG) export levels during the covered week.

Major surveys had pointed to a below-average build in the mid-20s Bcf. NGI modeled a 28 Bcf injection. Last year, EIA recorded a 36 Bcf build for the period. The five-year average increase was 53 Bcf.

The latest build lifted inventories to 2,871 Bcf. Still, that was far below the year-earlier level of 3,450 Bcf and the five-year average of 3,093 Bcf.

Should GOM outages “continue into late September — as appears increasingly possible — the natural gas market focus is likely to be on stagnant production and a low storage trajectory during the last six weeks of the injection season,” EBW Analytics Group said.

What’s more, even with the most intense summer heat likely to fade in coming weeks and winter chills unlikely to settle in for several weeks, markets are looking for LNG volumes to hold strong above 10 Bcf. LNG exports to fuel energy needs in Asia and Europe are elevated amid anemic supplies and imbalance worries on both continents.

LNG feed gas volumes hovered between 10 Bcf and 11 Bcf throughout the summer months, and demand for the super-chilled fuel continues to add pressure on domestic supplies.

“Total U.S. feed gas volumes in recent days have not shown any significant deviations from trends in the previous week, which is likely due to the LNG terminals’ locations away from Hurricane Ida’s path,” said Rystad Energy analyst Emily McClain. “We forecast LNG export volumes to remain strong” and anticipate “no slowdown in cargo ships leaving Gulf Coast ports.”

Next-day cash prices advanced for a second consecutive day, rising across nearly every region, with production down and demand expected to intensify over the coming weekend.

In the central United States, meanwhile, hubs throughout the Midwest and Texas posted gains. Chicago Citygate picked up 11.5 cents to $4.515 and El Paso Permian rose 14.5 cents to $4.445.

Remnants of Ida pushed off the East Coast on Thursday, leaving behind high temperatures in the 70s and 80s. Hubs in the Northeast proved the exception on Thursday. Niagara shed 5.0 cents to $3.850 and Columbia Gas lost 11.5 cents to $3.905.

Cooler air and rains also moved across the northern part of the country, with highs in some parts of the Upper Midwest in the 60s, according to National Weather Service (NWS) data.

That noted, a new round of heat is expected this coming weekend, with high pressure forecasted to intensify and deliver highs in the 80s and 90s across much of the Lower 48. Parts of Texas, the Southwest and California could see highs in the upper 90s and 100s, NWS forecasts showed.

Looking ahead to next week, senior meteorologist Steve Silver at Maxar’s Weather Desk expects above normal temperatures to persist across the West and into the Rockies and Plains, with highs in the 90s in major markets such as Denver and Dallas.

Silver said forecasts for the middle of September also showed warmer trends, with swaths of the East seeing above normal temperatures along with the West.

Coast Guard Capt. Will Watson said much work still lay ahead to reopen maritime traffic along the Mississippi River and the Gulf Intracoastal Waterway near New Orleans. “This is a massive recovery effort,” he said.