Buoyed by an easing of stay-at-home and shutdown mandates amid the ongoing fight against the coronavirus pandemic, May bidweek prices across the Lower 48 emerged from a month of unprecedented demand loss with quarter-plus gains at the majority of pricing hubs. 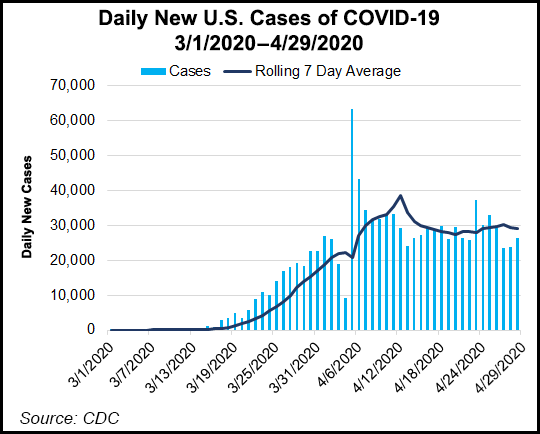 NGI’s May Bidweek National Avg. jumped 29.5 cents to $1.630, well under the May Nymex futures contract, which rolled off the board Tuesday (April 28) at $1.794. Despite the $1 handle, the May futures contract expired considerably higher than lows experienced over the past month and settled at a solid premium to the April contract’s $1.634 expiration.

Indeed, all but one U.S. market continued to price under $2.00 for May, with the exception being PG&E Citygate in northern California, which jumped 19.0 cents month/month to average $2.525. Despite already being the highest-priced market in the region, and across the country, other California markets posted gains of more than 25.0 cents relative to April.

Similar increases extended into the Midcontinent and Midwest, while benchmark Henry Hub May bidweek prices climbed 16.5 cents month/month to $1.795. East Coast points rose mostly between 15.0 cents and 30.0 cents amid some lingering cool weather; May bidweek prices at Transco Zone 6 NY increased 24.0 cents to $1.515.

With the prospects for a rampant decline in oil drilling and less associated gas production, Waha May bidweek prices averaged $1.195, up 98.5 cents month/month.

On Friday, Lower 48 production was down more than 2 Bcf day/day, although such drops are “very common” on the first day of a new month, according to Bespoke Weather Services. The figures often are revised higher, so the firm is taking a cautious approach with the data unless there is additional confirmation in the coming days.

However, the firm noted, “the market is on edge regarding production news.”

The latest analysis from Rystad Energy indicates that the Williston and Permian basins are expected to drive at least 300,000 b/d of shut-in oil supply from Lower 48 operators during May and June, up from about 100,000 b/d of cuts projected for April. The projection is based on early communication from Cimarex Energy Co., ConocoPhillips, Continental Resources Inc., Enerplus Corp., PDC Energy Inc. and Parsley Energy Inc. ExxonMobil and Chevron both reported Permian cuts in their respective 1Q2020 earnings calls on Friday.

With oil pricing still under intense pressure, what the ongoing pullback in drilling means for gas is not yet clear, but a decline in production appears inevitable. Raymond James Research analysts see U.S. associated gas volumes still increasing in 2020 as a result of the massive 2019 exit-rate.

In the thick of seasonably mild weather and with only a slight easing of coronavirus-induced shutdowns, U.S. demand remains in the doldrums. The latest Energy Information Administration (EIA) storage report shows that inventories, coming off a mild winter, already sit nearly 800 Bcf above year-ago levels and 360 Bcf above the five-year average. With most of the traditional injection season still ahead and keeping with the current pace of injection, the market could face an impossible 5 Tcf by the end of October.

However, with market estimates coming in close to the actual EIA storage injection figures for the last two reports in a row, demand destruction may have reached its peak.

Regarding the most recent EIA report, which covered the week ending April 24, Genscape Inc. senior natural gas analyst Eric Fell said that gasoline demand appears to be rebounding and refinery runs increased slightly week/week. Meanwhile, crude stocks grew by 10 million barrels during that time, but the build was smaller than any of the prior four weeks, according to the analyst.

The market is starting to grasp the potential impact of what may be “the most significant oil and product production retrenchment” in the face of the current massive oversupply, according to Price Futures Group analyst Phil Flynn. There are still concerns about June crude oil delivery as Cushing, OK, storage is filling, yet the pace of increases is suggesting that some producers are considering alternative means of oil storage.

Some frack water containers are now being repurposed from carrying frack wastewater to storing barrels of oil, Flynn said. “Because of the enormous contango in the futures markets, people are looking at more ingenious ways to save it. You can still make big money if you can find storage. Buy it today and lock in a much higher price in the future when demand comes back, and production still will be restrained.”

Meanwhile, there are still major uncertainties on the demand side. Although the economy has started to rise from the ashes, one of the United States’ most important sources of gas demand remains mired in gloom and doom. More than 20 liquefied natural gas (LNG) cargoes reportedly have been canceled for June, and some projections point to cancellations continuing through September.

Energy Aspects pointed out that no remaining Japan Korea Marker (JKM) 2020 delivery contracts are more than 50 cents/MMBtu above the Dutch Title Transfer Facility (TTF), meaning that the JKM price is not pricing in the higher freight costs for U.S. spot cargoes going to Northeast Asia instead of Europe.

“If there is a substantial uptick in Northeast Asian demand, then the JKM will need to at least clear the freight differential to the TTF to attract US spot cargoes,” Energy Aspects analysts said.

The TTF 4Q20 contract is pricing at Henry Hub plus LNG logistics costs given that U.S. spot cargoes have become the marginal source of European supply, according to Energy Aspects. The firm sees “some limited downside potential” for TTF 4Q20 prices if Europe fills Ukrainian storage. But price direction also largely depends on the evolution of Henry Hub prices, which are in a “tug of war” between falling domestic demand because of coronavirus (COVID-19) effects and associated gas production winding down in response to the crash in global oil prices.

“There could be upside for the TTF 4Q20 if U.S. gas production declines significantly outpace our forecast,” Energy Aspects said.