No candidate has emerged to adopt a C$5 billion ($4 billion) orphan pipeline project deserted in British Columbia (BC) by former sole customer Pacific NorthWest LNG, according to TransCanada Corp. 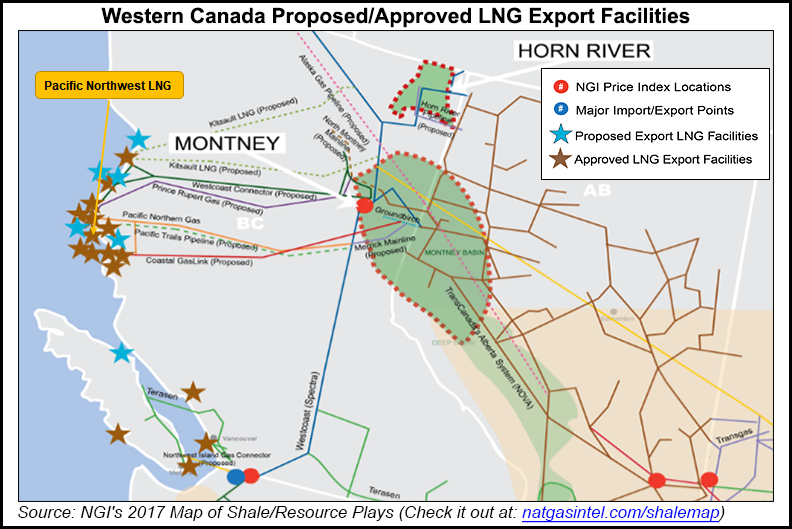 TransCanada made the admission in a written clarification requested by the National Energy Board (NEB) in response to a successful environmental protest lawsuit. Canada’s Federal Court of Appeal ordered an NEB hearing on a demand to explain why national authorities set aside jurisdiction over export projects to leave approvals of PRGT up to provincial regulators, the BC Oil and Gas Commission and the BC Environmental Assessment Office.

National supervision of cross-border industry has been accepted by a request for NEB approval of an alternate route for gas stranded by the LNG terminal cancellation to markets across Canada and the United States.

TransCanada has asked to convert its proposed North Montney Mainline, originally approved to fill PRGT, into an addition to its Alberta and BC collection grid, Nova Gas Transmission Ltd.

Obeying the court order is no longer necessary because the demise of the LNG export terminal dramatically changed the gas outlook, TransCanada said.

“At this point, without a customer, and with NGTL’s variance application, there is no link between a potential project carried out under the existing provincial permits and either an international or interprovincial market or undertaking,” said TransCanada.

“If another customer is found for a project under those permits, then its scope, as well as any functional integration or common management, control, and direction with any other undertaking, would be determined in the future.”

No target dates for finding new support for PRGT were set, and no prospective customers were identified.

As a drilling partnership led by Petronas subsidiary Progress Energy, titled the North Montney Joint Venture, the group holds an 800,000-acre drilling rights spread in the richest, most accessible BC and Alberta shale gas formation.

The Asian group’s long-range agenda calls for large-scale gas development. The North Montney Mainline was designed to support the first stage of PRGT, which was planned to start at 2 Bcf/d with built-in capacity to expand to 3.6 Bcf/d.