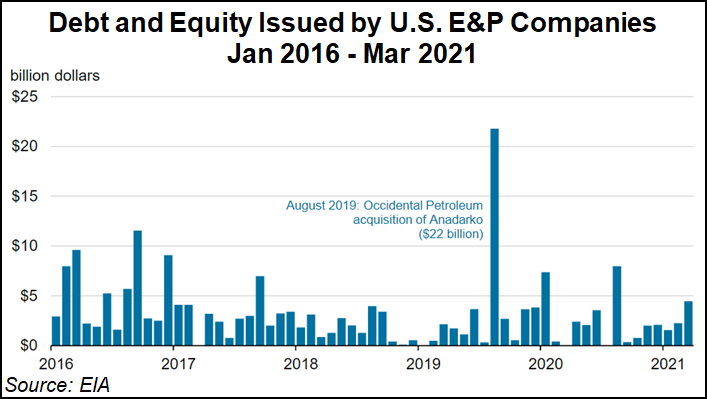 Companies are using proceeds to pay down more expensive legacy debt but also positioning themselves to ramp up production should higher oil prices hold up amid an anticipated bounce this year in demand for transportation fuels derived from crude, the U.S. Energy Information Administration (EIA) said in a report Friday.

Based on company announcements, the agency estimated the amount of debt and equity issued by public E&Ps totaled $4.4 billion in March, marking a high point since August of 2020. Since September of last year, the monthly total has increased from the previous month in all but one month, EIA said.

Brent crude prices averaged less than $40/bbl 2Q2020, when coronavirus outbreaks grew widespread and travel ground to a halt. But as the United States and other major countries adapted to the pandemic, oil prices gradually recovered and, amid vaccine rollouts and rosy economic forecasts for this year, Brent prices averaged about $65/bbl in March and are hovering around that level in April.

Equity investors and debt markets are increasingly optimistic about the prospects for oil producers this year given the pandemic outlook, gradually rising rig counts and the fact that many U.S. producers can generate healthy profits with oil in the $60s, said Samco Capital Markets’ Jacob Thompson, a managing director. He told NGI that markets “are clearly more receptive now than a year ago because they anticipate increased production.”

Total oil and gas rig counts in the United States remain well below pre-pandemic levels, but they have climbed this year, Thompson noted. Should Brent prices rise into the $70s along with a genuine surge in demand for gasoline and jet fuel as vaccines take hold, production could jump. Most E&Ps are conservative at this stage, but should oil prices eclipse the $70-75 threshold, the potential for profits could be too enticing to pass up, he said.

EIA noted that U.S. gasoline demand has been strong in recent weeks. Consumption averaged 8.9 million b/d over the past month, up more than 60% from the same period a year earlier. Jet fuel has yet to rebound similarly, but should it follow suit this summer, oil prices could gather further momentum, analysts say.

The Organization of the Petroleum Exporting Countries and its allies, aka OPEC-plus, recently decided to begin boosting their output in May, citing expectations for meaningfully stronger demand. The cartel agreed to add more than 2 million b/d into the market by July.

Still, analysts say that, should vaccine efforts prove successful by summer in the United States and other major economies, demand could outstrip output and necessitate large draws from stockpiles.

“If demand recovers this summer, as is widely expected, we find that OPEC-plus might need to ramp up supply far beyond current July 2021 targets” – perhaps twice as much, Rodriguez-Masiu said. “Otherwise we may see huge crude stock draws in August and September.”

Because of those expectations, capital markets are opening up to energy companies, and producers have incentive to at least prepare for a new era of higher output. EIA, by extension, is forecasting a steady rise. It estimated U.S. crude production would increase from 10.7 million b/d in 1Q2021 to 12.2 million b/d in Q42022.

During first quarter earnings calls in April, meanwhile, banks with substantial exposure to the energy sector were generally optimistic about the outlook for oil and gas companies this year and into next. Executives said a recovery in oil prices combined with an anticipated end to the pandemic have effectively eased their worries about lofty energy loan losses.

That noted, banks said lending to oil and gas companies remains light this year relative to before the pandemic, and while some anticipate loan growth over the course of 2021 to support rising oil and associated gas production, most remain cautious long term. Bankers are citing the attention in the United States and globally on renewable fuels. Increasingly, governments say renewables should supplant oil and other fossil fuels in the coming years to combat climate change.

“We’re very aware of potential impacts,” Regions Financial CEO John Turner said during an earnings call Friday. When the Birmingham, AL-based bank, long a prominent energy lender, looks beyond this year and next, it plans to emphasize renewables over fossil fuels. “We understand the exposure we have within our portfolio…We are continuing to look for opportunities to develop capabilities that would support the transition to a more climate-friendly environment.”

Thompson said such commentary is becoming common and points to a future where traditional bank loans may prove more difficult for oil and gas companies to secure. This may add to the interest in tapping capital markets when periods of opportunity emerge.

“It’s a much better environment today for oil and gas than a year ago – much better,” Thompson said. “But when you look at the big picture, it’s not great either. The near term is promising – second half of this year, into next – but longer term, there a lot of questions about the future of oil, and bankers are very cautious about the answers.”