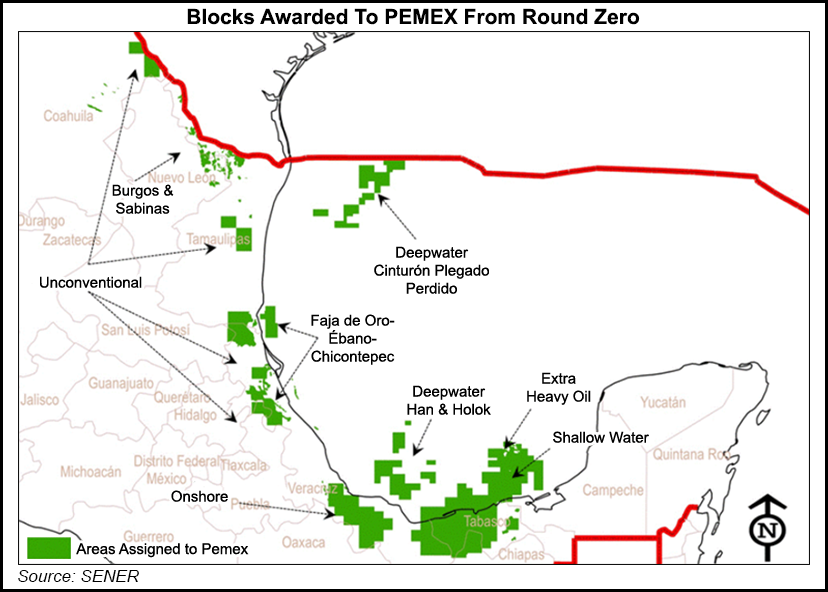 Under the Round Zero process in 2014, CNH awarded 108 asignaciones, or allocations, to Pemex. The acreage contained 83% of Mexico’s 2P (proved plus probable) oil and gas reserves, and 21% of the country’s prospective resources.

The law mandated a three-year exploration period for each area, with the possibility of a two-year extension, which Pemex sought and obtained for the 52 blocks in question.

In the event Pemex did not fulfill its exploration plans at any of the allocations by August 27, 2019, the law mandated that the areas be returned to CNH, which would in turn place the blocks on offer to firms from around the world in competitive bid rounds.

“Unfortunately, in the majority of the cases, [the exploration] plans were not fulfilled,” CNH commissioner Héctor Moreira said Friday.

With the deadline looming, energy ministry Sener asked CNH to make an exception and award 64 “new” allocations to Pemex, including all 52 areas that were set to be revoked.

Commissioners approved the measure by a 3-1 margin, citing the indefinite suspension under president Andrés Manuel López Obrador of bid rounds and farmout tenders for stakes in Pemex acreage as a decisive factor in the decision.

“The energy ministry does not foresee…a subsequent tender for the awarding of exploration and extraction contracts,” CNH said Friday in a press release, “therefore the authorization of the allocations is the most adequate mechanism for the interest of the state in terms of production and guarantee of supply of hydrocarbons…”

Moreira cited a “fundamental difference” between the current circumstances and those of 2017, when the two-year extensions were granted.

“We have a new government with a clear, explicit and prioritized commitment to strengthen [Pemex],” he said.

“We think that by working together, each one within their attributions, CNH, Sener and PEP…can achieve the complete fulfillment of the proposed objectives, goals and activities.”

Moreira said that since CNH cannot legally attach binding conditions to the ruling, CNH instead attached a series of recommendations, whose implementation will be up to Sener.

For example, CNH recommended that Sener warn Pemex that CNH will revise the progress made by Pemex on its work commitments at the allocations.

CNH cited that since Sener itself said it does not expect more tenders, replenishment of reserves and future supply of hydrocarbons will have to come entirely from Pemex allocations.

CNH also recommended that Pemex be required to submit an exploration plan for each block, and that the plans be sufficient to attain the reserves replacement goals laid out in Pemex’s 2019-2023 business plan.

The business plan states a goal of adding 1.3 billion boe of 3P (proved, probable and possible) reserves annually from 2019-2023.

Commissioner Serio Pimentel, the sole dissenting vote, argued that the best way to strengthen Pemex is through farmout tenders and bid rounds.

Imports of liquefied natural gas (LNG) to Latin America fell by 4.2 million tons (Mt), or 32%, during January-September versus the same period in 2019 as the coronavirus ravaged the region’s economies, according to new analysis by data intelligence firm Kpler. Latin America has seen a particularly sharp decline this year compared to other LNG-importing…