The collapse of oil prices has created headwinds for large liquefied natural gas (LNG) liquefaction projects, but the developer of two smaller-scale projects on the Texas coast sees a silver lining in declining project costs and the advantages of a Henry Hub index. One of its projects is being up-sized, in fact. 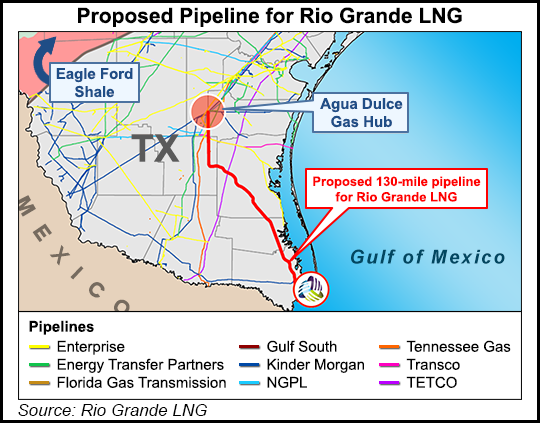 NextDecade LLC last week said it had doubled the acreage in its earlier lease agreement with the Port of Brownsville to grow the site for its proposed Rio Grande LNG export terminal to 1,000 acres. “NextDecade has taken a major step forward by securing such a prime site for our Rio Grande LNG project,” said CEO Kathleen Eisbrenner.

The Brownsville terminal is one of two that NextDecade plans for the Gulf Coast. The other would be in Galveston (see Daily GPI, Sept. 25, 2014). Both terminals would be of a design based upon an existing terminal developed in Peru by energy infrastructure company CB&I, which is the preferred front-end engineering design (FEED) contractor for both Texas projects, Eisbrenner said. Last fall, NextDecade secured backing from York Capital Management Global Advisors LLC (see Daily GPI, Oct. 13, 2014).

Eisbrenner said having two terminals so close together, about a 400-mile drive apart, affords operational flexibility that could benefit customers. If one site is down for maintenance, the other could take up the slack, for instance.

“We’ll manage our portfolio to make sure we optimize the total deliverability as opposed to just each site individually,” Eisbrenner said. “Obviously, we’re going to design and build our own pipelines for each to liquidity points in Texas, but we’re also looking at the potential of taking some storage capacity in addition to pipeline capacity to kind of enhance the interconnectedness of Galveston and Brownsville.”

While large-scale LNG projects, particularly in Australia, have suffered from escalating costs and the oil market turnaround, which has made oil-indexed LNG contracts unprofitable, the oil price crash could be a good thing for developers like NextDecade, Eisbrenner said.

“I think, ironically, what happened with oil prices happened so fast and they fell so hard that it is a benefit to our projects,” she said. “Other projects around the world that were planning to be based on oil-denominated sales are not economic at today’s oil price or the forward curve for oil.

“However, Henry Hub-denominated [pricing] — especially with the first or second coldest winter ever, and we’re still below $3.00 for the feedstock — makes our project quite attractive in worldwide terms. I think the combination of that and the difficulty for the majors to be able to continue to fund mega-projects — and therefore the announcements of either cancellations or delays in these projects — actually bodes very well for our project.”

With the pullback in upstream oil and gas activity, and the delay/cancellation of some infrastructure projects, Eisbrenner sees declining project costs on the horizon. NextDecade expects to be entering the FEED stage for Brownsville in a month or so, and then it will sharpen cost estimates.

“It was only six months ago that everybody was worried about capex risks to the upside,” Eisbrenner said. “Now, I think, there’s probably some potential, maybe more potential, to bring capex costs down. We’re still holding at the moment for a notional $850 per ton capex expectation [for Brownsville].”

That estimate would include a turning basin, a couple of jetties, a 129-mile pipeline and gas treatment facilities in addition to the first trains of liquefaction at about $500 per ton of capacity. Adding financing and owners’ costs on top of that gets the total estimate to about $1,000 per ton. “But we’re hoping in the current environment over the next two years to get those costs lowered,” she said.

A few years ago, The Woodlands, TX-based NextDecade was planning to develop a terminal at the Port of Corpus Christi, TX, with floating liquefaction (see Daily GPI, Dec. 20, 2012). This would have allowed for a portion of the facility to be constructed in Korea at lower cost. However, those plans fell through when a partner pulled out and the site lease was lost. Brownsville and Galveston are land-based projects and won’t make use of low-cost shipbuilding in Korea.

A few other LNG export projects have been proposed for the Port of Brownsville, which is big enough to accommodate all of them, according to Eisbrenner. Which projects and how many get built will be up to the market. Multiple projects could benefit from economies of scale to be had by constructing a larger pipeline to deliver feedstock.

“…[P]ipes need to get built down to Brownsville for any of these projects,” Eisbrenner said. “The economies of scale of pipelines are better when they’re bigger…[I]n our FERC filing, you’ll see that we’ve engineered for two 42-inch [diameter] pipelines, not that we would build two pipelines at the same time, but we’ve designed for that.”

NextDecade has filed at the U.S. Department of Energy for free trade agreement (FTA) and non-FTA export authorizations. However, the focus right now is on the Federal Energy Regulatory Commission permitting process. A pre-filing at FERC is imminent for Brownsville, and one for the Galveston project is expected at mid-year.

If they come to fruition, NextDecade’s Gulf Coast projects will be among the second wave of U.S. liquefaction/export capacity.

“I’d like to be first, but we weren’t first so we’ll be second,” Eisbrenner said. “But there’s an opportunity for us to actually come online more efficiently than the first wave. That’s going to be one of our priorities.”