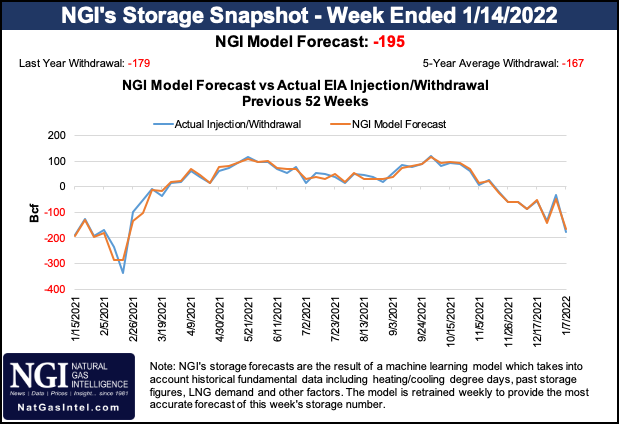 NGI’s Spot Gas National Avg. dropped $1.280 to $5.510 as prices pulled back sharply in the volatile Northeast amid a spate of moderate weather to start the week.

NatGasWeather said forecasts showed mild conditions would push across the country through Wednesday. However, heating demand “is still on track to spike late this week as an Arctic blast sweeps across the Midwest and East with areas of snow” and subzero temperatures. This is to be “aided by lows of 20s and 30s into portions of the southern United States. A reinforcing Arctic shot is expected Jan. 24-27 to keep strong national demand going” and when “the pattern remains plenty cold enough to impress.”

At the same time, he noted production remained light relative to recent highs and demand for liquefied natural gas (LNG) is elevated.

“LNG feed gas demand briefly reached a new record high above 13.2 Bcf/d on Sunday” before ticking modestly lower as the trading week commenced, Rubin said. Volumes had climbed above 13 Bcf last week as well, amid solid demand from Asia and Europe for American deliveries of the super-chilled fuel.

Europe is especially short on supplies following extreme weather and robust demand in 2021, and pipeline flows from Russia have proven lighter than hoped amid political strife between that country and Ukraine.

Output was estimated at around 94 Bcf on Tuesday, about 2 Bcf/d below December levels, and the coming winter chill in the South could force further production interruptions – after an early January bout of brutal cold forced production curtailments. “Production freeze-offs remain a key wildcard,” Rubin said.

Looking ahead to Thursday’s U.S. Energy Information Administration (EIA), analysts are expecting the steepest pull of the winter season to date.

NGI estimated a withdrawal of 195 Bcf for the week ended Jan 14. That would compare with an actual pull of 179 Bcf a year earlier and a five-year average of 167 Bcf.

Bespoke Weather Services also predicted a 195 Bcf draw with the next EIA print and preliminary estimated decreases of 200 Bcf or more for the final two weeks of January.

Last week, EIA reported a pull of 179 Bcf natural gas from underground inventories for the week ended Jan. 7. The draw decreased inventories to 3,016 Bcf, leaving stocks below the year-earlier level of 3,215 Bcf but above the five-year average of 2,944 Bcf.

It “appears that this January will wind up the coldest January since 2014,” Bespoke said.

“The main question now is whether or not the colder pattern hangs on into February,” the firm added. “We have discussed the idea of a more classic La Niña state returning into February, which would shift colder risks out into the West, allowing the East to warm, and there are hints of that now late in the 11- to 15-day model projections. It is possible that models are too fast with timing, but we do continue to favor such a transition down the road.”

Meanwhile, commercial and industrial demand is steady and could increase this year along with further economic expansion. Anticipated economic growth quells, to a degree, worries about the ongoing surge of the coronavirus Omicron variant.

In a new forecast, the American Bankers Association’s (ABA) economic advisory committee estimated U.S. economic growth would slow from an inflation-adjusted 5.5% year/year pace in the fourth quarter of 2021 to 3.3% this year and 2.3% in 2023.

The ABA expects the economy, while easing from the red-hot pace of 2021, to spur continued gains in employment this year, driving down the unemployment rate from 3.9% at the start of the year to 3.5% at year-end.

“We are knocking on the door of full employment,” said Morgan Stanley’s Ellen Zentner, chief U.S. economist and head of the ABA committee. “The tight labor market continues to drive wage gains across all income segments, which will encourage more people to go back to work.”

That, in turn, could add to commercial and industrial consumption of natural gas.

Spot prices sputtered throughout the Northeast on Tuesday following strong gains a week earlier. Temperatures were mild in the region Tuesday and were expected to warm further Wednesday.

Seasonally comfortable temperatures permeated the nation’s midsection on Tuesday, with highs around 50 degrees in the Northern Plains. The pattern was headed for the East by Wednesday.

However, as NatGasWeather noted, demand is expected to rapidly intensify again beginning Thursday and continue into the weekend, as frosty air and winter storms cruise from the Midwest to the East Coast.

Looking to the final week of January, the firm said, “colder-than-normal temperatures will cover the Midwest and eastern half of the U.S. with lows of minus 20s to 20s for strong national demand, aided at times by chilly lows of 10s and 30s into the southeastern U.S.”

In contrast, the West will be mild “as high pressure rules with highs of 50s to 70s.”