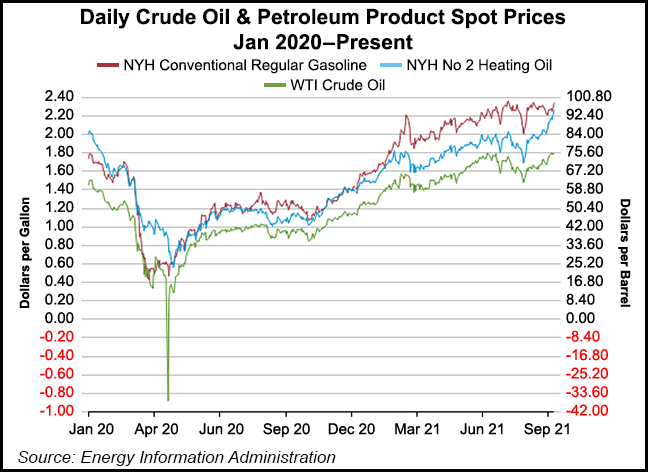 EIA’s Weekly Petroleum Status Report, released Wednesday, showed production climbed to 11.3 million b/d for the week ended Oct. 1, up from 11.1 million b/d the prior week. Oil imports, meanwhile, rose 39% week/week to 4.9 million b/d as the market addressed steadily increasing demand amid a growing economy and increased travel as the U.S. adapts to the coronavirus pandemic.

At 420.9 million bbl, however, inventories as of Oct. 1 were still 7% below the five-year average. This reflects a slow production recovery following steep output cuts made in 2020 in response to the demand destruction imposed by virus outbreaks. U.S. output remains more than 1.0 million b/d below the 2020 peak reached last March before the pandemic.

At the same time, demand this year rebounded and continues to hold well above 2020 levels.

Analysts say the United States, via imports, is trying to beef up oil stocks to align supply with demand. Globally, meanwhile, producers are ramping up output in the second half of this year to address rising international needs, including in heavily populated countries such as China and India. But they are all playing catchup, Rystad Energy analysts said.

The imbalance has fueled a furious price rally. International benchmark Brent crude oil futures have traded above $82/bbl at points this week — the highest level since before the pandemic — while U.S. benchmark West Texas Intermediate prices have approached the $80 level. Both contracts are up about 60% for the year.

Global natural gas supply challenges that have sent futures soaring over the past month have added to the demand for oil. Gas demand is surging in Asia as well as in Europe, where supplies are precariously light. This is motivating corners of the power sector to switch from gas to oil ahead of winter because natural gas futures have skyrocketed overseas.

“…Never before have power prices risen so far, so fast,” said Societe Generale Group analysts led by Michael Haigh. “We are only a few days into autumn” and “temperatures are still mild. A cold winter could cause severe problems.”

With natural gas in a frenzy of its own and adding to oil supply challenges, and with U.S. output still relatively soft, the global market is turning to the Organization of the Petroleum Exporting Countries (OPEC) and its allies, aka OPEC-plus.

That is 100,000 b/d more than the pace of OPEC-plus increases currently in the works. The cartel on Monday approved another 400,000 b/d production increase for next month, continuing a plan launched in August.

However, Dickson said that, barring more aggressive increases by the cartel, supply could trail demand into 2022.

“The supply response can only be described as lagging,” Dickson said, despite the “robust price environment.”