Natural gas futures floundered on Tuesday as the domestic weather outlook shifted increasingly bearish, production ticked up and energy commodities broadly dipped lower amid pandemic flare-ups and the potential for a cease-fire in Ukraine. 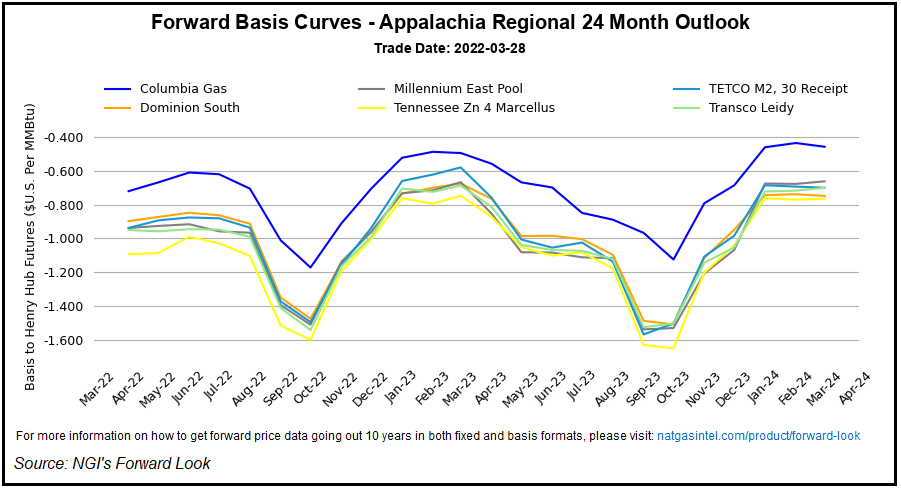 On its final day as the prompt month, the April Nymex gas futures contract lost 17.2 cents day/day and settled at $5.336/MMBtu before rolling off the board. May fell 20.8 cents to $5.330. Futures faltered for a second straight day – after rallying throughout the prior week.

U.S. production reached 95.5 Bcf on Tuesday, up more than a 1 Bcf from the prior week. This put output near 2022 highs of around 96 Bcf, Bloomberg data showed.

At the same time, the latest weather data Tuesday extended warmer trends as both the American and European models advertised mostly mild temperatures for the northern United States this weekend and through next week, according to NatGasWeather.

“A relatively cool weather system is still expected to track across the northern U.S. this weekend …However, the amount of subfreezing air with this system decreased yesterday and overnight, resulting in only a minor bump in demand,” the firm said.

For the April 5-12 time frame, the latest data showed a pattern that could lead to widespread comfortable conditions for the Lower 48, according to the forecaster.

NatGasWeather also noted reports from Ukrainian and Russian officials touting progress in cease-fire talks that eased war-induced concerns about oil and gas shortages. This, the firm said, put downward pressure on prices across most commodity markets. That noted, the Associated Press reported that Russia continued lethal attacks across Ukraine Tuesday.

At the same time, increasingly widespread mobility restrictions to slow coronavirus outbreaks in China, the world’s second-largest economy, threatened to curb demand for travel fuels and natural gas. Brent crude, the international oil benchmark, dropped nearly 10% over the course of Monday and Tuesday, though prices remained elevated and well above $100/bbl.

China and parts of Europe are grappling with a subvariant of the coronavirus Omicron strain that is spreading rapidly. China in recent days locked down much of Shanghai, the country’s biggest city with more than 20 million residents.

China is the largest importer of liquefied natural gas (LNG). The Shanghai lockdowns have curbed power and industrial gas demand and, as a result, China has resold LNG cargoes this month, according to Rystad Energy analyst Vinicius Romano.

Additionally, in Western Europe, German officials this week estimated they are tallying nearly 300,000 virus cases daily — more than six times the rate that the United States has reported in recent days. This could slow LNG demand in Europe as well.

Tapered European LNG needs could further ease global supply worries that have been amplified by Russia’s invasion of Ukraine over the past five weeks. Europe is trying to wind down its use of Russian gas in objection to the war. This has ramped up demand for U.S. LNG exports and fueled price rallies, including the five-day surge in Nymex gas futures last week. American exporters have operated near capacity throughout March.

Fresh coronavirus challenges, however, could at least provide a reprieve, led by the impacts of China’s actions in Shanghai, Romano said.

Last week, the Biden administration and European Union (EU) announced a plan to ensure Western supplies of natural gas to the continent through 2022 and beyond. The two set a joint goal to send nearly 1.5 Bcf/d of additional LNG to EU countries this year.

However, as analysts at Goldman Sachs Group Inc. noted, even if demand from Europe holds strong, markets may already have baked in the impact of Russia’s war in Ukraine on U.S. LNG demand this year, given that U.S. exporters are now effectively maxed out.

That noted, the Goldman team said that, in coming years, U.S. companies are expected to expand capacity, and both European and Asia demand will likely be waiting to soak up the added supplies.

“Further out the curve, we expect the balance between production and LNG exports to drive U.S. gas price cycles,” the Goldman analysts said. “Specifically, we expect the next wave of U.S. LNG export capacity additions from 2025 to bring a renewed tightening to U..S gas markets after softer balances in 2023/24.”

Cash prices clunked on Tuesday. Despite frosty air lingering across the Great Lakes and Northeast, buyers stepped back amid the forecasts for mild weather later this week and into April.

Northeast prices plummeted and dragged down the national average. Algonquin Citygate, where prices are often volatile, dropped $7.200 day/day to average $5.525.

Still, there were notable double-digit drops across Appalachia and the Southeast as well.

While temperatures are expected to shift from chilly early this week in the Midwest and East to mild as April approaches, dampening demand, weather could still prove a wildcard.

AccuWeather noted Tuesday that a “potent storm is taking aim at the southern United States.” The storm is packing the potential to deliver “all facets of severe weather,” from hail to damaging wind gusts. This could temporarily threaten gas production and cause power outages.

If the expected storm materializes, it would follow a rash of severe thunderstorms and tornadoes that fueled a bump in cash prices last week, from Texas to the Southeast.

“Residents in portions of the South still reeling from last week’s bout of destructive weather may find themselves in the path of Mother Nature’s wrath once again this week,” said AccuWeather meteorologist Mary Gilbert.

The storm was expected to travel out of East Texas late Tuesday and onward toward the East. AccuWeather forecasters said it could potentially impact Alabama, Arkansas, Kentucky, Louisiana, Mississippi, Tennessee and parts of neighboring states on Wednesday.