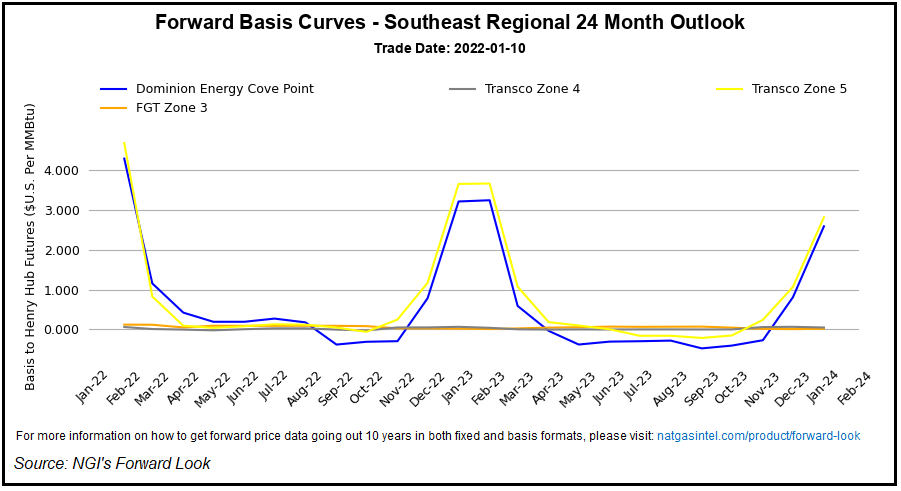 NGI’s Spot Gas National Avg., in contrast, dropped 87.0 cents on Tuesday to $5.035 as temperatures were expected to temporarily rise this week. Cash prices had climbed 33.5 cents on Monday.

U.S. forecasters said that, after seasonally mild conditions in the Midwest and East beginning Wednesday and extending through the trading week, temperatures were expected to dive lower again in the last 10 days of January to generate strong heating demand. Freezing temperatures could descend as low as Texas.

“It remains a forecast that carries above-normal demand as a whole rather easily,” Bespoke Weather Services said. “The pattern signals we see do support cold risks into the final third of the month…Once into February, this may change, as a more classic La Niña base state returns, but that is too far out to carry much confidence at this point in time.”

Weather “mostly remains king, and with the forecast still showing a colder-than-normal picture the next 15 days as a whole…it seems difficult to envision us dropping back below $4.00 in the near term,” Bespoke added.

The firm also noted that production hovered around 92-93 Bcf early this week following freeze-offs in multiple gas-producing basins early this year. That is down notably from the December highs around 96-97 Bcf.

EBW Analytics Group senior analyst Eli Rubin also is focused on output, noting Tuesday that he anticipates a recovery as weather becomes milder this week. However, “until production rebounds more fully or freezing weather forecast shifts reverse,” he added, “the near-term bias for natural gas remains to the upside.”

At the same time, LNG feed gas volumes are steadily holding above 12 Bcf this week. NGI estimated export levels topped 12.4 Bcf on Tuesday. A new train at Sabine Pass is ramping up, adding capacity to meet robust demand for U.S. LNG in Europe.

“Once Sabine Pass Train 6 is fully up and running, national demand could regularly approach 13.0 Bcf/d,” Rubin said. “Other LNG terminals have edged output higher amid cold temperatures and strong netback spreads to Europe.”

Energy Futures director Robert Yawger of Mizuho Securities USA LLC noted Tuesday that European natural gas inventory estimates were revised down by 2 percentage points to 51.63% of capacity, according to Gas Infrastructure Europe. “European storage is at its lowest level in more than a decade,” he said.

Extreme weather in 2021 depleted European supplies. Additionally, flows of gas to Europe from Russia’s new Nord Stream 2 (NS2) pipeline appear unlikely this winter. Amid political tensions between Russia and Ukraine, German regulators have yet to approve NS2. The U.S. Senate is also debating new sanctions against Russia and its NS2 that could come on top of sanctions imposed last year.

Against that supply backdrop and the ongoing winter season in Europe, demand for U.S. LNG is expected to prove exceptionally strong at least into March.

A combination of LNG momentum and solid domestic demand is also expected to result in meaningful pulls of natural gas from U.S. storage in January.

Even the lower of those two estimates would easily eclipse the year-earlier print of 153 Bcf and the five-year average pull of 144 Bcf.

Cash prices declined across nearly every region ahead of an expected break in winter weather this week.

Where demand has been strong, from the Midwest to the Northeast, prices declined Tuesday. Temperatures were expected to climb into the mid-30s and 40s from Chicago to Boston beginning Wednesday after recent bouts of freezing conditions.

Forecasts indicate that temperature extremes and national demand could ease Wednesday and Thursday before another round of winter arrives later in the week.

A storm is projected to heap snow and ice upon substantial stretches of the Plains and Midwest late this week and into the weekend before moving east. Forecasters at AccuWeather said the storm could progress to parts of the Southeast over the weekend, delivering snow as far south as Nashville.

“Cold air could make for a wintry mess for many, regardless of the intensity of the precipitation,” AccuWeather meteorologist Matt Benz said. He added that markets spanning from Arkansas and Georgia to the Carolinas to Virginia could be impacted.

He said it was too soon to predict whether the storm would move out to sea or shift north and move along the mid-Atlantic and New England coasts early next week.