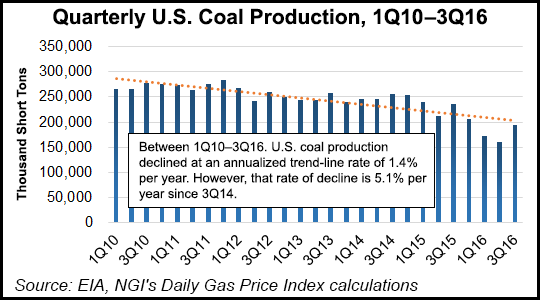 The executive order — which signals a marked shift in U.S. policy from combating climate change to achieving energy independence — also includes lifting a ban on federal leasing for coal production, and calls for returning regulatory powers to state and local governments. It will also review the “social cost of carbon” methodology for crafting regulation.

But the executive order does not affect the commitments the United States made at a climate change summit in Paris in December 2015.

“My administration is putting an end to the war on coal,” Trump said at a signing ceremony at the EPA’s headquarters in Washington, DC. “With today’s executive action, I am taking historic steps to lift the restrictions on American energy, to reverse government intrusion and to cancel job-killing regulations.”

Trump derided the CPP, saying “perhaps no single regulation threatens our miners, energy workers and companies more than this crushing attack on American industry.” He later added that he was shifting regulatory powers to states and localities because they “know what’s best for them.

“They understand it, they get it, [and] they’ve been doing it for a long time. It was taken away from them and not handled well. They are the ones who we should now, and will now, empower to decide.”

In a statement, Independent Petroleum Association of America CEO Barry Russell applauded Trump’s move, saying that U.S. carbon emissions are at their lowest level since 1992.

“This achievement would not have been possible without advancements in hydraulic fracturing and horizontal drilling; technologies pioneered by America’s independent oil and natural gas producers,” Russell said. “Rather than imposing duplicative regulations from Washington, this type of industry-driven, market-based approach is the solution to ensure robust, American energy development continues while we protect the air, water, and land we all cherish.”

Ken Cuccinelli, spokesman for the FreedomWorks Foundation and a former Republican gubernatorial candidate in Virginia, said the executive order “tackled one of the most egregious and illegal acts of President Barack Obama’s administrative state.

“The so-called ‘CPP’ would have coerced states to establish cap and trade programs, shuttered functioning power plants, reduced energy consumption, and forced the purchase of energy from more expensive and less reliable sources, all while intentionally driving up the cost of electricity — even for the poorest Americans.”

Texas Attorney General Ken Paxton said, “we’re heartened by the president’s latest action, which shows he’s serious about returning common sense and the rule of law to the EPA. And we look forward to the EPA returning to the cooperative approach with the states that the Clean Air Act and Clean Water Act expressly require as it reconsiders the unlawful CPP.”

The social cost of carbon metric, which is used to calculate the cost to society from one ton of carbon dioxide (CO2) being emitted into the atmosphere, was cited by the Trump transition team in its controversial questionnaire to employees and contractors working for the Department of Energy.

“The Trump administration’s decision to review the ‘social cost of carbon’ is a victory for anyone who favors sound rulemaking,” said American Energy Alliance President Thomas Pyle. “The social cost of carbon is an arbitrary and speculative metric that should never have been used to shape federal energy policy.”

But Pyle lamented the exclusion of Trump’s campaign promises to remove the U.S. from the Paris climate agreement and to review the Obama administration’s finding that CO2 emissions endanger the public’s health and welfare.

“Though more challenging, it is crucial that the Trump administration address these two important issues,” Pyle said. “Failure to do so could risk the remainder of President Trump’s attempts to rein in the regulatory state and undo the harmful climate policies of the previous administration.”

Environmental groups were opposed to the move.

“Today’s executive order, directing the EPA to begin rolling back environmental protections and policies including the CPP, is a misguided step away from a sustainable, carbon-free future for ourselves and generations to come,” former Vice President Al Gore said on Twitter. “It is essential, not only to our planet, but also to our economic future, that the United States continues to serve as a global leader in solving the climate crisis by transitioning to clean energy, a transition that will continue to gain speed due to the increasing competitiveness of solar and wind.”

Lindsey Allen, executive director Rainforest Action Network, said, “Trump’s order to lift the federal coal moratorium and to officially ignore climate change is not only willfully ignorant and dangerous, it is another windfall to his corporate cronies at the expense of low-income communities and communities of color.

“This president wants to return to the days of toxic dumping free-for-alls, black spewing smokestacks, and increasing rates of asthma for children in the most vulnerable neighborhoods across the country — all for the sake of corporate profits for his friends.”

Shannon Baker-Branstetter, policy counsel for Consumers Union, the policy and mobilization arm for Consumer Reports, said withdrawing the CPP would be a mistake that will cost consumers more in the long-term, in the form of higher bills for energy and health care.

“Zeroing out the social cost of carbon will also harm consumers,” Baker-Branstetter said. “This cost takes into account damages from climate change, including higher food prices, property damage, higher insurance premiums, and higher energy costs. When federal decisions ignore these costs to consumers, they shift the cost of pollution and climate change away from polluters and onto families and individuals.

“The reality is that states and energy markets are already moving in the direction of clean energy. Rather than slowing down this progress, the federal government should be encouraging states to boost renewables and energy efficiency to help lower utility bills for consumers, reduce pollution, and expand economic growth.”

Earlier this month, the Trump administration unveiled a proposed $1.15 trillion budget that included a call for the EPA to terminate climate change programs, including the CPP.

The CPP would have required that states develop and implement plans to ensure power plants in their state — either as single plants or as a collective group — achieve goals for reducing CO2 emissions between 2022 and 2029, and final CO2 emission performance rates by 2030. The CPP gave states the option of choosing between either an emissions standards plan or a state measures plan to reduce emissions. They also had the option of trading emissions rate credits with other states.