The Organization of the Petroleum Exporting Countries and its allied group of leading oil producers headed by Russia, aka OPEC-plus, on Sunday reached a deal to further boost production through the end of the year and into 2022. The member countries, led by Saudi Arabia, committed to bringing back all the crude supply they had collectively cut at the onset of the pandemic in 2020. 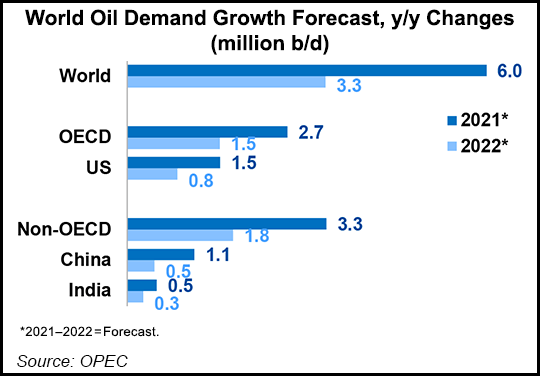 The OPEC-plus countries also agreed to extend their alliance through at least next year.

The deal includes a plan to raise output by about 400,000 b/d each month from August to December. This would come on top of adding more than 2 million b/d into the global market between May and the end of this month. In total, including previous increases, the cartel will have boosted output by about 4 million b/d by the end of July.

In a press release Sunday, OPEC cited “clear signs” of demand improvement “as the economic recovery continued in most parts of the world with the help of accelerating vaccination programs.”

The cartel slashed output by 9.7 million b/d early last year after the coronavirus curtailed demand. The new plan calls for continuing increases into 2022 until all the cuts made in 2020 are fully restored, though OPEC-plus will reassess in December before continuing the increases into next year.

The deal talks were initially tabled earlier this month after objections from OPEC member the United Arab Emirates (UAE), which said it had tabled a third of its output as part of the previous cartel production cuts and should get a green light to increase output more than other members to compensate. Saudi Arabia initially objected but agreed to broader increases of UAE’s, its own and other countries’ production baselines — the maximum amount of oil each country can produce.

“We believe that global oil demand will continue to recover, reaching pre-COVID-19 levels by the end of 2021, and continue to grow over the balance of the decade,” the BMO team said. “Growth in global oil supply may not keep pace with the growth in demand amid the growing cacophony for reduced investment in fossil fuels.”

Clearview Energy Partners LLC analysts, however, said it was important for the crude producers to reassess later this year for several reasons. The Delta variant of the coronavirus – and perhaps future variants — could interrupt demand. Demand tends to taper off in winter months, due to weather. And, ongoing discussions between the United States and Iran could result in eased economic sanctions on the latter, and Iran could add more than 1.0 million b/d of oil back into global supply before the end of 2021.

OPEC and its allies, however, said the increases agreed to Sunday are necessary to keep supply balanced with demand.

“Solid expectations exist for global economic growth in 2022. These include improved containment of COVID-19, particularly in emerging and developing countries, which are forecast to spur oil demand to reach pre-pandemic levels in 2022,” OPEC researchers said.

Production, at current levels, would fall short of demand by 1.5 million b/d in August, and widen further to 2.2 million b/d before the end of 2021, the researchers said.

Also at issue: U.S. production has only crawled ahead this year. Output rose by 100,000 bbl last week – following a 200,000 bbl increase the week before that, according to the U.S. Energy Information Administration. The 11.4 million b/d average for the July 9 week marked a 2021 high. However, output was still well below the early 2020 peak of 13.1 million b/d.

OPEC-plus scheduled its next meeting for Sept. 1.