TransCanada Corp. on Thursday set a target of 2019 for starting construction on its hotly contested Keystone XL oilsands export pipeline after selling most of the planned capacity to shippers that include the Alberta government. 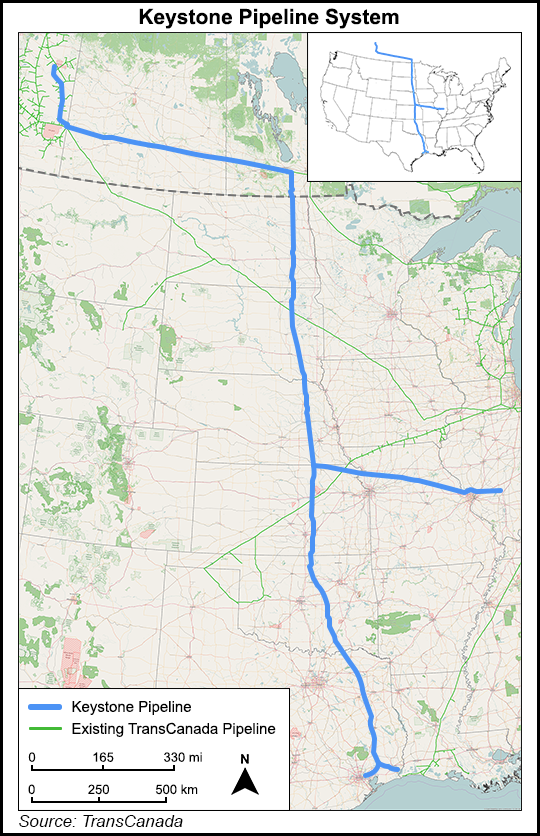 The province committed 50,000 b/d to the conduit into the United States from its royalty share of northern bitumen production — 10% of 500,000 b/d in 20-year transportation contracts secured by a six-week capacity auction.

TransCanada President Russ Girling singled out Alberta Premier Rachel Notley, who has been working to advance export projects. He said the provincial commitment was “instrumental to achieving the commercial support needed to proceed.”

Along with Alberta industry, the provincial government scores a double gain if the new pipeline is built. The project is a growth enabler for oilsands plants, considered the largest, fastest-growing Canadian natural gas consumer. Both natural gas and oilsands products generate royalties for the province as owner of most Alberta mineral rights.

Keystone XL is an ingredient in Canadian consensus projections of industry growth expressed by the National Energy Board’s current supply and demand forecast. Northern bitumen development slowed down but did not stop as a result of the 2014-15 oil price slump.

The force driving oilsands gas consumption is expected to be increasing use of low-cost underground or in-situ production with steam injections. The specialty’s fuel use is forecast to grow by 68% to 2.7 Bcf/d from 1.6 Bcf/d.

TransCanada stopped short of announcing a final decision on Keystone or any update for its four-year-old cost estimate of US$8 billion. The favorable shipping capacity auction results were described as “positioning the proposed project to proceed” by advancing it into a “construction preparation” stage.

The project schedule calls for 2018 to be dedicated to securing regulatory permits, while also seeking additional shipper commitments to top up use of all the planned capacity for 830,000 b/d.

The long battle for public acceptance of Keystone likewise remains far from over, as TransCanada negotiates with landowners along the project’s 1,897-kilometer (1,179-mile) route. A November ruling by the Nebraska Public Service Commission completed the required U.S. federal and state regulatory approvals, but not all property owners in the pipeline’s path have been appeased.

TransCanada said it is “continuing outreach in the communities where the pipeline will be constructed and is working collaboratively with landowners in an open and transparent way to obtain the necessary easements for the approved route.”

While environmental and native groups have repeatedly vowed to stop the pipeline again after temporarily succeeding under the Obama administration, TransCanada observed that the project also has political friends in high places in the United States.

Girling thanked President Trump and the administration “for their continued support and appreciate the ongoing efforts of Nebraska Gov. Pete Ricketts, the Nebraska legislative and congressional delegation, Omaha Federation of Labor, Nebraska State AFL-CIO, our customers and various stakeholders to advance this project.”

An environmental coalition behind the Promise to Protect project, which is seeking to prevent Keystone from moving forward, said it had received commitments from nearly 14,000 people “to join peaceful resistance” along Keystone’s route when needed. Opponents to Keystone responded Thursday afternoon to TransCanada’s announcement.

Alberta leaders are “grasping at straws to keep TransCanada’s pipeline afloat, but finding investors is only one of many hurdles for Keystone XL,” said 350.org Executive Director May Boeve. “This pipeline still faces several legal challenges, from a federal lawsuit to an appeal in Nebraska.”