With moves to back away from coal-fired generation and the pending acquisition of Chicago-based Integrys (see Daily GPI, June 23), Wisconsin Energy’s (WE) CEO outlined a number of natural gas advances for the Milwaukee-based combination utility holding company. 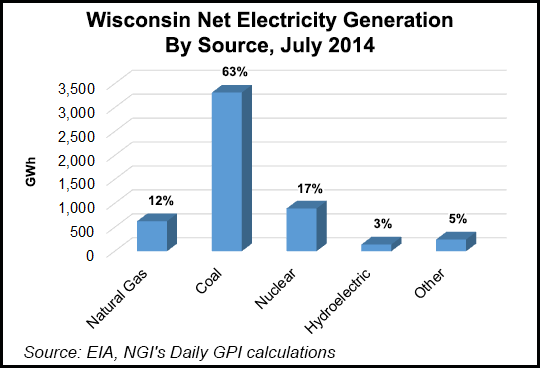 While touting conversions of old coal-fired plants to run on gas, CEO Gale Klappa said that in the third quarter WE saw a 20% growth in new gas utility connections and a 13% overall increase in retail gas sales for the quarter, compared to the same period in 2013. Klappa made the remarks on a recent 3Q2014 earnings conference call, reporting decreased earnings because of cooler-than-normal weather in the Upper Midwest this summer.

With the closing of the Integrys acquisition, which is slated for completion in the second half of next year, Klappa said the newly combined company will boast the eighth largest natural gas distribution company in the nation. The overall new combination utility will serve more than four million customers in four states — Wisconsin, Illinois, Michigan and Minnesota.

Shareholder votes on the pending merger will be held by both companies on Nov. 21, and state regulatory applications have been made to the four state commissions as has an application to the Federal Energy Regulatory Commission.

Klappa mentioned about $300 million of natural gas related projects that WE has under way unrelated to the upcoming acquisition of Integrys: two pipelines and a power plant conversion.

The major source of electricity for Milwaukee is an old, 280 MW coal-fired plant now being converted to run as a combined-cycle baseload plant using natural gas. The Valley Power Plant along the Menomonee River in Milwaukee was built in 1968.

Started earlier this year, the conversion will cost $70 million, keeping the 280 MW capacity and the plant’s ability to provide steam as well as electricity and voltage support to downtown Milwaukee.

Klappa noted that a $30 million pipeline project is also under way to fuel the new gas-fired plant when it is ready to operate later this year. On a longer time frame, in central Wisconsin work is ongoing to build a $175-180 million, 85-mile gas pipeline lateral between Eau Claire County and the city of Tomah in Monroe County that will be operable in the fourth quarter next year.

“The West Central lateral is needed to provide additional natural gas supply to ensure reliability in the future and to meet growing customer demand,” said Klappa, adding that there is an increasing amount of switching in that area of the state from propane to natural gas.

Klappa has been touting more of the natural gas business since the acquisition announcement and on the previous earnings conference call (see Daily GPI, Aug. 1).