For natural gas bulls there is both good news and bad news contained in March bidweek trading. The bad news, of course, is that prices fell, if not collapsed, as an already mild 2016-2017 winter appears to be wrapping up early. Outdoing February bidweek’s 85-cent drubbing, NGI’s March National Bidweek Average recorded a $1.03 decline to arrive at $2.43. 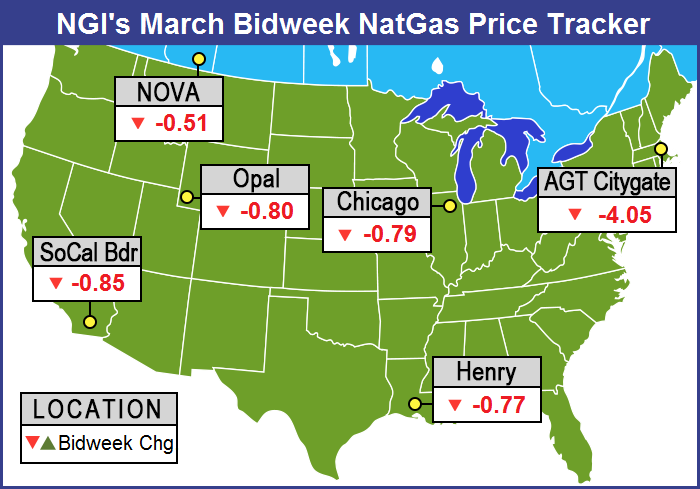 Greatest declines were seen in the Northeast, the region hardest hit by the winter that wasn’t. The Algonquin Citygate recorded the largest drop for the month by falling $4.05 to average $3.28, and Transco Zone 6 New York plunged $2.65 to $2.40.

South Texas recorded the smallest decline, which was still considered significant, giving up 72 cents to average $2.54.

March futures expired last Friday at $2.627, down a stout 76.4 cents from the settlement of the February contract.

Much, if not most of the price decline, is weather-driven, and some traders found themselves passing on bidweek purchases as the need to balance March storage drew attention.

“My bidweek volumes were all down,” a Chicago-area marketer told NGI. “I attribute it to storage that basically has to come out. My customers have decided to pull on that instead of buy baseload gas.”

It’s all about the weather, and “this year has been lacking thereof,” he said.

A Nebraska utility source echoed the experience of the Chicago marketer.

“We are still long storage so we are selling off existing baseload that we had previously contracted for. We always do longer term RFPs and some of our supply contracts go for 12 or 24 months, and some are November-March or December-February,” he added. “We had some pre-purchases from March that we sold back so we could pull more from storage.

“We were able to sell back at Index. We are almost like a producer, hoping for some load.”

Bidweek traders had to look no further than February heating load to explain slumping Midwest bidweek quotes. According to Accuweather.com, Chicago heating degree days (HDD) were far below normal.

The average temperature in February for Chicago was 39.7 degrees, a whopping 10.9 degrees above average. As a result Chicago, tallied a miserly 701 HDDs, or lightyears less than its normal 1,013 for February.

During the early going, bidweek traders had to deal with a 89 Bcf storage withdrawal report last Thursday (Feb. 23) that by all accounts was bullish relative to expectations, but failed to cause much of a market stir.

The Energy Information Administration (EIA) storage report for the week ended Feb. 17 made its typical grand entrance at 10:30 a.m. EST, and although prices staged a modest rally, they failed to breach previous highs and lows already established. At the close last Thursday (Feb. 23), March had added 2.5 cents to $2.617, and April had gained 4.8 cents to $2.749.

The storage figures were something of a surprise, as the withdrawal was greater than what the market was expecting. The 89 Bcf withdrawal was about 4 Bcf above industry estimates. March futures rose to $2.662, and by 10:45 a.m. March was trading at $2.651, up 5.9 cents from Wednesday’s settlement. March had established the session low in overnight trading at $2.569, and the session high at $2.704 before the release of the data.

“We were hearing an 88 Bcf withdrawal, but the action after the number came out was pretty uneventful,” a New York floor trader told NGI. “Things are so depressed in this market.” The week before, “we were talking $3 holding, then $2.75, and now $2.50, and in the midst of winter.”

“The 89 Bcf figure was more than the consensus expectation for 81-85 Bcf in net withdrawals, and so supportive for prices,” said Tim Evans of Citi Futures Perspective. “At the same time, the draw was still well below the 158 Bcf five-year average, and so bearish on a seasonally adjusted basis, limiting the potential for price recovery.”

Inventories now stand at 2,356 Bcf and are 261 Bcf less than last year and 156 Bcf greater than the five-year average. In the East Region, 48 Bcf was withdrawn and the Midwest Region saw inventories decrease by 30 Bcf. Stocks in the Mountain Region fell 4 Bcf, and the Pacific Region was up 1 Bcf. The South Central Region dropped 8 Bcf.

Last year 131 Bcf was withdrawn during the same week, and the five-year pace is for a 158 Bcf pull.

“Through the first seven weeks of the year we’ve seen a cumulative withdrawal of 955 Bcf, well below last year’s 1,054 Bcf aggregate pull and the five-year average of 1,146 Bcf. Absolute storage levels are now 164 Bcf above the five-year average, as the smaller than normal cumulative withdrawal so far this year has more than erased the deficit created by a strong December.”

BMO Capital Markets analyst Randy Ollenberger said, “We believe the storage report will be viewed as slightly positive. Storage has dropped close to five-year average levels, and we believe that U.S. working gas in storage could trend toward five-year lows by the end of the 2017 summer injection season, assuming normal weather.”

As bidweek drew to a close Tuesday, firming spot prices at major market centers were able to counter eastern weakness.

Near-term temperature outlooks called for significant swings, and the NGI National Spot Gas Average gained 3 cents to $2.39 on Tuesday for Wednesday delivery. Futures managed a healthy rally, primarily on technical considerations, and at the close April had added 8.1 cents to $2.774 and May was up 9.1 cents to $2.870.

Major market centers showed small gains as temperature forecasts proved volatile. AccuWeather.com forecast that Tuesday’s high of 58 in New York City would jump to 70 Wednesday and drop to 48 Thursday, 17 degrees above normal. Chicago’s 60 high Tuesday was predicted to drop to 50 Wednesday and slide to 39 Wednesday, 1 degree below normal.

Gas traded Tuesday for Wednesday delivery at the Chicago Citygate rose 2 cents to $2.60, and packages at the Henry Hub were quoted at $2.51, up 7 cents. Gas on Northern Natural Demarcation added a nickel to $2.47, and deliveries to Opal gained 9 cents to $2.40. Gas at the SoCal Citygates changed hands 12 cents lower at $2.78.

“The natural gas market is seeing what looks like a technical recovery after nearby April futures held above their $2.641 low trade from last week, but the temperature forecast looks warmer and less supportive than a day ago,” said Citi Futures Perspective’s Evans. “Thursday’s DOE storage report for the week ended Feb. 24 also looks weak, with the early consensus running at just 3-5 Bcf in net withdrawals, a token draw far smaller than the 132 Bcf five-year average for the date.”

Weather models continued to moderate and heating requirements are expected to be below normal. Tuesday’s “six- to 10-day period forecast is colder across the coastal East early, followed by large warmer adjustments during the second half of the period over the eastern two-thirds,” said WSI Corp. in its Tuesday morning report to clients. Continental U.S. gas-weighted HDDs “are down 11.9 to 79.5 for the period.

“Forecast confidence is considered average,” WSI said. “Models show fair agreement with the large-scale pattern, though there is some uncertainty with how much temperatures cool off late in the period over the East.”

The National Weather Service (NWS) continues to forecast well below normal heating load. For the week ending March 4, NWS predicted that New England would endure 177 HDD, or 56 fewer than normal, and the Mid-Atlantic states of New York, New Jersey and Pennsylvania are expected to have 169 HDDs, or 50 fewer than average. The greater Midwest from Ohio to Wisconsin is expected to see 180 HDDs, or 53 short of its normal seasonal tally.

Analysts see the market slipping lower and eventually resting at $2.50. “We see the April futures ratcheting even lower to the pre-expiration March lows of $2.52 within a one-week time frame where we will anticipate longer-term support,” said Jim Ritterbusch of Ritterbusch and Associates. “While the warm weather factor has been a definite bearish influence across this month of February, above normal temperature trends will begin to lose influence as the winter season winds down next month.

“Non-weather items such as power demand, import/export activity, production, nuke downtime, etc., will gradually be developing in the process of likely driving a base of support through the shoulder period,” he added. “We feel that this support will be developing at around the $2.50 area across much of next month.

“However, the possibility of a significant price spike of much more than 20 cents is being sharply reduced as the storage surplus continues to increase in very large weekly chunks. As the surplus increases, the 2017 carrying charges will remain vulnerable to expansion into new wide territory with such a development encouraging additional production given the benefits of huge price premiums out to next winter with which to establish short hedges.”