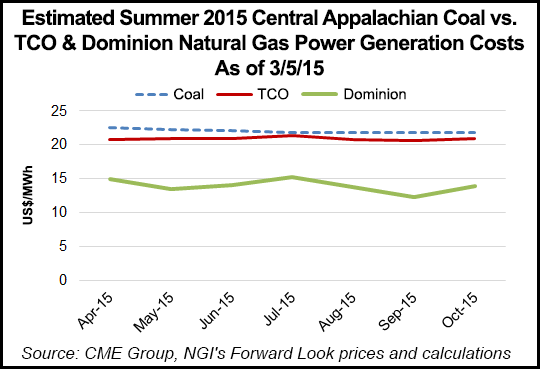 The Nymex April gas futures contract jumped 14.3 cents between Monday March 2 and Thursday March 5 amid ongoing frigid conditions in the Northeast and a larger-than-expected withdrawal from storage. The April contract settled at $2.841/MMBtu Thursday.

But forwards basis prices brushed off the Nymex strength as longer-term weather outlooks called for a warming trend, not only over the West and central U.S., but also over the Midwest and Northeast beginning early in the week, with temperatures moving well above the freezing levels now being experienced.

Forecasters with NatGasWeather warned, however, that a weather system tracking across southern Canada during the middle of the week would provide a glancing blow of sub-freezing temperatures late Thursday into Friday over the Great Lakes and Northeast. There are still details that need to be resolved with this system, though, that would indicate just how much heating demand is required for these high-population regions.

“After this systems sweeps through, the weather data really begins struggling on whether additional cold blasts will follow into the northern U.S., and also how successful Pacific weather systems will be crashing into the West Coast,” NatGasWeather said. “It appears there will be a little bit of both, and this will likely lead to fairly seasonal temperatures over much of the U.S. That’s not to say there won’t be areas of cooler- or warmer-than-normal temperatures, but right now, the data is inconclusive on exactly what will set up over high natgas demand regions of the eastern U.S.”

At the Algonquin Gas Transmission citygates, April basis jumped 14.9 cents between Monday and Thursday to reach plus 81 cents/MMBtu, according to NGI’s Forward Look. At the same time, cash prices at the volatile market hub jumped about $2.

“Don’t worry. It will come off,” a Northeast trader said. “The Gulf was much weaker today. Give it a few days.”

The low prices are expected to attract power generators this summer, analysts have said, which could then provide some support to these markets.

Over in the West, it appears that fundamentals may be beginning to work their way into the markets as California points posted gains, albeit modest, against the rest of the region’s overall weakness.

Southern California Border tacked on 2.2 cents for April to hit minus 13.2 cents/MMBtu, while May and the balance of summer also were up about 2 cents.

“Snowpack continues to significantly lag, which is bullish for gas in the May-June period,” said Genscape’s Rick Margolin, senior natural gas analyst. “However, the Pacific Northwest and Northern California have actually been getting a decent amount of moisture lately this winter. Temperatures haven’t been cold enough to convert that to snowpack, but the precipitation has been able to boost present hydro generation numbers. So that’s something interesting to watch in terms of being a bearish influence on current gas demand.”