Not even a larger-than-expected withdrawal from storage was enough to soften the blow of a more than 20-cent drop in March natural gas forwards prices as the main focus remains on weather, or the lack thereof. 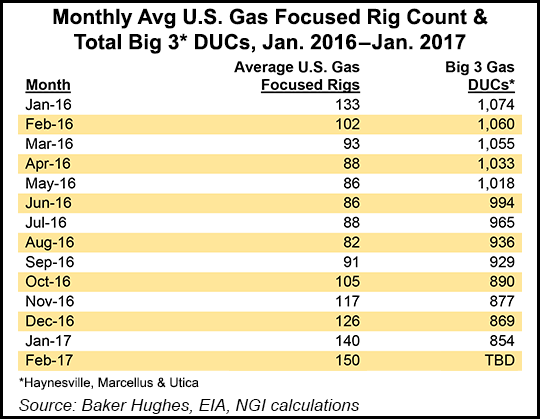 March forward prices plunged an average of 26 cents from Feb. 17 to 23, while April tumbled an average of 22 cents, the summer 2017 dropped an average 20 cents and the winter 2017-2018 strip fell an average 18 cents, according to NGI Forward Look. Smaller losses were seen further out the forward curve.

The steep declines occurred as temperatures remained unseasonably mild across most of the country last week, with daytime temperatures running in the 70s and 80s over the southern United States and in the 60s to 70s over major East Coast cities. The mild weather is nothing new as much of this winter, save for December, has been exceptionally mild.

In fact, heating degree days [HDD] through Feb. 16 show this winter to be the warmest in more than 10 years, with the two warmest winters of the past decade taking place over the past two years, according to investment bank Jefferies. Total HDDs are about 11% below the five-year average, but February has been especially warm, with aggregate HDDs over the last three weeks at the lowest February levels seen in at least 10 years, the New York-based bank said.

“To put this into perspective, February residential/commercial demand of 36.2 Bcf/d is less than 4 Bcf/d above average March res/comm demand,” Jefferies said.

Meanwhile, back in November-December, HDDs were just 2% below the five-year average and were up 13% year over year (versus the warm winter of 2015-2016). And now, the weather gods appear to be offering a slight glimmer of hope that we could see a return to December-like conditions.

“Model guidance still is a bit divided on this, with American guidance continuing to show the most cold risk that could actually allow prices to rally back up near the $3 level if it were to verify, while other guidance is still not as impressed by the cold, which could explain why prices are not rallying as much today,” Bespoke Weather Services said Friday morning.

Indeed, much of Friday’s action was sideways for the Nymex March futures contract, which ended up expiring on Friday at $2.627.

Operational guidance from the Global Forecasting System only shows demand getting above average in the 11-15 day time period, but it shows the potential for rather signiﬁcant deviations, Bespoke said. The GFS ensembles agree, showing impressive cold in the long range, the likes of which have not been on model guidance in weeks. Canadian weather ensembles remain far less impressed, but the European ensembles are showing decently more long-range cold risk as well. And climate guidance from the National Oceanic and Atmospheric Administration shows cold possible through the second half of March that could stabilize and rally natural gas prices, the New York-based weather forecaster said.

“If we can begin to get more sustained cold into mid-March, then we could ﬁnally recover some of the heating demand that has been missing all winter,” Bespoke said.

The forecasting team at NatGasWeather said frigid arctic air over Canada has shown better potential in pushing a little more aggressively into the U.S. in early March instead of just providing glancing blows, although with major weather model differences showing up from one suite of weather data to the next. What happens after March 8 is going to be scrutinized closely by the markets over the weekend break as there’s still expected to be frigid air over Canada that could continue to impact the northern and eastern U.S., the forecaster said.

“If it were able to do so, it would likely be seen as bullish and cause end-of-winter supply estimates to trend back lower after rapidly increasing the past few weeks,” NatGasWeather said.

Indeed, storage inventories are sitting much fuller than most had expected when the winter began. The U.S. Energy Information Administration on Thursday reported a 89 Bcf withdrawal for the week ending Feb. 17, higher than expectations but well below prior-year and five-year averages. Stocks were 261 Bcf less than last year at this time and 156 Bcf above the five-year average of 2,200 Bcf.

“While the year-over-year comparison isn’t outright bearish, the fact that the deficit has fallen by almost 200 Bcf since the beginning of the year has raised concerns for market bulls,” analysts at Mobius Risk Group said.

Adding to the bearishness is the fact that salt domes were injecting during the Feb. 18-19 weekend; sample activity indicates that over 1 Bcf was counter-seasonally stored from Saturday-Tuesday. At 332 Bcf, salt dome inventory is almost 40 Bcf higher than the same time last year and 115 Bcf ahead of the five-year average, the Houston-based company said on Tuesday.

And market chatter continues that this week’s storage report for the week ending Feb. 24 could bring about the first-ever February injection. “This is unprecedented. We’ve never seen winter over this early, but an injection [this] week will definitely kill it,” a Northeast trader said.

Still, all hope is not lost that storage inventories will end the winter season in better shape than last year. “Storage is now almost certain to end the winter above average levels, but even a warm March should leave storage at least ~200 Bcf below last year’s level,” Jefferies said. “Natural gas storage withdrawals continue to track ahead of prior years’ levels on a temperature-adjusted basis, but the very warm temps this winter have pushed storage to about 150 Bcf (about 7%) above the five-year average.”

Meanwhile, the last gasp of cold weather expected to arrive in March, combined with the fact that the April contract is extremely oversold right now, might combine for a bit of a rally, but probably nothing too sustainable, said NGI’s Patrick Rau, director of strategy and research.

Instead, the focus in the months ahead will be on production figures and coal prices to see just how much gas may be in storage heading into the 2017-2018 winter season. “Certainly, any coal-to-gas switching would help keep the storage balance in relative check headed into next November, which is all the more important, considering the swath of new gas production that will likely come on line right around the same time,” Rau said.

In the Northeast, Phase I of Rover to Defiance, OH, is expected to be online in July, and on into Michigan and Dawn in November. Assuming that doesn’t take long to fill, and that it isn’t filled by production that is currently flowing through other pipelines, that is 3.25 Bcf/d of incremental production right there. Permian drilling continues to increase, and several companies are predicting Eagle Ford production should start growing again in the second half of 2017. That means more associated gas production.

All in all, the gas-focused rig count in the U.S. has nearly doubled since its recent cyclical low, rising from 81 rigs on Aug. 26to 151 on Feb. 24. Since it usually takes six to nine months to bring new production online, that incremental production shouldn’t start to show up until the February through April 2017 time frame, Rau said.

“The about 3.0 Bcf/d of new pipeline export capacity to Mexico coming online in 1Q17, along with the expected startup of Sabine Pass’ third liquefaction train in 2Q17, which would create another about 0.6 Bcf/d of potential demand, will likely help absorb some of this excess production. But ultimately, I think coal-to-gas switching is going to have to step up to keep gas inventories from being overly bloated going into next November,” Rau said.

The Northeast trader, meanwhile, offered a more optimistic outlook as he projects end-of-summer storage inventories to sit between 3.6-3.75 Bcf, the lowest level in five years, as more meaningful production gains likely won’t hit the market until the end of the year.

Northeast markets, however, posted more substantial declines at the front of the curve as cash markets slid considerably this week. New England locations were hit especially hard, with the Algonquin Gas Transmission Citygates seeing March forward prices plunge 54 cents from Feb. 17 to 23 to reach $3.10, according to Forward Look. Cash, meanwhile, started the week off at $3.06 for Monday’s gas day but fell to $2.11 by Friday’s gas day.

“Cash prices touched on some levels this week that brought on some additional power burn, so I think there’s a floor nearby,” the trader said.