Natural gas well freeze-offs had begun to impact production Thursday in the Rockies and San Juan Basin, and more freeze-offs, combined with icy roads that would hinder transport, were expected to affect Permian and Anadarko basins by Friday as Winter Storm Cleon continued its rampage across the country. 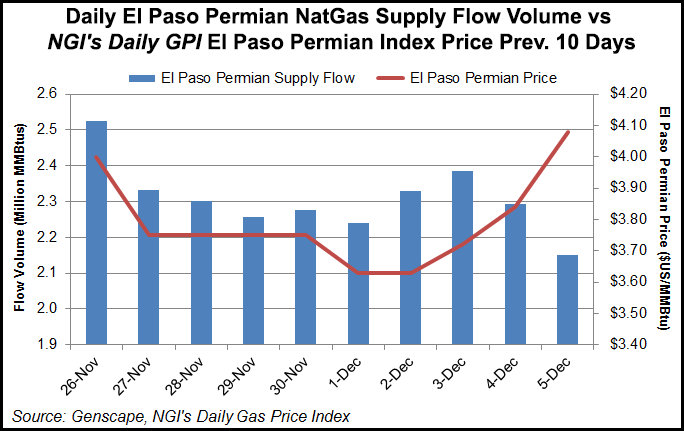 The storm could stretch more than 1,000 miles from the Great Plains into Texas and east into the Ohio River Valley, causing an “overwhelming” amount of power outages, said The Weather Channel’s storm tracker Jim Cantore. Those power outages could cause more problems for operators in the gas patch if pipeline compressors that run on electricity are out; some are equipped with backup generators.

As of Thursday morning, an estimated 0.5 Bcf/d of production in the Rockies and San Juan Basin had been affected by freeze-offs, said Genscape Inc. analyst Wei Chien. Gas production in the Rockies had dropped by 0.2 Bcf/d on Wednesday, she said. “Rockies demand increased by 0.8 Bcf/d in the past four days with the new cold front. Demand increase will spread eastward as the cold weather starts affecting other regions.”

Genscape analyst Rick Margolin told NGI that “market participants are also speculating freeze offs will hit West Texas/Permian and stretch up into the Anadarko [basin] with temps in those regions falling to 10-15 degrees below average for this time of year…Daytime highs are forecast to remain sub-freezing through the weekend.”

Laredo Petroleum Holdings Inc., one of the biggest Permian operators, said late Thursday the effects of last week’s winter weather had impacted operations and the new severe weather continued to cause a material impact.

“The extent and duration of weather-related issues will result in total production below the company’s anticipated guidance range for the fourth quarter of 2013,” Laredo management said. Operations were “impacted by widespread power outages, reduced access to production and drilling facilities, curtailed trucking services, as well as drilling and completion delays.

“Currently, drilling and completion activities have resumed but pervasive power outages continue to affect a substantial portion of the company’s wells. More than 50% of Laredo’s wells remain shut-in and the production of many operating wells has been curtailed due to facilities constraints. Once power is restored, it is anticipated that there will be no impact on the performance of these wells.”

Like Permian operators Pioneer Natural Resources Co. and Energen Corp., Laredo said assessing the storm’s impact “could take several weeks,” (see Shale Daily,Dec. 2). Laredo’s operations “are in rural, less populated areas that offer operational advantages, but are among the last to have electrical service restored. Once operations return to normal and the full impact of weather-related downtime can be quantified, the company will update its fourth quarter 2013 guidance ranges.”

At El Paso Permian in West Texas, the decreased pipeline flows have had a strong response in the price of gas with NGI’s Daily GPI El Paso Permian Index rocketing 45 cents over the past four days. That is quite a change for a producing region, where prices tend to be less volatile than consumption areas like the Northeast, where winter prices are often a roller-coaster ride.

The storm may not be as treacherous to East Coast operations, but the impending cold weather and anticipated high demand led Algonquin Gas Transmission (AGT), which runs through the Northeast and supplies gas to New England, to require all shippers and point operators to carefully review demands for gas and schedule gas consistent with daily needs and to tender and receive gas consistent with confirmed nominations until further notice.

For energy operators, the storm likely will impact operations from the Bakken Shale through the Permian Basin and Barnett Shale of Texas. However, Wyoming operators are more prepared this year than they have been in the past, Petroleum Association of Wyoming President Bruce Hinchey told NGI.

“Wyoming oil and gas operators are accustomed to our winters that can be at times severe,” he said. “Wells and equipment, when needed, may be insulated or even have heated lines to keep from freezing. Road are plowed to open access to production sites routinely. I have not heard of this causing any equipment to be shut in. In some extreme cases, wells may be shut in for a short period but that should not affect overall production.”

An ice storm warning in Texas was in place until 6 p.m. Friday in the southeastern and south-central parts of the state, where up to three-quarters of an inch of ice was possible. Gov. Rick Perry activated the Texas National Guard, which deployed equipment and emergency resources to North Texas. Across all of the Plains states, as well as all of the counties in Oklahoma, storm warnings or advisories were in effect.

The Arctic storm, which began to blow into the United States on Thursday, already had dumped record amounts of snow throughout the West and Northern Plains.

In North Dakota on Thursday morning, 10 inches of snow was reported in Rhame, with nine inches near Carrington and eight inches at Buffalo, near Fargo. Wyoming already had 30 inches of snow Thursday at the Blind Bull Summit and 26 inches at the Kendall Ranger Station, both in the western part of the state. Eighteen inches of snow had accumulated in Utah’s Deer Valley.

In Colorado, 30 inches of snow had fallen in the northwestern part of the state at Douglas Pass along Highway 139, and 25 inches had accumulated in west-central Colorado near Gothic. Santa Fe, NM, reported five inches of snow.

A spat of warm weather in the Northeast, where in the Appalachian region temperatures have reached above 50 degrees for much of this week, had operators relaxed compared to their counterparts to the West and Southwest. Some executives attending the Ohio Oil and Gas Association’s Oilfield Expo and Safety Conference in Cleveland said they know a thing or two about freeze-offs, adding that they aren’t typically concerned about winter weather affecting their operations.

One executive, who runs a small exploration and production company in Ohio, said equipment used in the region is better rated to handle cold weather and any freeze-offs that might occur in a dry gas well, for instance, have no effect on production guidance because operators have already factored cold weather into the mix, he said. Temperatures in the Northeast are expected to drop into the mid-30s heading into the weekend.

“I don’t think winter weather has a fundamental impact on these guys up here. This is very sophisticated equipment and these are very sophisticated techniques,” said Ohio Oil and Gas Association Executive Vice President Thomas Stewart.

The National Weather Service has predicted an equal chance for precipitation at above, near or below averages in the Northeast this winter, while temperatures are expected to be in line with the norm at this time of year. The winter storm last week dumped up to 10 inches of snow on parts of western Pennsylvania and eastern Ohio, where drillers are active in the basin, but it did little to operations there, Stewart said.

The main challenge remains moving dry gas through pipelines at this time of year, he added. “Moving gas in cold weather always has its challenges, but we’re still prepared for it,” Stewart said. “When demand picks up, that’s an issue because it changes the hydraulics of the pipeline system. All you can really do is keep an eye on it.”