Between structural shifts in supply/demand balance and historically lean stockpiles, natural gas prices face major upside risks this winter, but even after recent gains, Henry Hub bulls should have room to run before U.S. liquefied natural gas (LNG) exports start to become uneconomic, according to analysts. 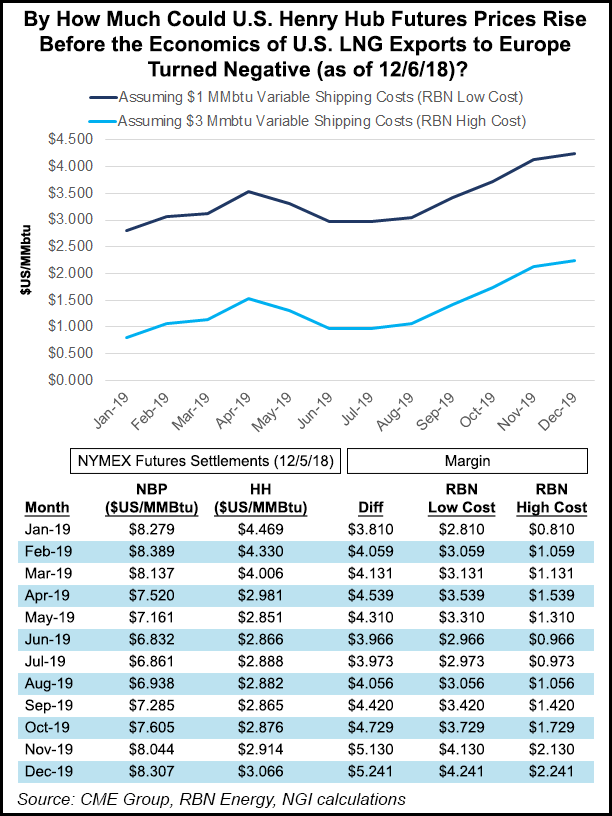 Focusing only on the economics of Gulf Coast LNG exports to Europe, RBN Energy LLC analyst Amber McCullagh estimated that it would take Henry Hub prices rising from $5.50-7.50/MMBtu before impacting demand on cargoes leaving the United States.

This estimate, based on recent UK National Balancing Point (NBP) futures averaging $8.50/MMBtu for January to March, factored in a number of variable costs for potential LNG offtakers, including liquefaction, shipping capacity and regasification (regas). Ultimately, McCullagh concluded that the variable costs to get U.S. gas to Europe could range from a low of about $1/MMBtu to upwards of $3/MMBtu.

“This is a wide range, and we think different offtakers will respond differently, meaning that LNG exports would decline gradually within this range,” the analyst said.

The recent structure of the forward curve “incentivizes generators to burn whatever coal they have available in stockpiles now (rather than bid up power prices to draw in additional gas-fired generation this winter and preserve coal stockpiles) because there will be more gas available later,” McCullagh said. “And while we certainly agree with the premise of strong gas supply growth again in 2019, there’s a distinct possibility that there won’t be enough coal supply…to keep gas prices in the $4-5/MMBtu range if weather turns very cold for a sustained period.”

That leaves reduced LNG exports — along with higher oil usage in the power stack — as among the remaining levers to try to balance the market in the event of further natural gas prices spikes.

Setting aside Cheniere Energy Inc.’s Sabine Pass Train 5 and Corpus Christi Train 1 currently in commissioning, and setting aside Dominion Energy Inc.’s Cove Point terminal, which has lower relative feedgas volumes and different economics because of proximity to the premium pricing at Transco Zone 5, McCullagh estimated liquefaction costs at Sabine Pass Trains 1-4 to be 15% of Henry Hub. Shipping costs could vary greatly, depending on the offtaker.

“At current LNG charter rates of $170,000 and 15 days of shipping from the Gulf Coast to Europe (30 including the return voyage), for some offtakers, variable shipping costs could run as high as $1.65/MMBtu,” McCullagh said. “…For offtakers with ships and crews under contract, and the ability to use the ship elsewhere without a return voyage, the figure is likely much lower, potentially as low as just the boil-off rate.”

As for the variable regas costs, “the main difference is between offtakers who have contracted regas capacity (whether in their home market or elsewhere) and those who don’t. Roughly speaking, regas reservation charges” for those without contracted capacity could run in the neighborhood of 50 cents/MMBtu, whereas variable costs for offtakers who have regas capacity will be minimal — only a few cents.”

As of Friday, Nymex Henry Hub futures were averaging around $4.340 for the January, February and March contracts as a mild pattern was expected to push down national heating demand through mid-December. While recent prices are still well shy of the estimated $5.50-7.50 range that would start to stimulate a demand response from U.S. LNG exports, it’s only December, and recent volatility points to a market on edge.

“Henry Hub prices still have some room to run before shipping LNG from Sabine Pass to Europe becomes uneconomic,” said NGI’s Patrick Rau, director of Strategy & Research. “Simply using the current futures strip for both Henry Hub and NBP, and factoring in RBN Energy’s variable shipping cost assumptions, January Henry Hub futures would have to rise another 80 cents/MMbtu or so to see a demand response from some shippers. For others that already have shipping and regas capacity in place, that figure is more like $2.80/MMbtu.

“But that calculation is constantly in flux, of course, since the price of gas at the Henry Hub and in Europe can change on a dime, especially during the winter, as can variable shipping costs,” Rau noted. “The dayrates for spot market vessels in the West have been creeping lower in recent weeks, but are still roughly $140,000/day.” Meanwhile, “Asian LNG prices also have trended lower the last several weeks, which combined with higher Henry Hub prices, have reduced the economics of shipping gas from Sabine Pass to the Far East.”

In a recent webinar outlining the firm’s price outlook for the remainder of the 2018/19 winter, EBW Analytics Group CEO Andy Weissman described a delicate balancing act for natural gas in the months ahead where small shifts in weather-driven demand could produce dramatic price impacts.

“The potential range of price outcomes this winter is extreme,” he said.

Given the well-documented surge in production growth, EBW’s “most likely” scenario (an estimated 45% probability) based on forecasts from affiliate Weather Decision Technologies (WDT) points to a “significant chance” that current storage deficits, “which look quite massive, will shrink fairly dramatically. And if that happens, I think we could see a lot more moderate prices as the winter progresses.”

Under this most likely scenario, the Energy Information Administration’s (EIA) reported storage inventories should exit the season at roughly 1,100 Bcf, and average Henry Hub prices in March will end up well below where March Nymex futures have traded in recent weeks, he said.

On a weather-normalized basis, the market has become “vastly oversupplied,” driven by rapid supply growth from unconventional output.

However, it all depends on weather, and the current historically low stockpiles coincide with a market that has grown more weather-sensitive. Greater reliance on gas-fired generation has made natural gas demand more sensitive to temperature swings and left electric markets less able to lean on gas-to-coal switching during periods of high prices, adding to upside risk, according to Weissman.

If that weren’t enough, there’s been a greater frequency of extreme weather events.

“The oceans have become hotter. That has changed the jetstream,” Weissman said. North America is more prone to extended warm periods, but it also occasionally creates “conditions like we had in the bomb cyclone and polar vortex, where the movement of the jetstream creates a blocking condition in Alaska or the Pacific Northwest, and that opens up a channel that allows cold air from Canada to pour deeply into the U.S.”

Even a 50 degree day increase (roughly 100 Bcf) in the winter demand outlook could cut the market’s inventory cushion by one-third, according to Weissman, who estimated that end-season stockpiles can only drop to around 800-850 Bcf before creating some “truly extreme conditions.”

“I think the market will do whatever it needs to do to keep storage from going below that level,” he said. While it’s not necessarily likely, “the possibility of storage going somewhere below 800 Bcf is really something that can’t be tolerated.”

“All it takes is another 300 Bcf of demand” versus the current most likely scenario to put the market in a “danger zone” where “it would not be surprising at all if Henry Hub spiked above $10,” he said.

“There’s clearly a significant risk — at least in the range of 30% — of significantly colder scenarios that would result in significantly higher space heating demand,” Weissman said. Depending on the extent of the cold temperatures “there’s a very high likelihood in that kind of scenario we’ll see the highest winter month prices we’ve seen, period.”

While what happens in the gas markets for the rest of winter remains to be seen, what isn’t hypothetical is the growing impact of LNG exports — and by extension global pricing dynamics — on North American gas markets.

Just as important as relative prices between NBP and Henry Hub this winter in determining LNG economics will be the timing of those prices across the winter strip relative to the nomination schedule for turning back LNG cargoes, RBN’s McCullagh said.

“Most Sabine Pass contracts require offtakers to decline cargoes well in advance — by the 20th of the month two months prior to the cargo’s loading,” McCullagh said. “That means we’d need to see strong February prices by Dec. 20 in order for February exports to be affected, or strong March prices by Jan. 20 for March exports to decline. Remember too that we’ll need to watch the NBP forward curve — especially if European weather turns mild and gas prices there decline.