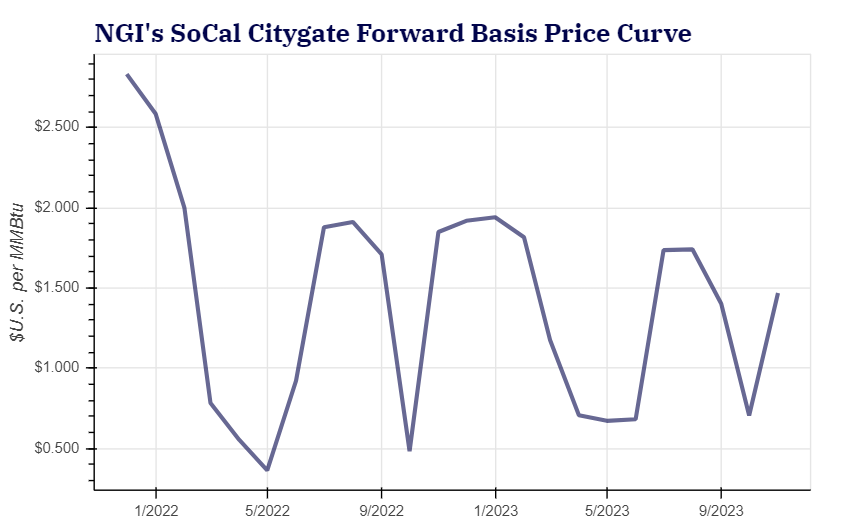 The deep price cuts extended through the winter, with January averaging 95.0 cents lower during the period and the balance of winter (December-March) off an average 91.0 cents, according to Forward Look. In addition to the dramatic decreases in the Northeast, declines along the California forward curves also were noteworthy following a vote by state regulators to increase interim storage levels at the Aliso Canyon facility. Basis prices in the state came off more than 25.0 cents for the prompt month.

In a bid to provide adequate winter supplies for gas and electric customers, the California Public Utilities Commission (CPUC) voted unanimously Nov. 4 to increase to 41 Bcf from 34 Bcf, the amount of natural gas stored at the Aliso storage facility in Los Angeles County. The decision ensures that Aliso operator Southern California Gas Co. (SoCalGas) can meet “minimum reliability needs for the region,” according to Commissioner Martha Guzman Aceves, who offered the proposal. Another plan would have set the capacity to 68.6 Bcf, the maximum amount allowed by the California Geologic Energy Management Division.

Supply conditions for SoCalGas have been tight throughout the summer and into the fall. Receipts at Ehrenberg remain low as L2000’s return to service on El Paso Natural Gas Pipeline was still unknown, Schulz said. The Northern Zone also is limited until further notice to 1,250 MMcf/d, instead of 1,590 MMcf/d, because of operational restrictions placed on L4000 and L235.

Meanwhile, a technical assessment of the upcoming winter by SoCalGas showed that gas demand could reach 4,967 MMcf/d if there were a one-in-10-year cold day event. The best-case scenario for total SoCalGas system capacity for the winter, accounting for Aliso withdrawals as well as significantly reduced receipts at Ehrenberg, would only meet 4,250 MMcf/d, the assessment showed.

“The best-case scenario mentioned assumes 85% pipeline utilization at all receipt points,” Schulz said. “Yet, the past 90-day average utilization rate among all of SoCalGas’ most trafficked receipt points – including Ehrenberg – have only been slightly above 47%.”

However, with only brief periods of chilly weather so far and uncertainty over the timing of more sustained cold, forward prices in the region plunged during the Nov. 4-10 period given the improvement in supplies.

Collapse ‘Too Much, Too Soon’

The steep discounts were part of larger sell-off across the country, dragged lower by a bearish weather outlook, stronger production and inconsistent feed gas demand by U.S. liquefied natural gas facilities that sent benchmark Henry Hub December prices down to $4.893 on Wednesday.

Already two weeks into November, winter weather has largely remained absent from forecasts. Bespoke Weather Services said there continued to be modest fluctuations in the models, but the 11- to 15-day outlook was still unclear. Wednesday’s data had moved toward a Pacific pattern that would be “quite hostile” toward any cold air delivery into the United States, and while Thursday’s runs still leaned in that direction, “they are less emphatic about the change,” the forecaster said.

For now the pattern “simply exhibits variability, with no pronounced skew in either the warmer or colder direction,” according to Bespoke. “This, of course, will change, but it remains unclear which way the pattern will break.”

There are other bearish factors at play in the gas market, too.

EBW Analytics Group said dry gas supply may have surged by 3.0 Bcf/d over the past three weeks. However, analysts were quick to note that pipeline scrapes, particularly at the end and the beginning of the month, often are directionally accurate yet highly imprecise. The recent uptick, they said, “warrants particular attention.”

Bloomberg estimates early Thursday showed Lower 48 dry gas production of around 94.5 Bcf/d. Bespoke, meanwhile, pointed out that although output has fluctuated a bit in recent days, it was still higher than what was seen throughout the summer.

The firm’s Spring Rock Daily Pipe Production Data estimated production shut-ins began on Aug. 26 with a benchmark of roughly 2.2 Bcf/d. Prior to the storm in August, the single West Delta-143 Mars/URSA/Mensa receipt was averaging around 240 MMcf/d. Since initial flow began on Monday, the new receipts have averaged about 155 MMcf/d, hitting a high of around 160 MMcf/d, according to the firm.

Supplies available in underground storage also have improved significantly in recent months. After a difficult summer in which injections lagged historical levels, builds ramped up in the final two months of the traditional injection season and lifted stocks to a comfortable level of about 3.6 Tcf at the end of October. And, with mild weather still prevalent, storage inventories have continued to build into November as well.

On Wednesday, the Energy Information Administration (EIA) reported a modest 7 Bcf injection into storage for the week ending Nov. 5. The increase boosted stocks to 3,618 Bcf, which is 308 Bcf below year-ago levels and 119 Bcf below the five-year average.

Ahead of the EIA report, major surveys showed estimates as low as 3 Bcf and as high as 15 Bcf. For the year-earlier period, EIA recorded an injection of 2 Bcf, and the five-year average is a 25 Bcf build.

Broken down by region, the Midwest added 4 Bcf into storage, according to EIA. The South Central recorded a net 3 Bcf injection, which included a 4 Bcf increase in salt inventories and a 2 Bcf withdrawal from nonsalts. The East also withdrew 2 Bcf, while the Pacific climbed 2 Bcf.

“The storage trajectory has strengthened considerably, and fundamental upside risks have correspondingly declined, along with a lack of extreme early-winter cold and rising supply,” EBW analysts said. “Nonetheless, the recent collapse appears at least partially driven by tremendously mild immediate-term weather and may prove too much, too soon.”

What Lies Ahead For Gas Storage?

Some analysts expect at least one more injection into storage in the next EIA report before withdrawals become more widespread. Early estimates were ranging between an injection of 13 Bcf and 30 Bcf.

EBW analysts said if upcoming government inventory reports validate the higher production figures, in the way of another injection and then small withdrawals, then winter supply risks could nosedive and carry Nymex futures sharply lower sooner than otherwise expected.

However, Mobius Risk Group cautioned that while much was made of stronger production prints at the beginning of the month, the most recent data points have shown a moderation of output in Appalachia and the Haynesville Shale. “There is clearly no guarantee that the trajectory of dry gas production is set to remain flat for the winter,” analysts said.

Further supporting Mobius’ contention that dry gas production from the Lower 48 is not set to materially dampen upside risk this winter are forward prices in Asia and Europe, and basis markets along the Gulf Coast. In Asia, the front of the Japan Korea Marker curve continued to hover north of $30. In Europe, the front of the curve has decoupled from Asia, yet still trades more than $20.

“If the global gas crunch had been solved, spreads from North America to Asia and Europe would likely not be $15 to $25,” Mobius analysts said. “Along the Gulf Coast, and for that matter even in West Texas, basis markets are trading above the Henry Hub and demonstrating both ample spare capacity to move molecules from West to East, and a robust market for forward MMBtus near Houston.”

Mobius pointed out that Houston Ship Channel, most South Texas markets and the Permian Basin’s Waha Hub all were “decidedly positive” to the Henry Hub through March. “Interestingly, the March/April spread in basis markets in these areas are predominantly 50-60 cents wide,” the firm’s analysts said.

Meanwhile, if this winter tracks even a 0.5 standard deviation colder than normal, the risk of a sub 1-Tcf carryout at the end of March would be illuminated, according to Mobius. The next EIA print could be important since the comparable week last year posted a 28 Bcf build, along with 35 fewer population weighted heating degree days.

“It is doubtful that the weather-adjusted comp will look as good as this week, however, more below-normal temperatures are forecast to hit most eastern U.S. population centers at the same time the EIA issues its next release,” Mobius said. “Cash prices have led us lower this week, and they could just as well lead us higher next week.”