May natural gas forward prices fell an average 5 cents between March 30 and April 5 as near-record production and milder weather on tap for the latter part of April dashed any lingering hopes for market bulls, according to NGI’s Forward Look. 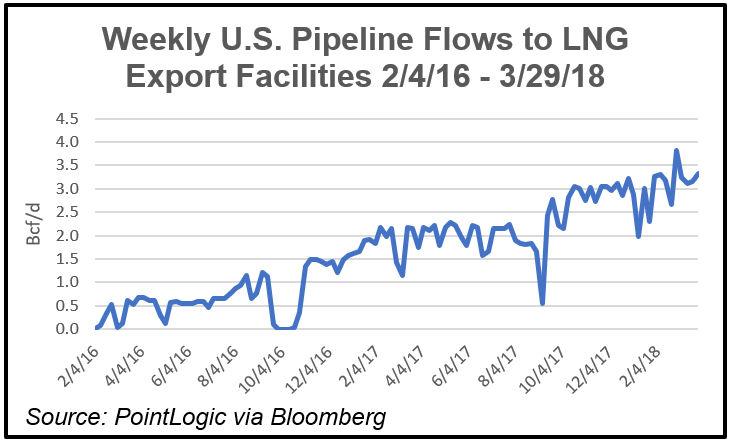 “Weather is about as supportive as it can be this time of year, but its role is rapidly dwindling as heating demand seasonally falls off through April regardless,” forecasters at Bespoke Weather Services said.

Indeed, the latest weather models show intense cold returning to the eastern United States in mid-April after milder conditions late in the week. Another cold shot is then expected to return to the North and East around April 20, according to Bespoke. Although some weather models have the cold remaining in the West for the later part of the month, an active Madden-Julian Oscillation progression has Bespoke weighing more heavily the European model, which calls for more widespread cold.

The result should be gas-weighted degree days that are significantly above average both in the short- and long-term, it said. The pattern does appear unsustainable, however, with indications that past April 20, “it should break down with warmth at least gradually returning.”

Still, the colder trends in the latest forecasts were enough to give Nymex futures a small bump ahead of the weekend. The May futures contract rose 2.6 cents to settle Friday at $2.701.

“Front month futures have only managed a slight gain. There are risks of cooler trends across the northern U.S. for the end of April during the weekend. But will it matter when consistently colder trends over the past month have failed to spark a rally?” NatGasWeather asked.

When the markets reopen, the weather forecaster said it would be looking to see which side controls $2.72, “since neither bears nor bulls have been able to put distance between this important level when given opportunity.”

Not even weekly storage reports from the U.S. Energy Information Administration (EIA) appear to do much to move the market significantly one way or the other. On Thursday, the EIA reported a net decrease of 29 Bcf for Lower 48 gas stocks for the week ending March 30, but the figure came with an asterisk. In a footnote, the agency said the implied flow for the week was actually a withdrawal of 20 Bcf, with “nonflow-related adjustments” accounting for a 9 Bcf decrease in inventories in the South Central Nonsalt region for the period.

Analysts at Mobius Risk Group said while neither the headline or implied flow numbers should be considered bearish (on a weather adjusted supply/demand basis), they do represent a less bullish backdrop than what was observed during the peak winter months. “While there will likely be further debate over the implications of today’s storage change, it is now a matter of fact that the traditional withdrawal season has concluded with 1.354 Tcf in storage. This is the second lowest level in the shale era (2009-present) after 2014’s 0.827 Tcf.”

At present, the year-over-year storage deficit stands at 697 Bcf, and early indications for the next storage report (for the week ending April 6) suggest a “reasonable possibility of once again breaching the 700 Bcf deficit threshold,” Mobius said.

The market also has other positive factors to consider, Mobius analysts said. Among them is confirmation that the Dominion Cove Point liquefied natural gas (LNG) terminal is going to begin exporting cargos in earnest. In late March, deliveries to the terminal via interconnects with Columbia Gas Transmission, Dominion Energy Transmission and Transcontinental Gas Pipe Line began to ramp up, and ship tracking information showed three LNG tankers bound for the Lusby, MD terminal, it said.

Also important on the near-term horizon is the transition from spring to summer, and how quickly cooling degree days gains offset the loss of heating degree days, Mobius said. Currently, late-winter cold is impacting the northern tier of the country, and the southern United States has concurrently seen slightly above-normal cooling degree days, it said.

“This ”perfect storm’ for natural gas demand has yet to translate to stronger forward pricing, but the ramifications of an expanding year-over-year storage deficit should at least provide strong downside support in the near-term.”

“Should” is the key word, however. And near-record dry gas production in the Lower 48 appears to be keeping a stranglehold on the market. On Friday, modeled dry production was reported to be at 79.53 Bcf/d, down slightly from levels just above 80 Bcf/d earlier in the week, according to OPIS by IHS Markit.

Genscape Inc. said the looser storage reports from the EIA recently are consistent with its forward-looking supply/demand and production forecasts, which have been consistently “pointing to supply growth this summer outpacing demand growth (even with expectations for structural demand increases).

Taking a closer look at forward curves across the country, most markets followed closely in line with Nymex futures, although there were a handful of points that went against the grain and tacked on a few cents for the week.

One of those was AECO in Western Canada, which also moved the opposite direction of the Nymex during the previous week. AECO May climbed 2 cents from March 30-April 5 to reach 78 cents, while June rose 2 cents to 79 cents. The balance of summer (June-October) was up 3 cents to 96 cents, and the winter 2018-2019 was up 4 cents to $1.62, according to Forward Look.

Similar to the March 29 Forward Look, analysts at Tudor, Pickering, Holt & Co. Inc. (TPH) are bullish on Western Canadian gas prices. TPH data indicate a balanced market (seasonally adjusted) in 1Q2018 as a cold winter and stronger-than-expected exports resulted in the improper balance. With no production growth on the horizon and price spreads between the AECO and Dawn/Chicago continuing to incentivize export flows, analysts see the AECO market moving into a state of undersupply (-0.2 Bcf/d) in 2018.

TPH analysts said their clients generally agree that current AECO strip pricing is out of touch with supply/demand fundamentals. Pushback, analysts said, has been focused on a supply response to higher pricing, but TPH doesn’t see that as a major risk given that most producers exposed to AECO are generally smaller in scale and/or require balance sheet repair before reigniting growth.

“Ultimately, at this point it’s hard to see what pushes AECO lower, but potential undersupply in the second half of 2018 could result in 40% upside to the current strip,” TPH analysts said.

But Barclays Capital analysts said late last month that heightened activity in the Montney Shale, where condensate demand has increased because of oilsands activity, is driving liquids-rich growth. This has occurred as storage inventories in the region have not seen the deficits that U.S. storage has. This may set up a scenario where Canadian production continues to increase while there is less demand to refill storage, analysts said.

“We anticipate that this will result in higher Canadian export levels to the U.S., with AECO pricing at wide discounts to U.S. basis points to incentivize these exports,” the Barclays team said. “This will prevent some of the potential upside in pricing if a scenario does unfold in which U.S. gas growth finds itself pipeline constrained in places like the Northeast.”