California regulators have proposed setting a moratorium on new commercial and industrial (C/I) connections this winter as a means of ensuring reliability for existing customers. 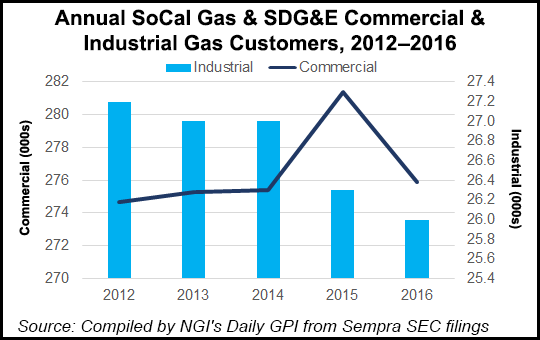 The moratorium would run from Jan. 11 through March 31 if the California Public Utilities Commission (CPUC) endorses the move at its Jan. 11 business meeting. State energy officials, including CPUC President Michael Picker, have expressed concerns surrounding gas service this winter in Southern California.

According to the CPUC’s outlook, the moratorium would help avoid increased demand for gas by new C/I customers this winter until state regulators are assured by the Sempra Energy utility that there is adequate capacity in the system. Currently, SoCalGas is not giving those assurances with three of its transmission pipelines out of service.

Last month, state energy agencies and the Los Angeles Department of Water and Power concluded that the biggest new hurdle for the gas-dependent region is the absence of the SoCalGas transmission pipelines. That factor is coming to light belatedly, considering that one of the idled lines ruptured Oct. 1 and it isn’t certain when it will return to service.

The CPUC estimates that two of the the three transmission pipelines now offline are unlikely to return to service before next spring. This will “further constrain gas service to this region during peak winter months,” a CPUC spokesperson said.

The winter assessment, driven by the Aliso Canyon storage field’s hobbled conditions, has identified a C/I moratorium as one of the potential mitigating factors against impending gas shortages in the region.

“The moratorium would only affect new connections for C/I connections; it would not affect residential connections or the transfer of existing connections,” a SoCalGas spokesperson said.

Given what the CPUC has designated as an emergency situation, the typical 30-day comment period was reduced, so comments on the proposal are due to the CPUC by Jan. 4, 2018.

The CPUC draft resolution that will be on the agenda of its first business meeting of the new year is construed by the regulators to be needed to avoid increasing demand for gas from C/I customers, some of which use huge volumes of fuel. “A combination of events has created an unforeseen emergency situation,” CPUC officials contend.

Despite authorizing use of some withdrawals from Aliso Canyon, deploying more smart conservation measures and other measures recommended as part of the latest technical winter assessment, it remains unclear if those actions would be enough to avoid gas service disruptions this winter, the CPUC said in its draft emergency order resolution.

The state energy officials are calling the amount of transmission lines out of service “unprecedented,” and the draft resolution called for SoCalGas to submit a new Tier 2 advice letter containing the needed tariff changes prompted by the moratorium on signing up new C/I customers.