With storage refilling at a faster-than-expected clip ahead of winter, the Energy Information Administration (EIA) has slashed its projected natural gas spot price for the remainder of 2022 and the first quarter of 2023. 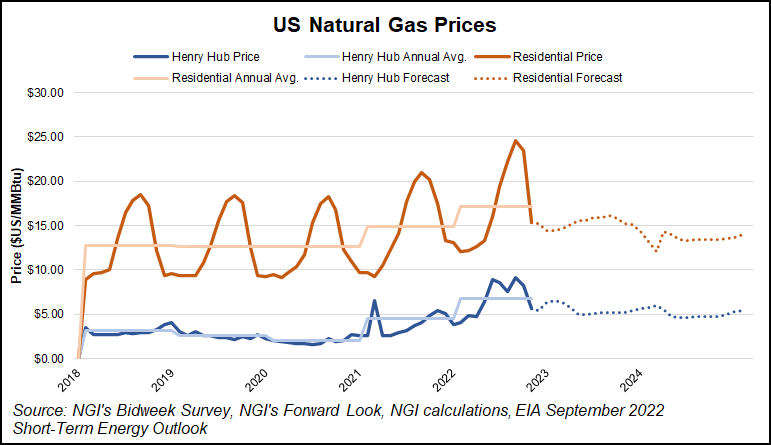 EIA now expects Henry Hub spot prices to average around $6/MMBtu for 4Q2022 and 1Q2023, a discount of more than $1 versus projections issued a month earlier, the agency said in its latest Short-Term Energy Outlook (STEO), published Tuesday.

The latest STEO modeled an average natural gas spot price of close to $5.50 for November, with prices then rising to more than $6 in December and for the first quarter of next year.

Based on government forecasting from the National Oceanic and Atmospheric Administration, EIA said its projections assume colder-than-normal temperatures that would result in 2% more heating degree days versus the prior 10-year average for November to March.

Average Henry Hub spot prices have dropped precipitously as storage inventories have swelled this fall. Prices fell from $8.80 on average in August to $5.66 in October, according to EIA.

Under the latest STEO, withdrawals outpace the five-year average for December and January, “driven by a seasonal decline in natural gas production, rising demand for space heating and increases in liquefied natural gas exports that largely result from the return of Freeport LNG,” researchers said.

While a delay in Freeport’s return to service could weigh on prices for now, “these factors will likely limit any downward price pressures this winter, and the possibility for price spikes and volatility in the case of extremely cold weather is high,” EIA added.

Domestic natural gas production is expected to average 100.4 Bcf/d in November, according to the agency. However, the winter months could bring weather-related production shut-ins, EIA said.

“In addition, natural gas prices for the rest of the forecast remain lower than prices from 2Q2022 and 3Q2022,” researchers said. “We expect that lower prices and some constraints in the pipeline capacity to move natural gas from production fields to consuming markets will reduce drilling activity.”

Production is expected to average 99.7 Bcf/d in 2023, according to the updated STEO. That’s a 2% increase over 2022 levels but represents a decline versus current average monthly production, the agency said.

Further out in 2023, EIA sees prices falling on a combination of rising production and receding demand compared with 2022 levels.

Demand from domestic consumption and exports is seen falling by more than 1 Bcf/d year/year on average in 2023, with supply from production and imports expected to “rise by a similar amount, leading to strong injections during the 2023 refill season,” researchers said.

Meanwhile, EIA said it expects Brent crude oil spot prices to remain near the October average of $93/bbl through the first half of 2023. This forecast carries downside risks because of “weakening global economic conditions,” researchers said.

On the other hand, “higher-than-forecast oil prices could stem from supply disruptions resulting from the European Union’s impending bans on the seaborne import of crude oil and petroleum products from Russia.”

EIA said it still expects global oil consumption to outpace global production next year, leading to higher oil prices in the second half of 2023.

Production from OPEC is expected to fall from an average of 29.2 million b/d in the third quarter to 28.6 million b/d in 4Q2022, similar to month-earlier projections, according to the latest STEO. The cartel’s production is seen averaging 28.9 million b/d for 2023, EIA said.

Russia’s liquids production is expected to fall as a result of its invasion of Ukraine, according to EIA.

Total Russian liquids production would decline from 10.9 million b/d on average in the third quarter before easing to 10.8 million b/d in the fourth quarter. Russian output is expected to average 9.3 million b/d in 2023, according to the latest STEO.

“The forecast is subject to significant uncertainty around the extent to which upcoming European Union sanctions will impact trade flows and the ability for oil suppliers in Russia to find alternative shipping arrangements and buyers,” researchers said.