Natural gas forward prices rose an average 7 cents from Dec. 15 to 21, as northeastern United States pricing locations posted substantial gains on cold weather forecasts while the rest of the country seesawed throughout the week only to end up nearly unchanged, according to NGI’s Forward Look. 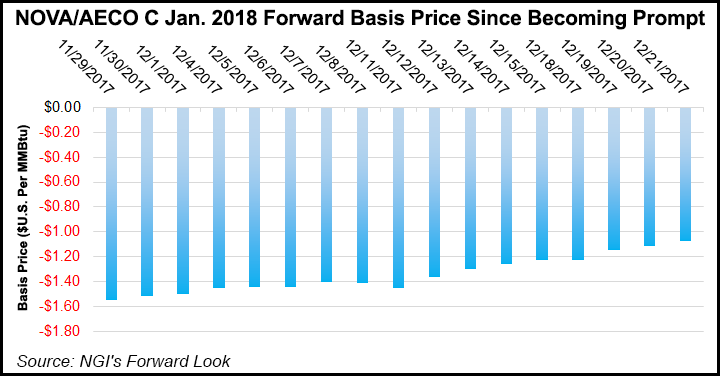 Most of the country followed the lead of the Nymex futures curve, which started the week with a bang as market bulls finally got some good news on the weather front. Early weather outlooks showed colder-than-normal conditions for late December, while strength in the spot market fueled the rally. Nymex January futures ended Monday 13.3 cents higher at $2.745.

But oh how quickly things can change. A small bearish change in weather guidance sent Nymex futures lower on Tuesday, but then additional changes pressured prices again on Wednesday and Thursday. The Nymex January futures contract ultimately ended the Dec. 15-21 period at $2.598, down just 1.4 cents. February futures were down 4 cents to $2.592, while the balance of winter (February-March) was down 5 cents to $2.58.

Not even a supportive storage report from the U.S. Energy Information Administration (EIA) was enough to sway the market. The EIA on Thursday reported a 182 Bcf draw from storage inventories for the week ending Dec. 15, about 10 Bcf higher than the average of predictions leading up to the report. Last year, a 200 Bcf draw was reported for the similar year-ago period and the five-year average is a pull of 125 Bcf.

Bespoke Weather Services said the bullish miss “seems to indicate more significant demand from the first cold shot of December than the market had priced in thus far.

“Though production has been the central focus, the market has yet to see how truly cold weather would flex demand; this impressive print would seem to present further upside for prices, and is seen as very tight along all historical metrics,” the forecaster said Thursday. “Should weather forecasts hold, it would seem to put a $2.75 re-test back in play.”

Christmas came early as Old Saint Nick delivered some supportive weather news for market bulls on Friday. Most guidance continued to show a very intense cold shot to close out 2017 that has not yet begun to lose any of its intensity.

Some guidance shows temperatures returning to back near average by Jan. 5 or 6, while other guidance shows lingering cold for another few days, raising uncertainties in the long-range forecast for the weekend, Bespoke said Friday.

Following Thursday’s supportive EIA print and continued very cold forecasts in the medium range, “we do think prices could potentially bounce into the weekend, especially if traders are afraid to remain short given the amount of heating demand that will be shown in the short range by forecasts early next week,” the Harrison, NY-based forecaster said.

With production still so elevated — trending on either side of 77 Bcf/d — and risks that by the second week of January, weather could turn much warmer, “we are increasingly skeptical of just how much prices would be able to rally,” Bespoke said.

On Friday, the Nymex January futures contract traded in a less than 10-cent range before ultimately settling at $2.667, up 6.9 cents on the day.

NGI Director of Strategy and Commodity Research Patrick Rau said Friday’s rebound was likely a combination of a technical bounce off January’s all-time low at around $2.57, a breakout of the downward channel that has engulfed the January contract since the beginning of December, and a very oversold market, as measured by both slow stochastics and the 20-Day Bollinger band.

“Combine all that with the idea that no one wants to be short going into a short holiday week that is expected to have bitter cold temperatures, and that explains the slight rebound we have today,” Rau said.

The fact Friday’s action is only a slight rebound in the face of cold temperatures shows the market is not all that concerned about the supply picture just yet, Rau added. “Production continues to climb, and the start-up of a few Appalachia pipelines will only contribute to that,” he said.

On the demand side, Dominion’s Cove Point liquefied natural gas facility is starting up a bit later than expected, and the growth of exports to Mexico has stalled despite significant new U.S.-to-Mexico pipeline capacity, due to infrastructure issues on the Mexican side of the border. “So some of the non U.S. weather-driven winter demand doesn’t seem to be materializing as much as some folks probably thought it would,” Rau said.

And market bears will likely have some Christmas gifts of their own under the tree when the EIA on Dec. 28 is expected to report a storage withdrawal near the five-year average due to the mild conditions currently in the country. The following week, however, for the reporting week ending Dec. 29, the EIA’s storage report is expected to show a draw that could be as much as 100 Bcf larger than normal.

Regardless, the week ahead is expected to be a volatile one as many in the market remain on the sidelines following Christmas and as the Nymex January contract is set to expire on Wednesday.

“We would like to think weather trends will again become important, and if so, how temperatures trend Jan. 5-9 could dictate the direction of the open after the long break, with most recent data being a bit cooler,” NatGasWeather said in its mid-day note to clients.

While most of the country brushed off the looming cold weather, Northeast markets surged as demand in the region is expected to grow in the coming days.

Without a holiday adjustment, this would lead to 3.4 Bcf of gas demand. It is possible that some of the weather-based demand increases will be masked by the demand suppression that surrounds the Christmas holiday, the Louisville, KY-based company said.

Genscape is anticipating a reduction of 38 Bcf total less power demand from Dec. 23 to Jan. 5, with Christmas Day bringing 3 Bcf of demand destruction in the Lower 48. It is also worth noting that Christmas is the most demand destructive holiday of the year, the company said.

The strengthening demand sent New England prices more than 60 cents higher on Monday alone, but prices continued to gain momentum throughout the week even as other markets weakened.

Gains elsewhere in the Northeast paled in comparison to those in New England, but were nothing to sneeze at. Transco zone 6-New York January jumped 26 cents from Dec. 15-21 to reach $5.788, although February climbed a far more modest 5 cents to $5.681 and the balance of winter (February-March) picked up 9 cents to hit $4.58, Forward Look shows.

Ongoing oilsands production in western Canada continues to elevate natural gas demand in the region, and prices followed suit for the second consecutive week. AECO January forward prices climbed 14 cents from Dec. 15-21 to reach $1.52, February rose 15 cents to $1.473 and the balance of winter (February-March) picked up 13 cents to reach $1.38, according to Forward Look.

Prices could soon reverse course, however, as demand in the region is expected to fall in the coming weeks. Genscape shows that while demand leading up to Christmas has held relatively steady at around 6.45 Bcf/d, Christmas Week is expected to see demand average around 6.01 Bcf/d. The first week of January is expected to see only a marginal increase, with an average near 6.06 Bcf/d.

On the U.S. side of the border, natural gas prices at Northwest Pipeline-Sumas (Sumas) got a boost from the colder weather and strong demand currently in the region. AccuWeather shows temperatures in Seattle, WA, remaining about five-degrees below normal for the rest of the year.

A similar trend with end-of-summer months selling off and March packages strengthening was seen in 2022 and 2023, Forward Look shows.