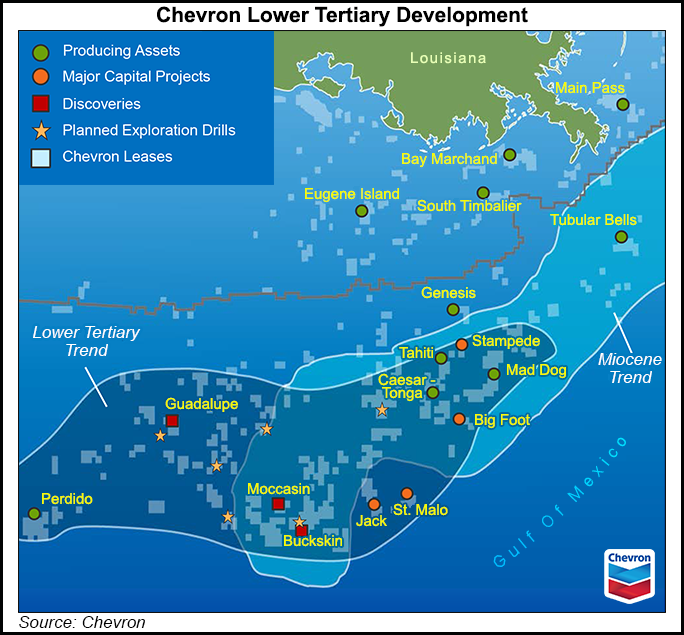 Anchor was sanctioned in December as the first greenfield launch in nine years and the first high-pressure project in the U.S. Gulf of Mexico (GOM). In water depths of 5,000 feet, the estimated $5.7 billion project, with first production anticipated in 2024, is being done in stages. The first stage consists of a seven-well subsea development and semi-submersible floating production unit.

The planned facility has a design capacity of 28 MMcf/d of gas and 75,000 b/d of crude. Potentially recoverable resources are forecast to exceed 440 million boe.

“We are extremely well positioned in the Gulf of Mexico, with asset synergies that are second to none in this active region,” Williams COO Micheal Dunn said. The Tulsa giant owns and operates 3,500 miles of gas and oil gathering and transmission pipeline in the offshore, and it has 1.8 Bcf/d of cryogenic processing capacity and 60,000 b/d of fractionation capacity. The company also has stakes in two floating production platforms, multiple fixed leg utility platforms and numerous related facilities.

Anchor, sited in Green Canyon within the prolific Lower Tertiary Trend of the deepwater GOM, is being developed using technology capable of handling pressures of 20,000 pounds/square inch, opening access to other high-pressure resource opportunities for the industry.

Multiple wells are planned, along with a floating production platform capable of handling the rich natural gas and oil.

Williams plans to leverage its existing GOM footprint and system capabilities to transport gas production to the Discovery system, in which it has a 60% stake; DCP Midstream LP owns 40%. The gas would be transported to Discovery’s processing plant in Larose, LA, with the natural gas liquids fractionated and marketed at Discovery’s Paradis plant also in Louisiana.