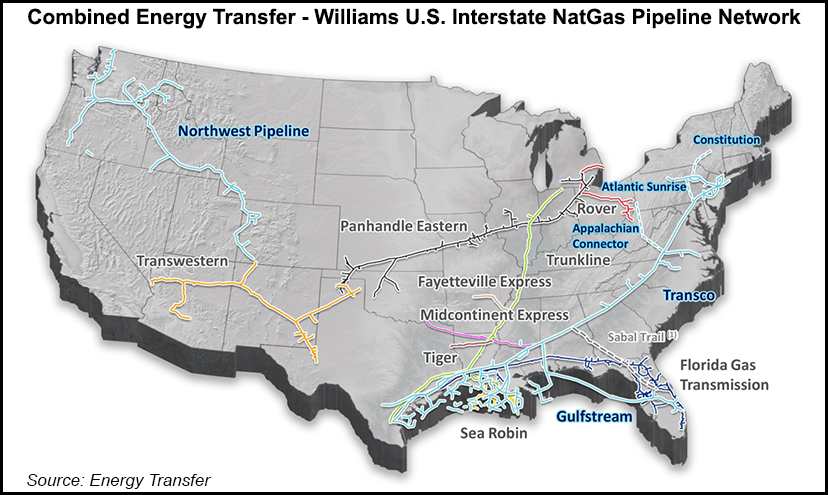 “Williams has reviewed ETE’s private offering of convertible preferred units and concluded it is a breach of the merger agreement. Among other things, the offering provides select ETE investors with preferential treatment on ETE distributions,” WMB said Wednesday. “Williams has commenced litigation to protect the interests of its stockholders. The litigation is intended to ensure that Williams’ stockholders will receive the consideration to which they are entitled under the merger agreement.”

WMB said it is committed to pushing the struggling deal through, but almost since its announcement ETE has had cold feet. Last month in a regulatory filing, ETE disclosed a much-eroded projection of deal synergies, blamed largely on deterioration in the energy commodity markets. Projected deal benefits were cut to $170 million by 2020, which is a 92% reduction from the estimate at the time the deal was announced (see Daily GPI, March 24).

On March 9 ETE disclosed a private offering of series A convertible preferred units. WMB’s litigation, filed in the Delaware Court of Chancery, seeks to unwind the private offering.

In addition to the receipt of WMB shareholder approval, the buyout of WMB remains subject to other customary closing conditions. The deal is expected to close in the second quarter, according to WMB.

“Williams is committed to mailing the proxy statement, holding the stockholder vote and closing the transaction as soon as possible,” it said.

In a regulatory filing Wednesday, ETE said it “believes it has complied, and intends to continue to comply, with its obligations under the merger agreement with Williams and intends to vigorously defend against the claims made by Williams.”

Last month it came to light that former ETE CFO Jamie Welch was suing the company over his recent firing, alleging that it was due to issues not related to his performance (see Daily GPI, March 14). Welch’s departure earlier this year was accompanied by sharp declines in the prices of ETE, Energy Transfer Partners, WMB and Williams Partners LP shares/units (see Daily GPI, Feb. 8).