The Marcellus Shale’s natural gas volumes are continuing to flow higher, but significant revisions in growth expectations by pipeline giant Williams Partners Ltd. (WPZ) has led one analyst to question whether the “excellent adventure” to establish a major natural gas hub is turning into a “bogus journey.” 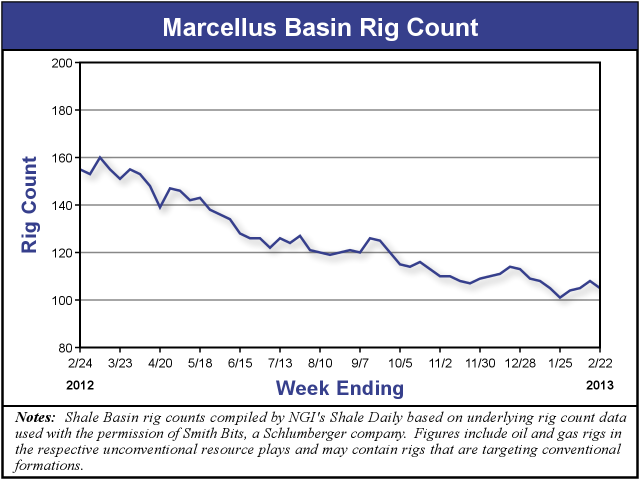 Williams, which owns 70% of WPZ, and the partnership both released their 2012 and 4Q2012 earnings reports on Wednesday. The companies’ projects extend from the deepwater Gulf of Mexico into Canada, but profits in 2012 were upended in part because of a reduction in gas and natural gas liquids (NGL) prices, particularly ethane and propane.

Williams results last year “were impacted by the significant decline in NGL margins during the year, but our fee-based business growth, including 18% growth in midstream during the fourth quarter, helped mitigate our commodity exposure,” said CEO Alan Armstrong. “We are directing the vast majority of the $12 billion of our 2012-2014 growth capital to projects that serve to reduce the effect of NGL prices on our earnings. As well, our newly acquired and significantly expanding olefins business also has the effect of reducing our exposure to ethane prices.”

Williams has cut its 2013 and 2014 earnings and cash flow guidance because of sharply lower ethane, propane and ethylene prices. Williams’ coverage of WPZ, said Armstrong, “is certainly being impacted by the heavy load of investing about $12 billion in growth capital during the three-year period from 2012 through 2014,” which includes huge growth projects across the Marcellus and Utica shales, along the eastern seaboard and into the deepwater.

“There is much good yet to come with these major strategic investments that we continue to invest heavily into,” he said. “This natural gas infrastructure supercycle is creating tremendous opportunities for North America, our industry and importantly, for Williams and Williams Partners.”

But the cut in projections led several analysts to question Armstrong and his management team during a conference call on Thursday.

“To be clear: Marcellus volumes are still growing and will mostly continue to do so for years to come,” said Tudor, Pickering, Holt & Co.’s Brad Olsen and Joe Herman. “However, significant downward revisions in Marcellus growth expectations have led to significant cuts” in Williams’ forecast. They said declining output from the Rockies hasn’t helped “but the decline rate there is more predictable than the trajectory in the Marcellus.”

A lot was discussed during the call by Williams’ management of NGL, gas and ethylene price deck changes, but “downward volume revisions quietly continued apace in [the] new guidance,” with the management team indicating that new volumetric revisions would reduce earnings “to the tune of $80 million in 2013, increasing to $120 million by 2015.”

The “weakening Marcellus volume outlook was corroborated,” said the analysts, by PVR Partners Ltd., which also issued its earnings report last Wednesday. PVR reduced its 2013 guidance on a weak dry gas forecast in the shale play. As the rig count “hits volume expectations, WPZ midstream capital expenditures in 2013-14 was increased $250-300 million a year, largely a result of increasing costs of doing business in the Northeast.”

The Williams team said during the call that the company is moving away from liquids fractionation in the Northeast and instead eyeing a Northeast NGL pipeline. The company acquired a half-stake in Chesapeake Energy Corp.’s former midstream operations, now Access Midstream Partners GP (see Shale Daily, Dec. 13, 2012).

“Given the relatively fragmented producer market in the Utica and Marcellus, and stretched balance sheets preventing exploration and production companies from committing to expensive, long-term pipeline projects…Williams has not received sufficient commitments to proceed with this pipeline yet,” said the TPH analysts.

Developing a heavy pipeline “is an admission that fractionation is not the answer to Northeast bottlenecks,” they wrote. However, when WPZ acquired Caiman Energy’s midstream business last year (see Shale Daily, March 20, 2012) it was “with the intent to buildout Marcellus fractionation,” and it still officially plans to develop nearly 100 million b/d of incremental fractionation by 2015.

So, what gives?, the analysts asked. They believe that while it awaits a “pipeline solution to come to market,” Williams is “sticking to its guns.” Ultimately, “we believe that the fractionation portion of Caiman [now Ohio Valley Midstream (OVM)] will be significantly reduced in size and that capital will be redirected to building a long-haul takeaway solution. The Caiman opportunity set will likely be downsized in 2013, but the question remains: will Williams or WPZ end up chosen as the Northeast’s heavy NGL takeaway provider?”

Armstrong said Williams and the pipeline partnership “will be in a catch-up mode for some time…Things have moved faster in OVM, and particularly again from a liquids production standpoint, both in terms of richer gas and higher degrees of condensate. I think we’re very confident in our ability to catch up, but I would just say given the productivity of those reserves, we’re going to be on a treadmill there for a long, long time to come and likely will be having some lagging excess capacity or excess production held behind our infrastructure for quite a while.”

Williams has a “very good vantage point,” he said, given its investment in Access and in the coming Blue Racer system, but he acknowledged that he didn’t think “local fractionation is the answer up here. It is certainly going to overwhelm these markets and something large-scale is going to need to be built. And even frankly, as it supports an ethylene cracker that [Royal Dutch Shell] Shell has announced and others have talked about, that having a big raw make line provides a lot of flexibility in terms of ethane access back and forth between those markets. And so we think that something definitely needs to be done there and we’re working very hard on that…

“It’s not as simple as just building a raw make pipeline into the Gulf Coast. There’s a tremendous amount of issues about where you land that product and having the distribution network to distribute that product into the market and into big market outlets, as we go forward…I think if it was just as simple as just raw make pipeline, we would probably be past that at this point. But there’s quite a bit of work we’re doing on the distribution and storage end.”