Hot on the heels of its recently announced Transcontinental Gas Pipe Line Co. (Transco) Leidy South Expansion, parent company Williams said it was eyeing another midstream project that would extend Transco’s reach with more than 1 Bcf/d of firm transport capacity in Zones 3, 4, 5 and 6. 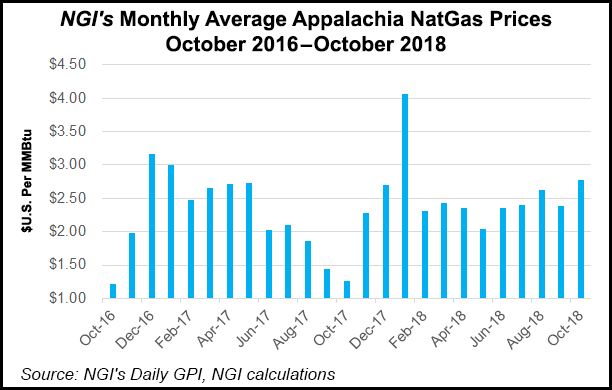 Speaking on a call Thursday to discuss quarterly earnings, Williams CEO Alan Armstrong said the company was awaiting final board approvals and expected to announce the new project in the fourth quarter.

“We continue to enjoy a backlog of attractive investment opportunities, and third-quarter 2018 results reflected continued steady and predictable increases in each of our key financial metrics,” Armstrong said.

Williams brought online its 1.7 Bcf/d Atlantic Sunrise project in early October, and management expects the new infrastructure to drive growth for the remainder of 2018 and beyond as the pipeline has “opened up new markets for Marcellus producers” and is now driving accelerated growth in its Northeast gathering and processing (G&P) business segment, Armstrong said.

The company chief noted the positive impact Atlantic Sunrise has had on Appalachia gas pricing, as prices rose immediately after in-service “and continued to drift up for the balance of October. That’s the most significant change we’ve seen from any piece of infrastructure.”

In addition, Armstrong said he expects dry gas production to increase now that Atlantic Sunrise is in operation as over the last nine months, several producers (including Southwestern Energy Co.) have ramped up efforts to put infrastructure in place in the Ohio Valley. “I think we’re going to see a good balance between wet and dry gas.”

Meanwhile, construction was progressing ahead of schedule on Williams’ Transco Gulf Connector project, with in-service expected in January. Its Gulf East-Norphlet project, which serves Royal Dutch Shell plc’s Appomattox deepwater Gulf of Mexico oil and gas project, was also ahead of schedule and is due in service by mid-2019.

Higher natural gas gathering volumes in the Northeast and the Transco expansions significantly increased service revenues during the third quarter, helping the midstream company boost its net income by $96 million year/year. Williams, which in August closed on the acquisition of Williams Partners, reported a net income of $129 million (13 cents/share) for 3Q2018.

The increase was largely due to a $227 million improvement in operating income from an increase in service revenues associated with Transco expansion projects placed in service in 2017 and 2018. The company also attributed the gains to an 8.7% increase in gathering volumes in the Northeast from 3Q2017 and to higher natural gas liquids (NGL) margins reflecting higher NGL prices in the West segment.

Williams generated $768 million in distributable cash flow (DCF) during the third quarter, compared with $603 million in DCF in 3Q2017.

“This quarter’s strong execution and results highlight why we are so bullish on the future,” Armstrong said.

Given its year-to-date financial and operational performance, Williams expects its full-year results to trend “toward the upper end of our financial guidance for 2018.”