The natural gas industry may no longer equivocate about whether to responsibly produce and transport lower carbon fuel, as customers are lining up in North America and abroad, according to a Williams executive. 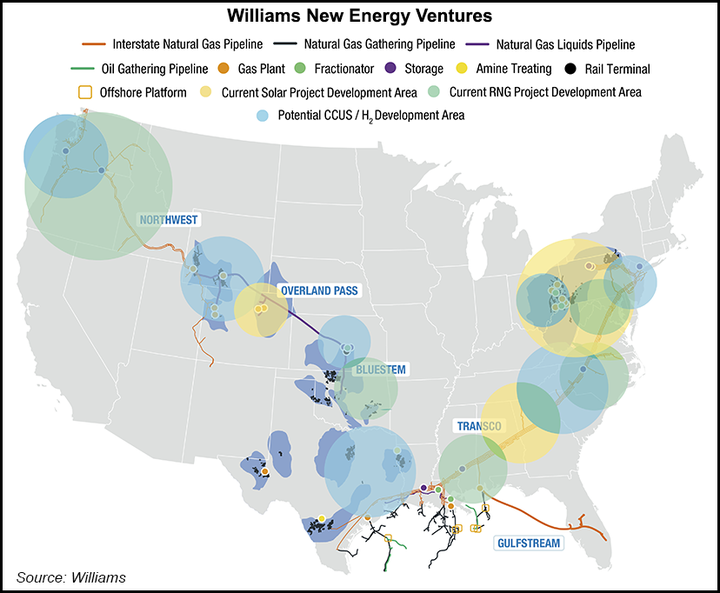 “RSG gives us a great opportunity” to demonstrate “authenticity,” as the company has committed to reach net-zero emissions by 2050. “RSG can be a proof point for our climate commitment progress as well,” she told the audience.

Energy initiatives are expanding within the framework of environmental, social and governance (ESG). Using differentiated gas demonstrates those commitments to the all-important investor community too.

There are various ways to certify gas, which when done well, provides transparency across the “full value chain,” John said. It also ensures “our social licence to operate…We need to solidify natural gas’ place in the clean energy future.”

John joined the Tulsa-based midstreamer after working for 27 years at BP plc. For 19 of those years, she worked for North America’s No. 1 natural gas marketer in its global supply and trading organization.

However, “it’s time for a full value chain approach to truly classify a product as responsibly sourced. We need to work to incorporate the emissions from every segment of the natural gas value chain, from the wellhead to the end users.”

To verify the emissions reductions is going to require “multiple technologies that can monitor, integrate and explain the overlapping data. And we’ll create that…as part of the clean energy future.”

The initial RSG focus by Williams “will likely be in the Haynesville Shale,” according to John. The effort then would be expanded for gas transported by the behemoth Transcontinental Gas Pipe Line, aka Transco. “But I see it very quickly being deployed across all of the asset footprint…

“Look, the time is right to use carbon intensity as an attribute of delivered natural gas. We have the technology advancements that we need for data transparency. We have that technology advancement in carbon emissions monitoring and data accuracy. And I think one of the most important things is the ability to collect and handle the large data sets that are needed.”

How Important Is Certified Natural Gas?

To demonstrate the value of reducing emissions and verifying those cuts to customers, John said to look no further than the case of the Tacoma liquefied natural gas (LNG) bunkering hub in Washington.

Sponsor Puget Sound Energy is required by state regulators to use Canada natural gas as feedstock. A requirement in a construction permit issued in December 2019 by the Puget Sound Clean Air Agency (PSCAA) states that “the owner and/or operator shall ensure that the sole source of natural gas supply used in all operations at the Tacoma LNG facility comes from British Columbia or Alberta, Canada…”

The stipulation is based on a lifecycle analysis conducted in 2018, which included the impact of upstream greenhouse gas emissions from the produced gas. Regulators determined that Canada gas had a lower footprint than U.S. gas. The emissions from domestic gas “may be as much as five times higher than those for Canada.”

The PSCAA noted that Canada’s provincial and federal regulatory requirements are intended to reduce methane emissions, which include rules to require companies to control methane leaks from production equipment.

“I was just really, really surprised” by the PSCAA’s permit requirement, John told the audience.

“I mean, that a state in the U.S. would say that we have to source gas from Canada because that gas has lower carbon intensity is pretty amazing to me…We need to do something about this. And I think RSG gives us a great opportunity to do that and to move quickly in this space.”

Using her BP trading background, John said she was “looking for those commercial opportunities. How can we leverage this work to be sure that we make money, instead of just doing the stabilization of our core businesses, which would also be great?”

The goal is to use quantification, monitoring, reporting and verification, aka QMRV, to increase market transparency. “I really want to get to a place where we’re actually reducing emissions, and not just talking about measuring them,” John said.

The New Energy Ventures team also wants to enhance reporting practices “to meet the customer demands and what the market needs.” The key is that “when we say it is responsibly sourced in one place, or we say that we verify the carbon intensity through measurement, that we’re all talking the same language.”

Most of the emissions reporting to the U.S. Environmental Protection Agency is “by factors, not by measurement. So, this is an opportunity to really take that to the next level.”

To be credible, differentiated gas standards need to have “audited and verified data,” she said. “I believe this will include carbon intensity, as well as other ESG attributes” and risk factors, which eventually could include blockchain.

A blockchain database stores information chronologically. Unlike a “typical” database, blockchains store data in blocks that are chained together. New data is entered into a new block and then chained to the previous block.

One of the “biggest barriers to making blockchain work” is not the technology, John said. “It’s the agreement across industry. It’s getting all of us in the room to agree on what type of standard makes sense,” such as measuring and monitoring emissions.

Williams is working on standards through its membership in GTI’s Veritas Project, which is focused on measuring and verifying differentiated gas. Williams also joined the Collaboratory for Advancing Methane Science, or CAMS, which is sharing best practices and looking for the best technology and data solutions to measure methane. As a member of the Our Nation’s Energy Future, aka ONE Future for many years, Williams also works with members to voluntarily reduce methane emissions across the value chain to less than 1% by 2025.

“Developing standards across the industry will build the credibility with end users that we need, and the consistency needed to support dealmaking,” John said.

John expressed some concern about how the certification protocols could evolve.

“We may not end up with a standard certification protocol for RSG,” she said. “I’m hopeful that we might, and we’re doing some work in that space with Williams. But I think it’s possible that there’ll be different standards across the world.”

What she said has to be included is flexibility in the certification process.

“It will be important to allow any certification or auditor to verify that we meet the carbon intensity that we say we do, and we meet the ESG requirements that are expected of us.”

The focus has to extend beyond certifying only methane leak detections as some efforts are focused “just on that.”

Creating a complete “monitoring, tracking and measuring system” for carbon dioxide equivalent emissions “will be a big technical challenge, but I think we can get there. And we’ll have to get there if we want to meet the net-zero commitments that so many people have put out.”

Evolving beyond only low-carbon solutions is on John’s to-do list.

Solutions would be centered around what Williams does well, which is relying on its customer relationships, broad knowledge and “ability to get things done…

“Look, society faces an unprecedented challenge to meet the world’s growing energy demand, while also addressing the risk of climate change, with practical solutions that we can execute on right now.”

Over the past 15 years, Williams has added around 20 Bcf of gas capacity while emissions have fallen by close to half. The work is far from done, though.

“Right here, right now, the opportunity is a relentless focus on methane emissions reductions,” John said. “We’ve got to keep that gas in the pipe and ensure that employees understand every place that methane comes out of our system and are mindful of the impacts of their decisions.”

In the near term, expanding renewable natural gas (RNG) projects is underway, with Williams building interconnects and pipeline extensions for customers. The RNG business now extends into Idaho, Ohio, Texas and Washington state.

To offset the electricity usage at existing facilities, Williams also is incorporating solar capacity, with photovoltaic systems built behind the meter. The first projects, set to be in service in 2023, are in a queue of more than a dozen projects that would have around 375 MW of total capacity. The solar capacity could reduce 16% of estimated annual energy demand across the company.

The long-term path to reach net-zero includes preparing for breakthrough technologies in carbon capture, storage and utilization, as well as synthetic gas and using hydrogen as a fuel source.

“Look, I come from a trading background…I’m a big believer in letting financial markets help us solve these problems. I believe that the voluntary carbon offset program will be part of what we do there.”

A carbon market also could be the solution to monetize RSG, John said. Given her trading background, she was asked whether price indexes could be created for gas that is deemed to be certified.

“I think it is quite possible, but that depends again on us figuring out the standard,” John said. “How will that come about? I mean, it could be an exchange to develop a standard and just say, ‘this is what we choose.’ That is quite likely, but right now it’s too squishy…

“But when I started thinking about what would drive someone to pay extra…and how would that premium be determined, between regular natural gas and responsibly sourced gas, I come back to what do we believe around carbon pricing carbon offsets?

“I come back to a carbon-pricing model,” John said.

For Williams, the idea today is to prove up the low-carbon projects adjacent to the core footprint across the United States. The plan “is purposeful,” she said. The company’s broad infrastructure footprint allows it to prove that “new opportunities on large asset footprints are really scalable…We see a lot of startups and new technologies that need somewhere to prove that what they can do can be done.”

The world needs “clean, reliable and affordable energy,” John said. “This idea of being a reliable performer…will be key to telling the story…around why natural gas needs to be part of the story moving forward in the energy transition.”

Helping customers achieve carbon reductions “is critical to the story of sharing that natural gas should be part of the future of energy solutions,” John said. “We’re also focused on creating economic value. This team is a Business Development team, so we’re about finding deals that make sense and bring value to the company. But we’re also looking to target opportunities where our midstream competencies provide that competitive advantage.”