Williams cut its quarterly dividend to 20 cents from 64 cents and outlined plans to strengthen its balance sheet and credit profile as it builds out large-scale infrastructure to capitalize on growing demand for natural gas. 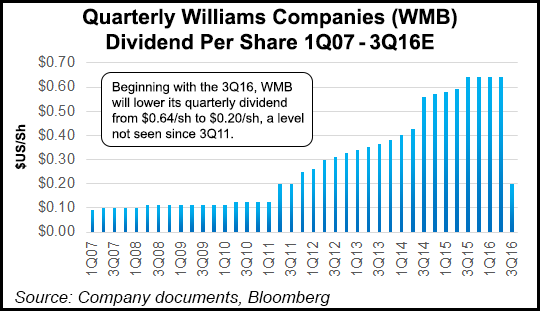 “[W]e currently have projects in negotiation or execution to add 7.6 Bcf/d of capacity to markets served by Transco through 2020, which amounts to 65% of Wood Mackenzie’s five-year projected demand growth for natural gas along Transco’s corridor,” CEO Alan Armstrong said. “In 2018, we expect to have twice as much fully-contracted capacity on Transco as we did in 2010.”

Williams reported second quarter adjusted earnings before interest, taxes, depreciation and amortization (EBITDA) of $1.065 billion, a $48 million increase over second quarter 2015. The improvement came mainly from a $57 million increase in adjusted EBITDA from the Williams Partners segment, partially offset by a $9 million decrease for the Williams natural gas liquids and petchem services segment.

The adjusted EBITDA increase at Williams Partners was due primarily to $55 million lower general and administrative, and operating expenses. For the second quarter, Williams Partners generated $737 million in distributable cash flow (DCF) compared with $701 million in DCF for the same period last year. The $36 million increase in DCF was driven by a $57 million increase in adjusted EBITDA, partially offset by $38 million higher interest expense. The cash distribution coverage was 1.02x versus 0.97x in second quarter of 2015.

According to Bloomberg consensus estimates, Wall Street had been expecting Williams to cut its dividend to 37 cents and 31 cents during the third and fourth quarters of 2016. But despite the deeper than anticipated dividend reductions, the Street seemed to welcome the news as shares of the company were up nearly 4% in intraday trading on Tuesday. The new annual 80-cent dividend per share still represents a forward dividend yield of 3.4%, more than the current 2.1% yield for the S&P 500 Index.

The lower “…dividend level will allow Williams to annually retain approximately $1.3 billion that can be reinvested into Williams Partners to enhance its ability to maintain its distribution and increase its distribution coverage, while providing the partnership with the flexibility to reduce debt and maintain its investment grade ratings,” the company said.

Jefferies analyst Christopher Sighinolfi said Williams is the third company he follows to cut its dividend in the last year. The Williams cut is the largest since Kinder Morgan Inc. (KMI) slashed its dividend last year (see Daily GPI, Dec. 9, 2015; Dec. 4, 2015). Sighinolfi has a “buy” rating on Williams and a “hold” rating on Williams Partners. He compared financial metrics of KMI and Williams and wrote that Williams compares favorably with KMI.

During an earnings conference call Tuesday, Armstrong emphasized the importance of growing natural gas markets to Williams and Williams Partners and the projects under way to capitalize on them.

“This is very clear and identifiable growth in our business that’s coming from all these fully contracted projects,” he said. “We’ve got a couple of billion dollars this year, a little over $3 billion next year, and about a little more than two-thirds of that is coming from these big regulated projects, and they are really going to drive growth well beyond 2017.

“It really is important that our investors understand how critical the expansion of natural gas markets is to our strategy, and we are very confident that that’s occurring…” Expansions of Transcontinental Gas Pipe Line (Transco) and other projects are coming “on the back of low-priced natural gas, and ultimately all of that demand pull is going to pull out of the great basins that we’re exposed to on the supply side,” Armstrong said. “So I would say for the next couple of years the growth is going to be coming largely from the demand side. But when that demand shows up, the volumes have to flow behind that, and we’re extremely well positioned to capture that on the back end.”

For a full listing of 2Q2016 industry earnings calls, including links to NGI’s coverage of both the company and the call, please see NGI’s 2Q16 Earnings Calls List PDF.