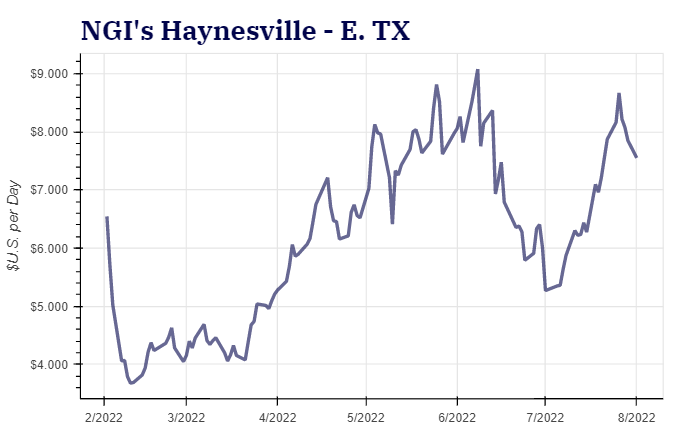 The past two months rank among the hottest Junes and Julys on record in the United States, respectively, while fallout from Russia’s invasion of Ukraine boosted already elevated demand for American supplies of liquefied natural gas. These demand drivers have catapulted natural gas futures above $8.00/MMBtu this summer, double year-earlier levels, with more heat on the way in August and no end in sight to the war.

Armstrong said the midstream giant sees demand enduring and production beginning to ramp up to meet it. Indeed, output has climbed to a 2022 peak around 97 Bcf/d at points this summer, according to Bloomberg estimates. When it has dipped below that level, maintenance events have largely taken the blame, as opposed to producers intentionally pulling back. Armstrong said the lofty prices have enticed producers to boost output.

“Volumes on our systems have finally begun to respond to the higher prices that we’ve seen in the gas space,” Armstrong said.

Consumption, meanwhile, “continues to increase in the face of higher natural gas prices, which speaks to the continued inelastic demand for natural gas, both here and abroad,” he added.

Even as central banks in the United States and Europe hike interest rates to combat soaring inflation, creating the specter of recession, the Tulsa-based Williams expects demand for its services to endure given the multiple demand drivers.

“We don’t expect much to change should a recession come to fruition,” Armstrong said.

Williams is in the midst of investing $1.5 billion to grow its natural gas transportation capacity by nearly 2 Bcf/d over the next few years to meet demand. Among six transmission projects the midstreamer is developing is a 364 MMcf/d expansion on Transco, the country’s largest gas system.

Williams earlier this year also closed on its acquisition of Quantum Energy Partners’ Trace Midstream. The purchase more than doubled its Haynesville Shale footprint to 4 Bcf/d-plus from 1.8 Bcf/d.

Executives were upbeat on activity in the Haynesville. “We’ve seen a rapid ramp in volumes that will continue through the remainder of the year,” CFO John Porter said on the earnings call.

The new growth projects come on top of a spate of expansion efforts in 2021 that Williams said are now paying off. These include a joint venture (JV) with private Haynesville producer GeoSouthern Energy Corp. Williams gathers all South Mansfield production.

This followed an upstream JV with Crowheart Energy in the Wamsutter field of the Greater Green River Basin of Wyoming. That pairing combined the legacy Crowheart, BP plc and Southland Royalty Co. LLC upstream assets into one contiguous footprint with more than 3,500 operating wells and 3,000 potential development locations.

Cash flow from operations reached $1.1 billion for the second quarter, up 4% from a year earlier.

The company expects 2022 growth capital expenditures (capex) of between $2.25 billion to $2.35 billion. It projected maintenance capex of between $650 million and $750 million.