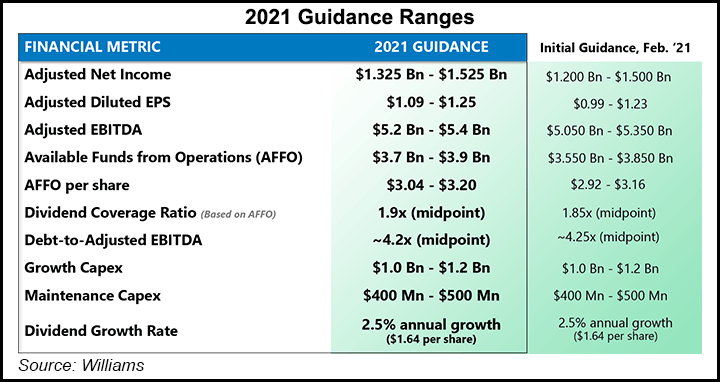 “The pricing run-up that we’ve had more recently and the continued demand growth is really starting to obviously put pressure and kind of wake up the forward markets a bit,” CEO Alan Armstrong said Tuesday during a call to discuss quarterly results. “And certainly, we are seeing responses from our producers looking to take advantage of that.”

Natural gas futures spiked about 10% in July, topping the $4.00 threshold for the first time since 2018. Bullish sentiment was driven by both robust summer cooling demand and steady U.S. exports of liquefied natural gas (LNG). With supplies tight in Europe and Asia, demand on both continents for U.S. LNG is running high, and that is expected to continue through 2021.

“The area that I would say we’ll see kind of the quickest response” to higher prices “is probably the Haynesville,” Armstrong said. The Tulsa-based Williams is seeing a “tremendous amount of drilling activity that’s gearing up in the Haynesville right now” that could influence activity in the second half of this year and into 2022.

Williams reported record quarterly gathering volumes of 13.79 Bcf/d in 2Q2021, boosted by a 9% year/year gain in its Northeast operations.

Along with its earnings results, Williams announced a JV with private Haynesville producer GeoSouthern Energy Corp. GeoSouthern agreed to buy a 50% interest in Williams’ South Mansfield assets and commit to a long-term development plan. Williams said it would continue to gather and treat all South Mansfield production, and it plans to market production through fixed fee arrangements.

This followed Williams’ announcement in July of an upstream JV with Crowheart Energy in the Wamsutter field of the Greater Green River Basin of Wyoming. That pairing combined the legacy Crowheart, BP plc and Southland Royalty Co. LLC upstream assets into one contiguous footprint to unlock long lateral development. The assets consist of more than 3,500 operating wells and 3,000-plus potential development locations.

“Under this agreement, GeoSouthern will carry a portion of our drilling cost and will earn increased ownership in the leaseholds as they deliver on agreed-to development milestones,” he said.

“Second, it provides Williams with the opportunity to optimize all of the natural gas production in the area through fixed fee agreements marketed by our Sequent business,” Armstrong added. “And third, with South Mansfield being in close proximity to Transco, it provides Williams future development opportunities, including the ability to source and deliver responsibly sourced natural gas into the growing LNG market.”

Importantly, he said, both of the new JVs “improved the value proposition in the Wamsutter and the Haynesville basins, as we’re partnering with well-positioned, high-performing local operators and the deals require development of the properties driving volumes to our midstream and downstream assets.”

Williams’ second quarter capital expenditures totaled $685 million, up from $307 million a year earlier, when it joined most of the industry in scaling back spending amid the pandemic.

Cash flow from operations topped $1.0 billion for 2Q2020, down from $1.1 billion a year earlier.  At the close of the second quarter, Williams had cash and cash equivalents of $1.2 billion and long-term debt of $21.1 billion.

Looking ahead, Armstrong said, “We expect a constructive natural gas macro backdrop to continue to drive significant value for our business.”

Among other projects, Williams is working on its Leidy South expansion in Pennsylvania, which is designed to carry about 600 MMcf/d of gas capacity to Atlantic Seaboard markets. Armstrong said the system is on track to be in full service for the winter heating season. The Transco Regional Energy Access pipeline also is under development.

“Recent commitments to Transco market area expansions, coupled with producer commentary on Transco projects such as our Leidy South and Regional Energy Access projects, are clear pathways to growth for our Northeast gathering volumes for years to come,” Armstrong said.