In a “monster deal,” Williams (WMB) said Sunday it is paying about $6 billion to increase its ownership in Access Midstream Partners LP (ACMP). WMB then plans to merge its master limited partnership (MLP), Williams Partners LP (WPZ) with ACMP to create a midstream behemoth that will further mine the “supercycle” in energy. 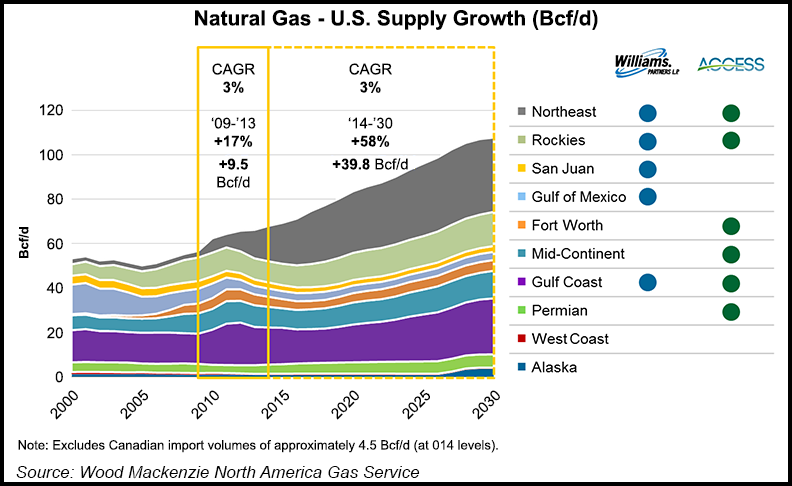 The merged MLP, to be called Williams Partners LP, would have adjusted 2015 earnings before interest, taxes, depreciation and amortization of about $5 billion, WMB said, and would feature “large-scale positions” across three components of the midstream sector:

WPZ and ACMP each have assets in the Northeast, Rockies and Gulf Coast, while ACMP also brings to the table assets in Fort Worth, TX, the Midcontinent and Permian Basin. Additionally, WPZ has a presence in the San Juan Basin and in the Gulf of Mexico.

During a conference call with analysts on Monday, Armstrong was particularly enthusiastic about opportunities in the Northeast related to the Marcellus and Utica shales.

“…[T]he Northeast between the Marcellus and the Utica is a great example…” he said. “The kind of position we have now in the Northeast…is very impressive and gives us a tremendous amount of strength in terms of coming up with additional infrastructure solutions down the road.”

WMB said it plans to hasten dropdowns of remaining NGL and petrochemical services assets and projects late this year or early next, accelerating WMB’s transformation to a pure-play general partner (GP) holding company.

“Williams expects the merged partnership will be a synergistic combination that is well-positioned to benefit from the ongoing energy infrastructure super-cycle. The company’s operations represent a strategic, expanding footprint that connects the best supplies with the best markets,” WMB said. The merged partnership would be based in Tulsa, OK. Oklahoma City would become one of the partnership’s major offices, which would also include Houston, Pittsburgh, Salt Lake City and Calgary.

“In addition to creating a unique, large-scale MLP with one of the most substantial growth platforms in the industry and operations in top supply-growth basins, the proposed merger of Williams Partners and Access Midstream Partners is designed to deliver best-in-class distribution growth with strong coverage and investment-grade credit,” Armstrong said.

Analysts at Tudor, Pickering, Holt & Co. (TPH) seemed to agree, calling the planned deal a “monster” and and saying the transformation is a good idea for all parties, but for some more than others.

The “…mind-numbing deal is generally good for all parties involved, although WMB emerges as a relative winner…” TPH analysts said in a note Monday. The deal supports continued dividend growth at WMB while it “returns WPZ to [the] ranks of high-quality LPs,” TPH analysts said.

WMB had been struggling to keep its place among peer GP holding companies due to concerns about WPZ’s less than one-times multi-year coverage ratio, TPH said. “In the absence of a competitive currency at WPZ, WMB was forced to expand its balance sheet and incubate operating assets at the GP level, unsure whether WPZ’s high cost of capital would allow WMB to sell projects into the MLP,” the analysts said. “With WPZ-related financing concerns eliminated, WMB can drop [the] remaining Canadian assets down to WPZ and return to a ‘single line item’ GP, with all cash flows from financial interests in [the] ‘new WPZ.'”

The deal means about 20% upside for WPZ, TPH said, “…as long-term coverage problems are solved overnight with merger into coverage-rich ACMP.

Armstrong said during the conference call that the deal has turned out to be better financially than what the company had been expecting.

Like other midstream players of late, WMB had been the target of activist shareholders, who, among other things, suggested that the company acquire the rest of ACMP (see Daily GPI, Feb. 21; Dec. 17, 2013).

When it was formed in 2009, ACMP was called Chesapeake Midstream Partners and was a joint venture of Global Infrastructure Partners and Chesapeake Energy Corp. Global bought out Chesapeake’s share and changed the company’s name in 2012 (see Shale Daily, June 11, 2012), the same year that Williams acquired its half interest (see Shale Daily, Dec. 13, 2012). Chesapeake Energy remains the largest customer of ACMP, which also counts among its customers Anadarko Petroleum Corp., Total SA, Statoil, and Mitsui & Co.

“We are very focused on being No. 1 or No. 2 in whichever basins we’re in,” Armstrong told analysts Monday. “When we looked around two years ago and started trying to find out where our next basin might be…we found that Access already had, through the Chesapeake dedication, already had a lot of these important gas plays, they already had major positions in them, and that’s what very much attracted us.”

Assuming the merger is consummated this year, the merged MLP is expected to have a 2015 distribution increase of at least 25% above ACMP’s current guidance of $2.79/unit, with a growth rate of 10-12% through 2017 and strong coverage. Distribution coverage is estimated to be about 1.2 times in 2015 and at or above 1.1 times through 2017, WMB said.

Williams agreed to acquire the 50% general partner interest and 55.1 million LP units in Oklahoma City-based ACMP that are held by Global Infrastructure Partners II for $5.995 billion in cash, increasing its general partner (GP) share to 100% and its limited partner (LP) ownership to 50%.

At the close of trading Friday, the 55.1 million LP units had a market value of $3.6 billion. Upon closing, Williams would own 100% of the general partner and 50% of the limited partner interests in ACMP. The deal follows Williams’ acquisition of its 50% GP interest and 23% LP interest in ACMP in December 2012. Williams expects the acquisition to close during the third quarter.

“Since Williams invested in ACMP in 2012, it’s been clear to me that our companies share many common values on matters such as customer service, operational excellence and the focus on the development of our employees,” said ACMP CEO J. Mike Stice. “With respect to the proposed merger of ACMP and WPZ, I am confident that ACMP’s board of directors will engage in a thorough analysis and process to provide a positive outcome for ACMP unitholders.”

ACMP growth is driven by expected production increases in its portfolio of more than 8.3 million acres under dedication in major shale and unconventional producing areas, including the Marcellus, Utica, Eagle Ford, Haynesville, Barnett, Midcontinent and Niobrara, WMB said.

Williams expects to close the acquisition of Global’s ACMP interests in the third quarter. Closing of the acquisition is subject only to the receipt of antitrust regulatory approvals.

The company plans to fund half of the $5.995 billion acquisition with equity and the remainder with a combination of long-term debt, revolver borrowings and cash on hand. Revolver borrowings would be repaid with proceeds from the planned dropdown of NGL and petrochemical services assets and projects. Williams has a backup financing commitment for a $5.995 billion interim-liquidity facility with UBS Investment Bank, Barclays and Citigroup.

Along with the transformative deal news, WPZ reported that delays are holding back restoration of operations at its Geismar olefins plant in Louisiana. The plant had been expected to restart this month (see Daily GPI, May 2) after an explosion and fire one year ago (see Daily GPI, June 14, 2013). “We are now targeting late July for initiation of the [Geismar] startup process,” Armstrong said.

WPZ cut guidance for this year, mainly on the Geismar delay and uncertainty over a related insurance payout, but it said it is retaining previous guidance for 2015 and 2016.

Compared to the top-line news in Sunday’s press release, the negative report on Geismar seems “trivial,” TPH said; however, it “…would have rocked WPZ a few weeks ago…”

“Williams’ intention to become a pure-play general partnership upon completion of this transaction results in a weaker credit profile,” said S&P credit analyst Michael Grande. “Although Williams has heretofore been largely reliant on distributions from WPZ, it still owned some assets directly. Now, given its strategy as a pure-play general partnership, it will be fully reliant on subordinated distributions from WPZ to service its debt obligations.”

Grande added that “a significant portion” of WMB’s cash flow comes from incentive distribution rights paid by WPZ, which “…essentially represent a leveraged cash flow stream that can increase or decrease disproportionately as WPZ changes its distribution rate. With its transition to a general partnership holding company structure, we believe Williams will be more likely to finance large, organic spending projects at WPZ rather than at Williams, which in our opinion will provide less direct asset coverage for Williams’ creditors.”