Midstream giant Williams is spending about $1.5 billion to grow its natural gas transportation capacity by nearly 2 Bcf/d over the next few years to accommodate growing demand, particularly for exports, according to management. 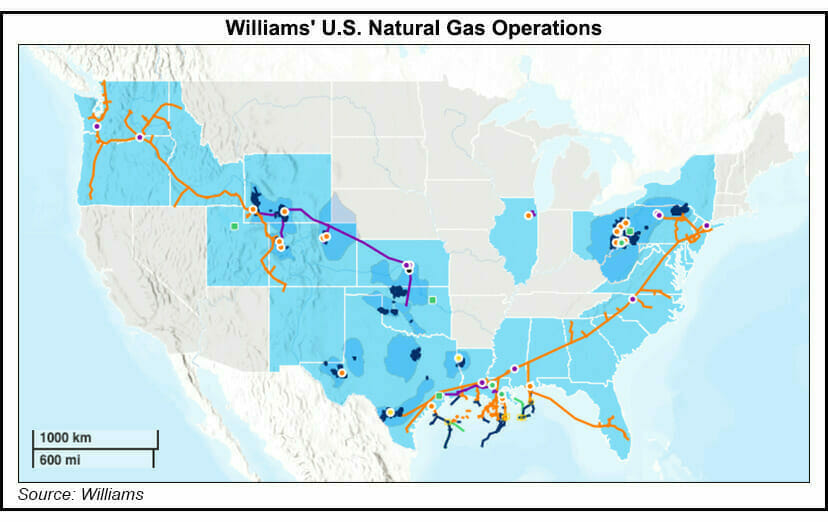 One of the six transmission projects the Tulsa-based midstreamer is developing is a 364 MMcf/d expansion on the Transcontinental Gas Pipe Line Co. (Transco) system, the country’s largest gas system. Williams management said last week it has secured customer commitments for the Texas to Louisiana Energy Pathway Project to serve liquefied natural gas (LNG) demand. It is targeting an in-service for the expansion by the end of 2025.

“As we look overseas to the energy crisis in Europe, we recognize the need for reliable, affordable and clean energy that can keep up with the growth that the world demands on a global scale,” CEO Alan Armstrong said during a first quarter conference call. “Williams has critical infrastructure connected to the best natural gas basins in the United States to serve these growing needs.”

Management cited ongoing demand for transportation capacity on the Transco system, not only for LNG but also power and industrial sectors.

On the 1Q2022 earnings call, CFO John Porter said average daily transmission volumes for Transco increased by more than 6% year/year amid record winter demand. Transco revenues, he said, are driven by reserve capacity not throughput, “but continued growth in actual throughput does highlight the criticality of Transco service.”

The higher gas price environment has done little to deter demand, according to Porter. “Admittedly, it has been somewhat surprising to us how inelastic this demand has remained.”

Meanwhile, Williams recently closed on its acquisition of Quantum Energy Partners’ Trace Midstream. The purchase more than doubled its Haynesville Shale footprint to 4 Bcf/d-plus from 1.8 Bcf/d.

As important, the deal included a long-term capacity commitment from a Trace customer to support the proposed Louisiana Energy Gateway (LEG). The project would move Haynesville supply to markets along Transco, as well as to growing industrial and LNG export demand along the Gulf Coast.

Williams continues to see upside from its commodity price-exposed rates in the Haynesville, according to Porter. It also is seeing substantially higher volumes in the East Texas/Northwest Louisiana play, which drove an 11% overall increase in volumes in the company’s West segment. The company expects the strong sequential growth trajectory to continue throughout the rest of the year, especially in the second half, driven primarily by Haynesville drilling activity.

Williams also is “close” to commercializing the LEG project, given “significant interest” by shippers. More than half of the 1.8 Bcf/d project is contracted, according to Armstrong. As part of the Trace acquisition, Quantum signed on to be an equity partner in the project.

“Our growth prospects don’t stop with these projects, however,” said Armstrong. “We see more opportunities on the horizon, even as we navigate an evolving regulatory environment.”

The CEO also discussed FERC’s recent attempt to revamp gas pipeline approvals. FERC’s response to concerns from the industry and legislators on the updated federal policies was carried out “in a constructive manner,” Armstrong said during the call.

The Federal Energy Regulatory Commission in February issued policy statements to guide how future natural gas and LNG infrastructure are permitted. Included was an interim greenhouse gas (GHG) policy that critics said would create more uncertainty and lengthier reviews for proposed projects. A month later, FERC walked back the rollout of the controversial updates. Instead, the Commission voted to seek comments on the updates and designate them as “draft” statements.

“We are optimistic that regulators recognize the need for a reliable permitting process to support natural gas infrastructure,” Armstrong said. “Importantly, key legislative leaders have renewed their focus on streamlining permitting in our country to ensure we’ve got the necessary midstream infrastructure to support our country’s LNG build-out goals.”

Williams also is “encouraged” by recent discussions with FERC and “their clear desire to see good projects that reduce emissions in the markets they serve,” said the CEO.

Elsewhere across the Lower 48, Williams reached an agreement on two gathering expansions for the rich Utica and Marcellus shale regions. The midstreamer also is expanding its reach in the Gulf of Mexico. The company during the quarter clinched a transportation and processing agreement with Salamanca producers in the deepwater, with first production expected by mid-2025. It would be Williams’ seventh tieback to deepwater assets in the past two years, according to the company.

The New Energy Ventures business segment also continues to advance. A corporate venture capital fund has been established to support direct investments in startups that leverage Williams’ assets for decarbonization solutions. There also are funds to invest in low-carbon technologies.

The company in March announced a partnership with Context Labs on a technology solution to support the gathering, marketing and transportation of independently certified natural gas from wellhead to end user. Williams also is collaborating with Cheniere Energy Inc. to study and ultimately reduce GHGs across the sector.

“So, lots of exciting things happening in this space and all positioned around supporting and enhancing our natural gas focused strategy,” Armstrong said. “You’ve heard me say before, but we remain bullish on natural gas because we recognize the critical role it plays and will continue to play in both our country’s and the world’s pursuit of a clean energy future.”

Natural gas “should be prioritized as one of the most important tools to aggressively displace more carbon intensive fuels around the world.”

With the Trace acquisition now complete, Williams expects growth capital expenditures (capex) to be $2.25-2.35 billion in 2022, a $1 billion midpoint increase from original guidance. Maintenance capex is forecast to be $650-750 million, which includes capital for emissions reduction and modernization initiatives.