Management of Williams and master limited partnership (MLP) Williams Partners has cut its expectations for revenue from operations serving rich gas production. Meanwhile, it is still waiting for market commitments that would make its proposed Marcellus/Utica-focused Appalachian Connector pipeline project a go. 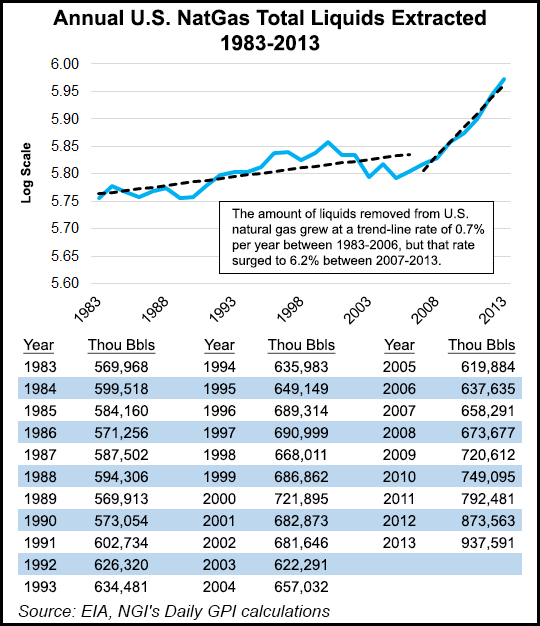 “From where we were in the previous guidance period, we’ve pulled well over $100 million out from those fee-based volumes, so we have dramatically reduced that,” CEO Alan Armstrong said Thursday during an earnings conference call.

The areas hardest hit by the commodity price downturn — and the areas where Williams has mostly trimmed its guidance — are the wet gas producing areas. “I think the gas market overall, particularly the demand side, probably doesn’t appreciate all of the nice benefit of continued supply that’s come on the backs of high-priced liquids margins,” Armstrong said. “And with those pulled out of the space right now, we think that’s going to dramatically retard drilling.”

Armstrong said Williams is “conservative and maybe even bearish” relative to its peers about where it thinks natural gas liquids prices will be for the year, and consequently is not “very bullish on people drilling for rich gas…[T]he richer gas areas are really the ones we’ve pulled back our assumptions on.”

The Appalachian Connector project would connect Western Marcellus and Utica natural gas supply areas in northern West Virginia with Williams’ existing Transco pipeline. Formerly called the Western Marcellus project (see Daily GPI, Sept. 4, 2014), it would be an expansion of the Transco pipeline designed to move up to 2 Bcf/d by late 2018. The new pipeline would extend from the Rockies Express pipeline near Clarington, OH, and Williams Oak Grove processing plant in Marshall County, WV, to Transco’s compressor station 165 in Chatham, VA.

“We are certainly still excited. We think the strengths of our market pull and the demand of our market there along the [Transco] mainline is a real positive for us. There’s been some turnover in some of the properties upstream, and certainly with the lower gas prices people are looking for creative solutions out of that area. We’re certainly working with a lot of those customers, both on the market side and the upstream side, to try to bring those two together in a way that they can firmly support our project. We’re feeling good about that…Anybody in the energy industry right now is reeling a little bit, trying to get their forward-looking perspectives pinned down before they make any major commitments. That’s where we stand on that today.”

“With the two partnerships now merged into a leading large-cap MLP focused on natural gas infrastructure, we’re further positioned to take advantage of long-term natural gas demand growth for power generation, manufacturing and exports,” he said. “We expect the new Williams Partners to generate approximately $4.5 billion of adjusted EBITDA [earnings before interest, taxes, depreciation and amortization] in 2015 from a gross margin that is about 88% fee-based, the majority of which consists of contracts with demand payments, cost-of-service rates or minimum volume commitments.”

Armstrong was asked by an analyst about cost-reduction initiatives in Williams operations and whether there might be headcount reductions to come.

“We certainly are going to put a lot of pressure on costs, and we do think that we’ve got a lot of room to do that, certainly using the combined buying power of two entities, lower material costs, lower costs on things like lube oil…On the headcount front, I would say there’s certainly a lot of those opportunities coming to us as we merger a lot of support functions. But I would say we still really need to preserve our strengths on the operating and technical side because we do have a lot of growth on that front. But it is shifting around and we will need to shift some of those resources around to be focused on where the opportunities lie. I would tell you we still are looking for great talent in the technical and operating side and we do see some opportunities on the support function side as we continue to consolidate the organization.”

Earlier this month, Williams Partners restarted its troubled Geismar, LA, olefins plant after multiple delays (see Daily GPI, Feb. 10). The plant came back from an expansion project that had been interrupted by a fire that shut down operations. The plant’s expanded capacity is to continue ramp-up through March, the company said. During February and March, production is expected to be “intermittent,” making for a limited financial contribution from the plant during the first quarter.