The backdrop of the Russia-Ukraine conflict could be an opportune time for the Biden administration to improve the United States’ oil and gas investment climate and bolster domestic energy security, the North Dakota Petroleum Council (NDPC) and other industry organizations told NGI. 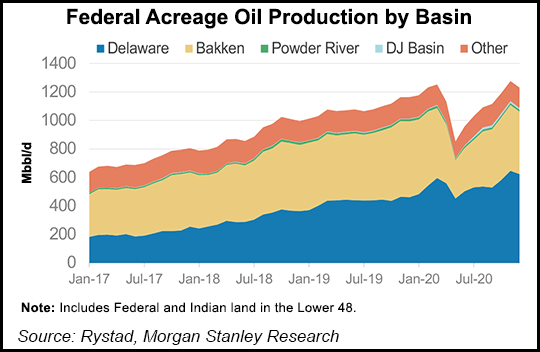 NDPC’s Brady Pelton, vice president, said that Biden “has not really been a supporter of the fossil fuel industry” and has “soured up investors in the oil and gas plays and put them at a disadvantage.”

Pelton’s comments on behalf of NDPC echo those from across the U.S. oil and gas industry, which has criticized the administration for taking actions such as halting leasing on federal land, suspending leasing in Alaska’s Arctic National Wildlife Refuge, and trying to cancel a Gulf of Mexico lease auction that a federal judge later invalidated.

In response to Russian hostilities in Ukraine, the Biden administration and Congress have taken steps to make the United States off-limits to Russian natural gas and crude oil.

“The Biden administration has immense power today to change the narrative,” Pelton said.

In North Dakota, for instance, Pelton said the administration could work on approving federal drilling permits.

“We have about 1,000 wells that aren’t being drilled because of a halt to leasing” in the Bakken Shale, he said.

Although many of the wells would be drilled on privately owned land, Pelton said that federal approval would be needed when a nexus – in this case an extension into federal land via horizontal directional drilling – exists.

“When you have a well that’s located on private, non-federal land with a lateral that extends into a unit that has federal minerals in it, a federal permit is needed,” he explained.

“I think that expanding the ability to produce those wells would have a great impact,” said Pelton. “It would also send a great message to the market that this administration supports the development of domestic natural resources.”

Along those lines, the Alaska Oil and Gas Association’s Kara Moriarty, CEO, told NGI the Russia-Ukraine conflict and its effects convey another message: the United States needs to be “truly energy independent.

“The demand for oil and gas remains, and America has plentiful resources,” she said. “We just need the right investment and regulatory framework to deliver these energy sources to the market and consumers.”

Texas Oil and Gas Association’s Todd Staples, president, said the Russia-Ukraine situation “should help reset American priorities and recognize that American oil and natural gas are produced in more environmentally responsible ways than in any other country in the world.”

Staples said the high fuel costs U.S. motorists are paying at the pump highlight “the importance of domestic energy production,” with consumers “feeling the repercussions of canceled pipeline projects, delayed approvals for permits and the discouragement of additional expansion, poor decisions exacerbated by the war.

“The administration calling on foreign countries to increase production…, rather than encouraging local jobs and local investment, had a chilling effect on expansion,” he said.

“Our call to the White House is to unleash American energy by restarting the federal leasing program, approve the permits that have already been filed, and approve the delayed or canceled pipeline projects,” he said. “It was not so long ago that we were energy secure, and while it will not happen overnight, this administration can and should get back to protecting American consumers and interests by showing the strength and might of domestic energy production.”

“The global impact of this action, in the form of significantly higher energy prices, quickly exposed the need for greater energy security in our country through policies and regulations that support oil and natural gas development rather than stifle it, which is what we are experiencing today, both in Pennsylvania and nationally,” PIOGA’s Dan Weaver, president, said.

That is easier said than done, according to industry representatives.

During a panel discussion at CERAWeek in Houston, industry executives said that boosting domestic output is not a short-term proposition.

Oil and gas “producers must acquire capital for new drilling investments, and parts and labor are not easy to come by,” she said. “The industry faces the same supply chain and workforce issues that plague many other industries in America.”

“People urging oil and natural gas companies to rapidly ramp up production to alleviate high costs do not understand that we cannot do that by flipping a switch,” said Weaver. “It takes months of time to secure permits and financing, and to drill and complete new wells, along with the need for additional pipelines and infrastructure to reach consumers.”

Marsteller urged the Biden administration to view the domestic oil and gas industry “as a partner in efforts to address our nation’s energy and climate challenges, not the enemy.

“We need to have a comprehensive discussion about our energy needs. IPAA members understand we aren’t the only solution to questions surrounding American energy, but we must be part of the conversation.”

The idea of “energy security as national security” has long garnered support from Democrats and Republicans, said the American Exploration and Production Council’s Anne Bradbury, CEO.

Given the bipartisan appeal of the issue, she said the Biden administration should advance energy security “by working with our industry on policies that support domestic production…

“To support our own energy security while expanding our ability to support our allies around the globe, the administration should restart leasing on federal lands, resume operation of the pipelines needed to cleanly and safely move energy from our companies to the American people…”

“Fighting against Russian aggression shouldn’t be a partisan issue,” concluded the Louisiana Oil and Gas Association’s Mike Moncla, president. “This is something that we can all come together on.”