In a move that did not appear to surprise analysts, Whiting Petroleum Corp. said it plans to buy Kodiak Oil & Gas Corp. in an all-stock deal valued at $6 billion that would, if approved by all stakeholders, create the largest producer in the Bakken/Three Forks. 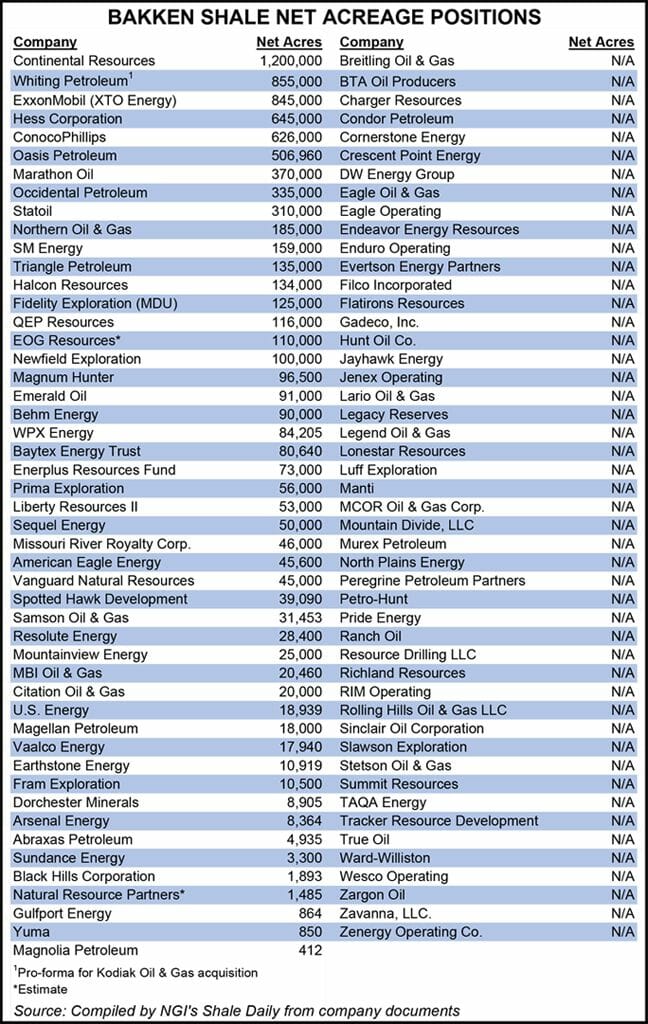 Denver-based Whiting announced Sunday that it had entered into a definitive agreement to acquire Kodiak, which is also headquartered in Denver. The deal is based on the closing price of Whiting stock last Friday, coupled with Kodiak’s net debt of $2.2 billion as of March 31.

Whiting said the merger would create the largest producer in the Bakken/Three Forks. Combined, the two companies had more than 107,000 boe/d of production in 1Q2014, and would hold 855,000 net acres and an inventory of 3,460 net future drilling locations in the Williston Basin. Whiting added that the combined company would also “drive meaningful [oil] production” and lead to faster and more efficient drilling, shared technological expertise, a stronger credit profile and greater financial flexibility.

Although a combined Whiting-Kodiak would lead the Bakken/Three Forks in terms of production, Continental Resources Inc. would still hold the largest leasehold in the play, at 1.2 million net acres. Continental reported 97,457 boe/d of production in the Bakken in 1Q2014 (see Shale Daily, May 12).

“We believe this transaction represents a significant opportunity for both Whiting and Kodiak shareholders to benefit from the strength of our combined company,” said Whiting CEO James Volker. “The addition of Kodiak’s complementary acreage position and substantial inventory of high-return drilling locations will provide the opportunity to drive significant value growth for both Whiting and Kodiak shareholders through an acceleration in drilling and increase in operational efficiencies.”

According to Volker, the deal will be accretive to Whiting’s cash flow per share, earnings per share and production per share for 2015 and increasingly accretive thereafter. The combined company would have a ratio of debt-to-2014 estimated earnings before interest taxes depreciation and amortization (EBITDA) of 1.6 times.

The deal calls for Kodiak shareholders to receive 0.177 of a share of Whiting stock in exchange for each share of Kodiak common stock they hold. The deal is based on last Friday’s closing price of $13.90/share for Whiting stock.

Whiting said its senior management will lead the combined company, while Kodiak CEO Lynn Peterson and Executive Vice President James Catlin will join its board of directors at closing, which is expected in 4Q2014. Whiting also said it had secured financing to increase its borrowing base to $4.5 billion, with commitments totaling $3.5 billion.

“This amount is sufficient to provide for all current drawings under Kodiak’s credit facility and fund the combined company’s ongoing liquidity needs,” Whiting said.

Although the boards of directors at both Whiting and Kodiak have unanimously approved the deal, it must still pass the muster of both companies’ shareholders. Regulators must also approve the deal.

During a conference call on Monday, Kodiak and Whiting executives said the combined company would target a 12-rig drilling program on Kodiak’s acreage by 4Q2015 — up from seven rigs currently — and would have a combined fleet of 26 operated rigs by 4Q2015, the largest in the basin. They also estimated that there could be savings of up to $700,000 per Kodiak well, and an additional 716 net drilling locations based in part on downspacing.

In a note Monday, Jason Wangler, an analyst for Wunderlich Securities Inc., said the $13.90/share part of the deal was “frankly…the most interesting part in our view, as Kodiak’s stock closed Friday over 2% higher than that figure and the premium as of now is just 5% above the 60-day average for Kodiak.

Wangler said Wunderlich liked the deal and issued a “buy” rating on Whiting stock with a price target of $95/share. A hold rating was issued on Kodiak stock. But Wangler said Wall Street had believed Kodiak to be for sale for years, and it was a surprise to see the going price below the market’s valuation for the company.

“Either way, a job well done for Kodiak and its management,” Wangler said. “Overall, the rise of Kodiak over the past few years has been fantastic, and it has increased the value of its company tremendously alongside the Williston Basin as it became a large oil producer. Combining with Whiting could allow investors to keep moving the value higher, and given Whiting’s performance the last few years that endgame looks very possible.”

Wangler said he thinks Whiting shareholders will “overwhelmingly approve” the deal, but he wondered if Kodiak’s would follow suit. “Many investors of Kodiak have been in the stock for a potential transaction,” he said. “And here it is but given the price, we wonder if Kodiak investors will be satisfied.”

Phillip Jungwirth, an analyst with BMO Capital Markets Corp., agreed that Kodiak has long been viewed as a “takeout candidate” on Wall Street, but he didn’t indicate that Kodiak shareholders could nix the deal. In a note Monday, BMO rated Whiting shares as “outperform” with a $90/share target price.

“We don’t see another bidder even considering the lack of premium [with the proposed deal],” Jungwirth said Monday. “Also, with the deal being an all-stock transaction, Kodiak shareholders will participate in future drilling upside driven by improvements in Bakken well results, downspacing success and development of Whiting’s Redtail Niobrara asset.”

“We are more constructive on Whiting’s pro forma asset base and believe this transaction not only mitigates capital efficiency concerns, but it also adds acreage in the central part of the basin which should respond well to new completion techniques being implemented including slickwater fracs and upsized proppant jobs,” Rowe and Dardar said in a note Monday. “The jury is still out regarding the potential of enhanced completions to improve economics on fringier acreage, of which Whiting has a ton of…This deal potentially means Whiting will not bulk up in the Niobrara via [mergers and acquisitions], contrary to our recent suspicion.”

After Monday’s conference call, Wells Fargo Securities LLC analysts David Tameron and Gordon Douthat said executives at Kodiak and Whiting had indicated that about 60% of shareholders overlap between the two companies.

“We’ve received a number of calls on the transaction price, with questions centered on the discount to Friday’s closing price,” Tameron and Douthat said in a note Monday. “Management pointed out, among other items, the ability for Whiting to accelerate the [net present value] of Kodiak’s inventory, thus boosting [net asset value].

“We get the reasoning, and although it likely won’t stop investors from questioning the final price, the overlap between Kodiak and Whiting shareholders suggests this deal goes through.”

Wangler hinted that other mergers in the industry were possible.

“[It] could be interesting to see if more public acquisitions/mergers occur as it has been a rather slow market over the past few years,” Wangler said. “Plenty of asset and private company deals have been — and still are — out there, but we wonder if this starts the buying of public companies, which could be helpful for investors.”