Whiting Petroleum Corp. has two agreements in hand to expand its operated leasehold in the Bakken Shale, and it has raised its capital budget for  2022. 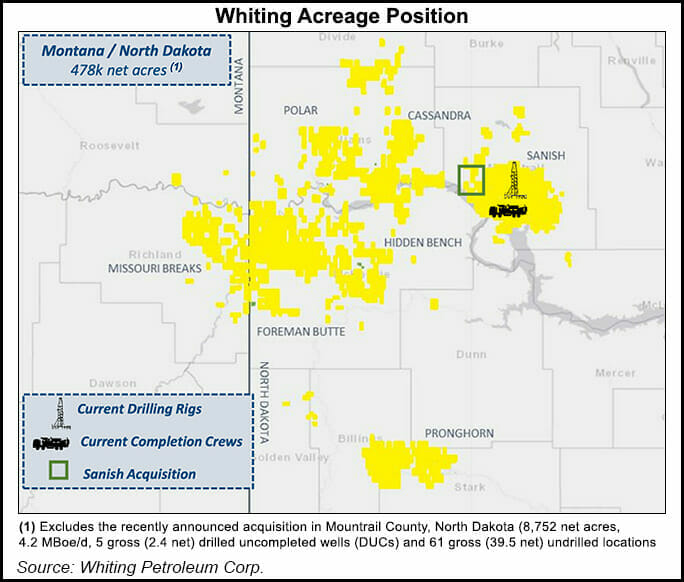 “These transactions continue the strategy we put forth beginning in late 2020,” said CEO Lynn Peterson. “By increasing our working interest, we are immediately recognizing substantial cash flow that is accretive for shareholders.

“We know and understand the Sanish field extremely well and are very comfortable with the rate of return we are achieving.”

Located in Mountrail County, ND, the assets increase Whiting’s average operated working interest to 74% from 61% throughout the Sanish area. The additional acreage would be “impacting many of the drilling units included in the company’s current 2022 development program,” management said.

The assets span 14,563 net acres and should contribute about 4,500 boe/d net production (67% oil), the company said. The smaller transaction closed in late 2021 and the larger one is slated to close by the end of March.

The assets include 32 net undrilled locations, which Whiting plans to develop in the “near term,” management said.

Whiting also announced capital expenditure (capex) guidance of $360-400 million for 2022. The company plans to have two drilling rigs and one completions crew operating in the Williston for most of the year. The rigs would operate in North Dakota’s Mountrail, McKenzie and Williams counties.

“While the company has had success with three-mile laterals in its Sanish field, Whiting plans to drill additional three-mile laterals further west in McKenzie County, North Dakota during the year, which will help improve economics on additional inventory,” management said. “As oil prices have rebounded, the company is seeing increased non-operated activity from other operators and expects this trend to continue.”

“The 2022 budget was designed with higher working interests and slightly greater activity,” management said. Whiting “encountered a delay on a five-well pad in January that will impact the timing of production until later in the year.”

Management said even though it “has shifted operations to the Sanish field, the company’s continued focus on sustainability through increasing its high gas capture percentage will result in production volumes not entirely replacing those lost by the delay.” The firm noted that low double-digit inflation has been built into its projections for the year.

In addition, Whiting announced a 25 cents/share dividend for 1Q2022. “With the expected sizable cash flow generation and the strength of the balance sheet, we believe this dividend payment is sustainable under significant commodity changes,” said Peterson. “Along with our acquisition of non-operated interests, the initiation of the dividend is the latest commitment to realize value and shareholder return.”

The CEO added, “The capital plan this year leverages our low base decline and assets across the basin to continue delivering peer leading sustainable cash flow back to our shareholders.”

Whiting announced in July that it was divesting from the Denver-Julesburg Basin of Colorado in order to focus on the Bakken.