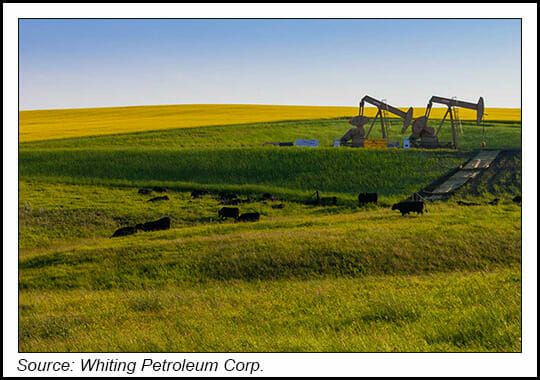 The company did not report its first quarter results in 2020, when it was in the middle of Chapter 11 restructuring.

Whiting also ramped up spending in the first quarter to $56 million compared to $21 million in the fourth quarter. The company announced in March that it had mobilized a rig to its Sanish field operations in February, and during the quarter it drilled 4.5 net operated wells. It also completed 10.6 net wells and turned in line 9.8.

Company officials said Whiting plans to continue focusing on the Sanish area of the Bakken for the next three years.

“That’s our best area,” COO Chip Rimer said on the call. “We know that area very well. And we’re seeing great results from that.”

Rimer also indicated the company may revisit its Cassandra and Foreman Butte areas, also in the Bakken, as it modifies its completions strategy.

Regarding the fate of the Dakota Access Pipeline, which moves Bakken oil production, CEO Lynn Peterson said the company secured additional crude sales and transportation arrangements in 1Q2021  “to serve as flow assurance and price protection” if the system is shut down.

“We believe we are well positioned regardless of the outcome,” he said.

The improvement in commodity prices is also expected to have a positive impact on the debt load. It expects to pay off the remaining $170 million in debt by the end of the year.