Citing the current oil and natural gas commodity price environment and what makes the most sense on a capital investment basis, Whiting Petroleum Corp. on Wednesday doubled down on its exploration and production operations in the Bakken Shale of North Dakota. At the same time, it jettisoned all of the company’s oil and natural gas assets in the Denver-Julesburg (DJ) Basin of Colorado. 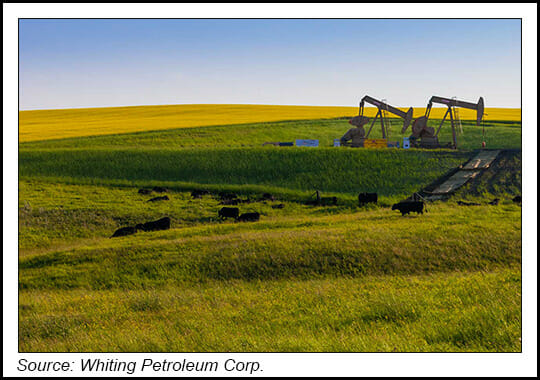 In North Dakota, Whiting said it is acquiring Williston Basin assets from a private company for $271 million. In a separate transaction announced on the same day, Whiting entered into an agreement to divest its DJ Basin assets — including associated midstream infrastructure — to a private entity for $187 million.

“These two transactions result in a significantly deeper drilling inventory in our key Sanish operating area, while divesting of properties in Colorado that were not going to compete internally for capital,” said Whiting CEO Lynn A. Peterson. “These transactions demonstrate our strategy to focus our attention on value-enhancing opportunities that compete for capital in a $50 oil environment.”

During the 1Q2021 earnings conference call, Whiting officials said the company planned to continue focusing on the Sanish area of the Bakken for the next three years.

Including both deals, Peterson now estimates that the company in a mid-$50s/bbl oil environment has more than six years of “high-quality drilling inventory,” assuming a two-rig drilling program.

The Bakken assets in the Williston being acquired include 8,752 net acres with net daily production of about 4,200 Boe/d (80% oil); five gross/2.3 net drilled and uncompleted wells; and 61 gross/39.5 net undrilled locations (100% operated).

Located in Mountrail County, ND, the properties adjoin Whiting’s existing operations in the Sanish field. According to the company, they would “require minimal additional general and administrative costs.” The assets “immediately compete for capital” within the company’s existing portfolio and are to “allow Whiting to increase capital efficiency by extending laterals on certain wells when combined with its existing acreage.”

Wells Fargo analysts Joseph McKay and Nitin Kumar saw the transactions as moving “out with the old and in with the new,” adding that the Sanish-adjacent acreage “will assist some remaining locations reach longer laterals that had not been possible prior” to the deal.

As for the DJ divestiture, the analysts noted that the sale completely rids Whiting of any future midstream commitments. “We believe expectations for the company’s Redtail asset sale were muted given prior efforts to divest the asset were unsuccessful and given what appeared to be a more limited set of potential buyers and a comparative lack of strategic development options for Whiting.”

The company expects both transactions to close in 3Q2021, with the difference in acquisition costs and divestiture proceeds funded with existing availability on the company’s revolver.