Whiting Petroleum Corp., one of the largest oil producers in North Dakota’s Bakken Shale, has nearly doubled its capital expenditures (capex) budget for 2017 with an eye to develop core acreage in the Williston and Denver-Julesburg (DJ) basins. 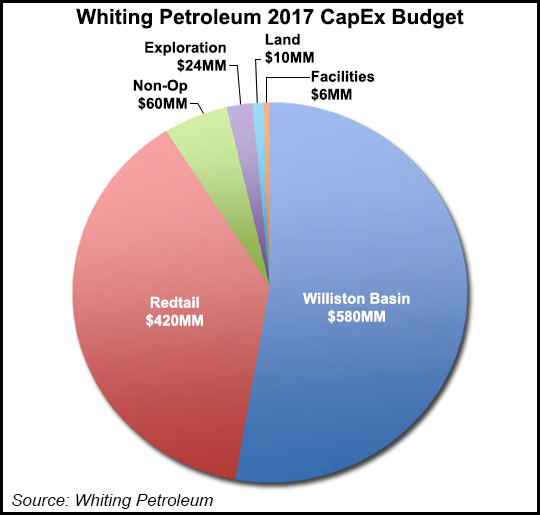 Meanwhile, even with the downturn across the industry, Whiting said it has reduced its debt by 42%, or $2.4 billion, since the end of March 2016.

The Denver-based producer plans to spend $1.1 billion on capex in 2017, compared with $554 million in 2016. Most of the budget, $1.06 billion, is being devoted to develop its core acreage in the Williston and in the DJ of Colorado.

Specifically, Whiting plans to run a five-rig drilling program and spend $580 million in the Williston Basin. It will also run one rig and spend $420 million on its Redtail development program, targeting the A, B and C intervals of the Niobrara and the Codell/Fort Hays formations. Activities in the DJ Basin include completing 105 drilled but uncompleted (DUC) wells.

During a conference call to discuss 4Q2016 on Wednesday, Whiting executives said the plan for its Redtail DUC wells is heavily weighted to the second half of 2017, with 15 wells being completed in the first half of 2017 (1H2017) and the remaining 95 in 2H2017.

“It comes on pretty strong right at the end of the summer there and then continues to stay pretty strong,” said CFO Mike Stevens.

“We’re about four wells into that program right now and have had some very good initial results,” Williams said. “Essentially, what we’re doing is we’re grinding in all our refracks with our development. So, as we put rigs out into any one of our areas, we’ve already catalogued now and prioritized all the refrack opportunities.

“We are working those in with the completion of our new wells, to make it sort of seamless. In total we figure that we’ve got somewhere in the neighborhood 200 pretty good opportunities for refrack, but you’ll see those as just a regular part of our development program.”

Whiting’s pro-forma debt totaled $5.65 billion at the end of March 2016, but the company brought it down to more than $3.3 billion by the end of December. Most of the reduction resulted from converting $477 million to equity last May and another $1.09 billion last December, leaving more than 362 million shares outstanding.

After closing on the sale of its midstream assets in North Dakota for $375 million last month, Whiting used $275 million of the proceeds to redeem all of its outstanding 6.5% senior subordinated notes that were due in 2018. The company also reduced its bank debt with $300 million in proceeds from its North Ward Estes sale, and $150 million of operating cash flow in excess of capex.

Whiting held 735,968 gross (443,839 net) acres in the Williston Basin at the end of 2016, 99% of which was held by production (HBP). The company’s average working interest was 60% in the basin, where it also had 5,334 potential gross drilling locations at year’s end. Whiting also cited figures from the North Dakota Industrial Commission that showed an initial 90-day average rate of 1,203 boe/d for wells completed in the Bakken between December 2015 and November 2016.